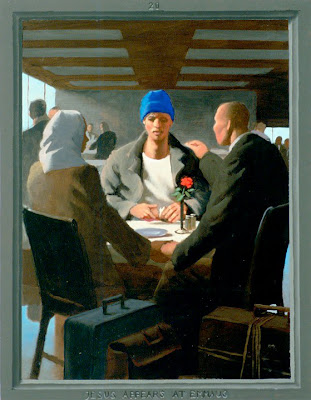 20. Jesus Appears at Emmaus (from The Passion of Christ: A Gay Vision) by Douglas Blanchard
“When he was at table with them, he took the bread and blessed, and broke it, and gave it to them. And their eyes were opened and they recognized him.” -- Luke 24:30-31 (RSV}

Three travelers share a meal together in “Jesus Appears at Emmaus.” Jesus is hard to recognize with his hair hidden under a blue ski cap. He sits at a restaurant table with a man and a woman, breaking a loaf of bread as they touch in an attitude of blessing. The setting looks like a contemporary airport lounge with large windows and a table nicely set with a red rose and generic salt and pepper shakers. Suitcases in the foreground confirm that they are traveling.

It is an unremarkable scene of friends eating together, until the viewer recognizes Jesus. And that is the point. The painting illustrates the Biblical story of two disciples who meet the risen Christ, but don’t know it is him. They encounter a stranger on the road to Emmaus, a village seven miles from Jerusalem. They tell him about their sadness over Jesus’ crucifixion and the disappearance of his corpse, and the stranger uses scripture to explain what happened. Impressed, the disciples persuade him to join them for supper in Emmaus. When Jesus blesses and breaks the bread, they suddenly recognize him.

The Supper at Emmaus has been a popular subject in art history for centuries. Jesus is commonly shown in a hat to explain why his disciples fail to identify him. Artists of the past have assumed that both disciples were male, but Blanchard brings the scene into the present and makes one disciple female, subtly communicating that Jesus’ connection with people was not limited by gender.

The Emmaus story has intriguing parallels with queer experience. The disciples discover Jesus after they leave their spiritual community in Jerusalem, where the leaders of the Jesus movement are hiding in fear, refusing to believe in the resurrection. The disciples on the road are like LGBT people who turn their backs on institutional religion -- and then find God on the outside! In the Bible narrative  the disciples return immediately to Jerusalem to tell the other disciples that they met the living Jesus. Likewise, many LGBT Christians feel called to return to the church to proclaim their fresh understanding of the all-inclusive Christ.


“They said to each other, ‘Did not our hearts burn within us while he talked to us on the road, while he opened to us the scriptures?’ And they rose that same hour and returned to Jerusalem.” -- Luke 24:32-33 (RSV)
A couple of Jesus’ friends met a stranger on the way to a village called Emmaus. While they were traveling together, they told the stranger about Jesus: the hopes he stirred in them, his horrific execution, and Mary's unbelievable story that he was still alive. Their hearts burned as the stranger reframed it for them, revealing how all things can work together for good. They convinced him to stay and have dinner with them in Emmaus. As the meal began, he blessed the bread and gave it to them. It was one of those moments when you suddenly recognize the presence of God. The stranger was Jesus! He had been with them all along. Sometimes even devout Christians are unable to see God’s image in people who are strangers to them, such as LGBT people or others who have been marginalized. Sometimes people are blind to their own sacred worth as incarnations of the divine. But at any moment, the grace of an unexpected encounter may open our eyes.
God, help me to recognize you.
___
This is part of a series based on “The Passion of Christ: A Gay Vision,” a set of 24 paintings by Douglas Blanchard, with text by Kittredge Cherry. For the whole series, click here.

Scripture quotations are from Revised Standard Version of the Bible, copyright © 1946, 1952, and 1971 National Council of the Churches of Christ in the United States of America. Used by permission. All rights reserved.
Posted by Kittredge Cherry at 11:06 AM

I think it is Mr and Mrs Cleopas. Earlier she is spoken of as one of the women at the tomb. Now they are going back to their home village of Emmaus - where they work in a garrison town for Roman soldiers. They invite the stranger to their home for the evening meal - not wanting him to be in danger on the road at night and also because of the exciting conversation. The old feelings stir in his presence and when he breaks the bread -- he is there fully, as he is at all meals of friends, family and love.

Yes, Cleopas is the name of one of the disciples given in the Emmaus story in the gospel of Luke. I like the idea of “Mrs. Cleopas.” Ann, I appreciate the way you bring the meaning of the event into our lives today, with Christ’s presence at every meal, wherever two or three are gathered in his name.

After posting this I read a thought-provoking interpretation of this painting by Rev. Barbara Crafton, two whom the Passion series is dedicated: “The pair of disciples eating with Jesus on the road to Emmaus appear to be Muslim: one of them is female, and wears a hijab. Their worn suitcase sits between them. They're refugees.”

The idea that Jesus shares a meal with Muslim travel companions is especially powerful in light of the 9/11 context in which Doug painted this series.