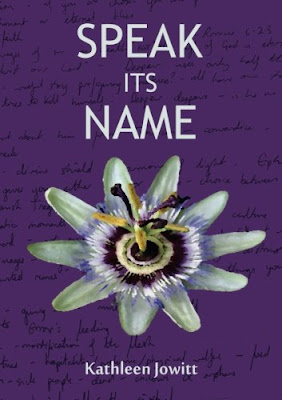 Speak Its Name
by Kathleen Jowitt
Reviewed by Audrey Lockwood

“Speak Its Name” by Kathleen Jowitt is the coming-of-age story of a lesbian who leads the Christian group at a British university.

During the many challenges of her freshman year, Lydia holds on to her faith even as she falls in love with an out-and-proud Methodist bisexual woman. It was her Great Awakening.

The novel is especially engagin for lesbian Christians to read. It’s uncommon in all of literature to have a lesbian character in a Christian context. Rarely since Radclyffe Hall has it been attempted. The connection between lesbians and gay men in the novel adds to its richness.

The author captures the excitement of being a new leader and the atmosphere of a university in an English town. I like the way it focuses on the human relationships of students working together. The Oxford atmosphere and British English are charming. It is fun reading terms like “freshers” instead of “freshmen.”

The writing quality is superior and literate. One flaw is that there are too many characters and not enough character development of each one.

The opposition faced by LGBTQ people in “Speak Its Name” shows that the religious right is not just an American phenomenon.

The LGBTQ group in the novel is saner than the LGBTQ religious communities I have known. During my own college years in the 1970s, I went to a Catholic guitar mass at a funky student center at a public Big-Ten university. Our liberal views were influenced by Vatican II and the anti-war movement. This book shows the backlash against liberalism, presenting the new generation whose college experience is more conventional and conservative with right-wing fanatics.

Audrey Lockwood is a lesbian poet based in Los Angeles. Her poetry has been published in Lesbian News and was Poem of the Month at Writers at Work. Her previous articles for the Jesus in Love Blog include LGBT authors laugh, cry and get honored at Lambda Literary Awards and Meeting Alma Lopez: Painter of queer saints, mermaids, revolutionaries and goddesses.


Posted by Kittredge Cherry at 7:51 AM