I made a video to wish everyone a wonderful new year in 2008. Be sure to watch this 30-second video to see the gorgeous poinsettias near our home -- and to find out why I believe 2008 will be a great year.
Posted by Kittredge Cherry at 4:51 PM 1 comment:

For example, Annunciation by Swedish photographer Elisabeth Ohlson Wallin shows the Madonna and her female lover are portrayed by a lesbian couple, pregnant through artificial insemination.

The photo is included in my new book Art That Dares: Gay Jesus, Woman Christ, and More. In our interview for the book, Ohlson Wallin told me how she created the striking, mysterious image. Here are some excerpts from Art That Dares:

She combined the dual influences of Christianity and queer consciousness to create a groundbreaking series of twelve photos showing Jesus in a contemporary LGBT context. It became one of Europe’s most noticed and notorious art exhibits, even arousing the disapproval of Pope John Paul II—who reacted by canceling his planned audience with the Swedish archbishop.

Ohlson Wallin called the series Ecce Homo, a pun meaning “See the human being” and “See the homosexual.” …

She enlisted local LGBT folk to serve as models, and they spent three years meticulously recreating scenes from the life of Christ based on the artistic masterpieces of Michelangelo, Caravaggio, Rubens, and others….

“It’s very important for me in my work that the picture have a documentary truth mixed with the way I arrange the story in the picture,” Ohlson Wallin said. She and her models played with the contradictions….

“I wanted Jesus for me and my own sexual sense. I wanted to be able to identify with Jesus. There are millions and billions of Jesus pictures for heterosexuals to identify with. In Africa they have black Jesus. In China they have Chinese Jesus. Lots of different countries each have a different Jesus.” …

The exhibit went on to tour Scandinavia and continental Europe from 1998 to 2000, winning awards and breaking several attendance records. More than 250,000 people viewed it. Not everyone liked what they saw. A man with an ax destroyed two of the photos. People threw stones at Ohlson Wallin and she needed police protection after receiving death threats….

Ohlson Wallin recorded the whole span of Jesus’ life, death, and resurrection, beginning with the announcement of his coming birth. In her version, the Madonna and her female lover are portrayed by a lesbian couple, seven months’ pregnant through artificial insemination. The angel Gabriel comes in the form of their gay male friend, who floats in with a message from God—and a test tube for insemination.

May everyone experience God born anew in their hearts this Christmas season!
Posted by Kittredge Cherry at 2:56 PM No comments: 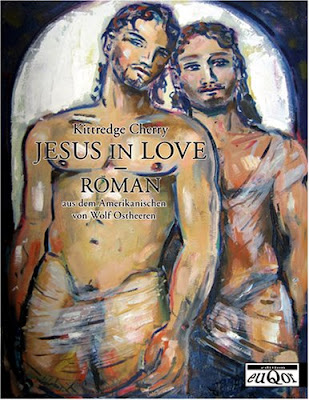 A homoerotic Christ on the cover of a new German book is sparking international debate as Christmas approaches.

The provocative cover appears on the German translation of Jesus in Love, my novel about a queer Christ.

The cover art by Berlin painter Alexander von Agoston shows a near-naked Jesus and John the Baptist rising from the water together after Christ’s baptism. The men’s genitals shine through their wet clothes. A shared halo affirms the union of body and spirit.

“German readers are used to seeing nudity on covers, much more than Americans,” my publisher told me. “Sure, the cover attracts attention. That’s what a cover is for.”

Gay-positive Christian images are needed now because conservatives are using religious rhetoric to justify discrimination against queer people. The cover goes all the way in showing that God loves gays. Jesus is completely comfortable in his skin. Now I’m sure that it’s the right cover for the German edition.

The German translation of Jesus in Love was released in time for Christmas by Edition EuQor, a start-up German press specializing in provocative books.

“When Jesus in Love was published in English, websites in Germany buzzed with excitement,” the publisher told me. “The idea of a bisexual Jesus seemed to fascinate Germans more than anyone else outside the English-speaking world. Soon Edition EuQor offered to do a German translation.”

Reactions to the Jesus in Love cover vary widely from delight to shock and disdain, even within the gay, lesbian, bisexual and transgender (GLBT) community.

The original English version of Jesus in Love was published in 2006 by AndroGyne Press with a more romantic cover drawing of Jesus and John wreathed in roses. Conservative Christians attacked the novel as blasphemy because it portrays a Jesus who felt sexual attraction to men. However, it received praise from literary critics and GLBT Christian leaders.

Mel White, founder of the GLBT Christian activist group Soulforce, endorsed the English version. “Kitt Cherry has broken through the stained-glass barrier,” White said. “This is not a prurient look at the sex life of Jesus, but a classic re-telling of the greatest story ever told.”

Theology professor Carter Heyward called it “a lovely, gentle, playful book.” Toby Johnson, author of “Gay Spirituality,” described it as “a wonderful, gay-sensitive, and delightfully ‘shocking’ reassessment of the stories of the old-time religion.”

What do YOU think of the new book cover? Please post your comments here or email them to kitt@JesusInLove.org.
Posted by Kittredge Cherry at 12:11 PM 2 comments:

Jesus in Love is launching a monthly e-newsletter about queer spirituality and the arts, including highlights from this blog and my other projects. Headlines in the December issue include: The new format includes color images and other cool features. It is being launched now as a Christmas gift from JesusInLove.org. We’re working with a professional newsletter service to provide info in an increasingly attractive, accessible way. People are already sending enthusiastic responses to the first issue. “Very nice, sophisticated, uncluttered newsletter -- with some interesting info as well,” wrote one reader. “Impressive,” said another. I see it as a way to foster two-way communication, and I hope that readers will contact me with ideas and suggestions. I’m excited about taking Jesus in Love to the next level with this newsletter, and I look forward to keeping in better touch with all my supporters in the new year.

At any time you can click a link at the bottom of the newsletter to unsubscribe in an easy, automated way. Please give it a try!
Posted by Kittredge Cherry at 5:10 PM No comments:

Here is the new vision statement-in-progress for Jesus in Love. The new vision statement grew out of input from our supporters. We will continue to revise it based on your responses. Jesus in Love serves gay, lesbian, bi and trans (glbt) people who have spiritual interests, and our allies. We promote queer spirituality and the arts, with an emphasis on books and images. We believe that God loves all people, including sexual minorities. We believe that the creative process is sacred. We hope that the new visions, especially the gay Jesus, will free people to experience the divine in new ways and lead to a more just world. What do you think of our new vision statement? Please post your comments or email them to kitt@JesusInLove.org. A big thank-you to the many people who sent comments on our previous vision statement. Your vision and support are invaluable!
Posted by Kittredge Cherry at 4:47 PM No comments: