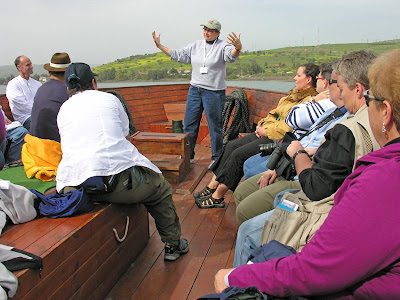 Rev. Nancy Wilson preaching on the Sea of Galilee to MCC tour group (photo by elbrandt)
When a Christian lesbian makes her first trip to Israel, her experiences are sure to be different from the usual Holy Land travelogues.

I was touched and I laughed out loud -- sometimes both at the same time -- when I read Rev. Nancy Wilson’s account of her recent tour of Israel. It rings true to the unexpected adventures and coincidences of international travel as a queer Christian.

Nancy is moderator of Metropolitan Community Churches and a leader in the GLBT Christian movement. Her full account of the MCC tour of Israel is posted at MCCchurch.org, but she gave permission to share some highlights on the Jesus In Love Blog.

***
When you are a Christian preacher who grew up in the church, as I did, your heart and imagination live in that little piece of real estate on the Mediterranean Sea in ways that are deep and meaningful -- but that are not necessarily connected to the Israel of today.

… It felt almost surreal to me to wake up in a hotel in Tiberias and share breakfast with Marsha Stevens-Pino, who organized our tour, and to point to the Sea of Galilee just outside our window. She was startled; she had not realized we were right there! We felt a little giddy and shook our heads. The last time Marsha had been here was in 1972, when she opened for Billy Graham with her music group, Children of the Day.

…There is a picture of me, later that first day in Galilee, preaching on a boat as we crossed. The boat trip started out a bit oddly. The sweet men who served as captain and first mate began our ride across the Sea of Galilee by hoisting an American flag and playing the Star Spangled Banner on a CD player. We were all kind of stunned. No doubt they did this as a gift to us; no doubt they thought we would be touched and moved. But on the Sea of Galilee, with all of its deep biblical history? Talk about a mood killer!

…At Beit She'an, there is a huge valley and Greek amphitheater. As we sat near the top, our guide told us that this was the very place where Saul and Jonathan were slain. [Our tour guide] Moshe recited David's lament for them from II Samuel in Hebrew, as a touring choir from somewhere in Europe sang Taize music. As Moshe and I walked up a large hill to the Canaanite and Egyptian ruins, I told him about my book, and offered a queer interpretation of the biblical story of David and Jonathan. He was skeptical, but agreed to read Our Tribe if I sent it to him -- and I have.

Our arrival into Jerusalem was met by a glorious sunset! The sun perfectly illuminated the rose-colored Jerusalem stone. As we arrived, they were playing the tearjerker Palm Sunday standard, "Jerusalem." (On the same CD player, I wondered?) Part of me felt a little manipulated by that. Instantly I thought of Doug, the drag queen-turned-choir director of Church of the Trinity MCC, who died last year from his addictions, complicated by HIV and diabetes. Doug and I sang that song on Palm Sunday for several years in a row and I cannot hear it without thinking of him. I had to let him go when his addictions got so out of control that he could not function. He was angry and left town, but returned at the end to die, and we were able to reconcile and say our good-byes. He was a gifted choir director, not even 50 years old. He was a mess. And I loved him. And of all things, there was that damned song playing as we pulled up to this gorgeous first view of the Holy City.

Moshe asked me to read Psalm 122, "I was glad when they said to me, 'Let us go to the house of the Lord!' Our feet are standing within your gates, O Jerusalem." But I choked up as I tried to read the words and found myself crying. So I handed the Bible to Paula and she read the passage. Then we tumbled off the bus, leaning on each other, looking out over the Holy City and experiencing waves of awe, grief, joy and wonder. Marsha spoke of friends who had died, mostly friends who died of complications from HIV and AIDS, whom she promised to meet again one day at the Eastern Gate. Yes, that Eastern Gate, the one right there.

There's something, I guess, about one's first time to see Jerusalem. Our guide was surprised, I think, and moved to see this group of LGBT folks and friends so emotional at the sight of this city that has cradled three of the world's religions; the site of Jesus' death and resurrection. We kept straining our necks to take in the panorama of the city, and we kept wiping the tears from our faces. Finally, reluctantly, we got back on the bus.

… A group of us had a late dinner one evening with 10 young people from the Jerusalem Open House. These were English-speaking staff and participants at Jerusalem's LGBT Center. Some of them were straight, most were Jews; they came from many countries. All of them were young; they were studying Torah or law or politics in this religiously and politically dense city. They were happy to meet our group of middle-age and older LGBT folks from the U.S. A young lesbian couple was fascinated by those of us who have been together 10, 20, and 30 years. They wanted to talk about the U.S. elections and about religion and homosexuality. They had heard about MCC's work in Jamaica and they wanted to help. We laughed and talked, and we gave a ride home to a young Scottish Jew who's former partner, as it turned out, was the manager of our hotel (small world, after all!)....
_________
Click here for more photos of the trip by elbrandt
Posted by Kittredge Cherry at 4:54 PM 1 comment:

My book Art That Dares is one of five finalists in the LGBT Arts and Culture category for this year’s Lambda Literary Awards. The awards recognize excellence in the field of lesbian, gay, bisexual, and transgender literature. Lammy winners will be announced May 29 at a gala ceremony in West Hollywood, CA. I’ll also be participating in a reading for Lambda Literary Award finalists at 7:30 p.m. Thursday, May 8 at A Different Light Bookstore, 8853 Santa Monica Blvd., West Hollywood. The five books in the Arts and Culture category are: The recent flowering of queer visibility in popular culture is examined by scholars in Media Queered. Packed with color illustrations, Art That Dares profiles a diverse group of 11 artists whose art has been called blasphemous. The world’s leading queer filmmakers and screenwriters discuss their challenges in interviews in The View From Here. Feeling Backward, a book of literary criticism, weighs the costs of moving into the mainstream for GLBT culture. An insightful journalist writes profiles and personal essays on gay themes in popular culture in Other Men’s Sons. For tickets and more info, visit LambdaLiterary.org. ________ Kittredge Cherry blogs at the Jesus in Love Blog and edits the Jesus in Love Newsletter on queer spirituality and the arts. She offers GLBT and progressive spiritual resources at JesusInLove.org.
Posted by Kittredge Cherry at 6:03 PM No comments:

Come hear Kittredge Cherry and other Lambda Literary Award finalists read from their books at 7:30 p.m. Thursday, May 8 in West Hollywood, CA.

The reading is hosted by A Different Light Bookstore, 8853 Santa Monica Blvd., West Hollywood. Kitt will read from Art That Dares: Gay Jesus, Woman Christ, and More, which is one of five finalists in the LGBT Arts and Culture category.

Christopher Rice, novelist and Lambda Board member, will be doing the introductions. Authors scheduled for the West Hollywood reading are:

The Lambda Literary Foundation sponsors readings around the country prior to the Lammy Awards ceremony. This year’s 20th anniversary ceremony will be held on Thursday, May 29 at the Pacific Design Center in West Hollywood. For tickets and more info, visit LambdaLiterary.org.

My book Art That Dares: Gay Jesus, Woman Christ, and More has been named a finalist for the 20th annual Lambda Literary Awards, also known as the Lammies.

The awards recognize excellence in the field of lesbian, gay, bisexual, and transgender literature. They are considered to be the highest honor for a book from the GLBT community.

Lammy winners will be announced May 29 at a gala ceremony in West Hollywood, CA. The glamorous event is the queer literary version of the Academy Awards.

Art That Dares is one of five finalists in the LGBT Arts and Culture category. It’s up against Harvard University Press among others -- quite an accomplishment for a small start-up queer press.

Three legendary figures of the LGBT literary community will receive Pioneer Awards at this year’s ceremony. They are Ann Bannon, author of the Beebo Brinker lesbian fiction series; Mark Thompson, author of Gay Soul; and Malcolm Boyd, Episcopal priest and author of Are You Running With Me, Jesus?

I will also participate in a reading by Lammy finalists in West Hollywood in early May. Details will be announced later.

Becoming a Lammy finalist makes me feel honored and grateful to the 11 contemporary artists who share their art in my book, which is packed with color illustrations. Art that dares to show Jesus as gay or female has been censored or destroyed. I gathered these beautiful, liberating, sometimes shocking images into a book to ensure that they would be available. In the book, the artists tell the stories behind the images. My introduction puts them into political and historical context, exploring issues of blasphemy and artistic freedom.

I’d love to see some of my supporters at the Lammy ceremony. For tickets and more info, visit LambdaLiterary.org.