A lesbian looks back at wimmin’s music

Singer-songwriters Ferron and Bitch make music together on video above. Ferron is on the right and Bitch on the left in the photo below from Short Story Records. 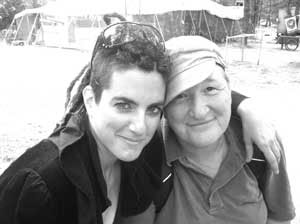 I’ve fallen in love with a “wimmin’s music” song that I hated when I was a twenty-something lesbian in the 1980s. Almost a quarter-century has passed since I heard lesbian folksinger Ferron sing “Shadows on a Dime,” but the song plays over and over in my mind lately. I used to find the song depressing. Now it feeds my spirituality and seems haunting and true, probably because I am in the position that Ferron sings about: I'm looking backward down the track To see us dreamers in our prime. I remember when I bought the Ferron cassette tape in 1984 in the tiny women’s bookstore in my hometown of Iowa City. I was living in Japan and came home for a visit. My partner and our other American friends gave me long shopping lists of hard-to-find items that I was supposed to buy for them while I was in the States. Ferron’s “Shadows on a Dime” was on my partner’s list, and I tracked it down at the hole-in-the-wall women’s bookstore. No doubt that store is long gone, like most of the other women’s bookstores. My partner loved that Ferron tape and played it over and over despite my objections that it was gloomy. The meandering, almost tuneless melodies became etched in my mind against my will. Time passed, we moved to California, the tape broke. Lesbian feminist women stopped calling themselves “wimmin” (coined because we didn’t want anything to do with “men”)… but I never forgot the song. And I grew to love it. Today I longed to hear “Shadows on a Dime” for real, so I looked it up on Google. Wow, now I can watch Ferron singing it on video! I can buy an updated version on her new album Boulder

, released just three months ago. I can print out all the lyrics, which were muffled and mysterious until now: A tethered bird in a tethered cage… The song turns out to be about working in a factory and loving another woman. It has an authentic working-class voice that is seldom heard in lesbian-oriented media today. I learned from Ferron’s website that critics call her “the Johnny Cash of lesbian folksinging.” Her bio is full of amazing details, like how she ran away from home as a teenager, but couldn’t turn to the Catholic Church for help -- because they had banned her for using the word “bra” in the church youth group. And Ferron is still touring! In fact, TODAY she happens to be playing at the Iowa Women’s Music Festival in my hometown, Iowa City. So I’m posting this today as a tribute to Ferron, who shaped my spirit with lyrics like this: But I don't forget the factory I don't expect this ride to always be Thanks, Ferron. I never hear stuff like this on “The L-Word.”
Posted by Kittredge Cherry at 5:22 PM 1 comment:

Novels show Jesus from the heart

My Jesus in Love novels about an erotically alive Jesus are compared to the Christ the Lord novels of bestselling author Anne Rice in the following review. I am honored by the comparison made by Atlanta writer Trudie Barreras, and excited about her insight into the books. Trudie chose to write the following piece because she was impressed by the books and the connections between them. She sent her reflection to both Anne Rice and me. So far, Ms. Rice has not responded.


The Wisdom Way of Knowing
by Trudie Barreras

This reflection takes its heading unashamedly from a small volume with the same title published in 2003 by Cynthia Bourgeault. Her book The Wisdom Way of Knowing

is subtitled “Reclaiming an Ancient Tradition to Awaken the Heart.” In this book, as in the conferences in a recent retreat I attended which Cynthia directed, she emphasizes the importance of “heart knowledge” as opposed to “head knowledge”. This is not describing “emotion” in the usual sense of feelings of affection or eroticism so much as a deep awareness of the reality of love as a creative force. This is the type of love referred to in 1 John 4:18 (“perfect love casts out fear”).

A deep deprivation that I think current believers have experienced is the failure of our spiritual guides to help us to open up to this heart knowledge. In essence, along with the conflict between science and religion, we have tended to boil everything down to creeds and dogmatic assertions, none of which actually speak to the reality of life as we know it. Also, there is a complete failure to truly experience Jesus as both divine and human. Most especially, in this era of obsession with sexuality, which the churches demonize and the secular world worships, there is a complete refusal to deal with the possibility of the human aspect of Jesus as a sexual being.

Two authors whose works I have read and re-read since January of 2008 deal with this problem in powerful novels. They are Anne Rice, author of Christ the Lord: Out of Egypt: A Novel

Although the works are very different in some ways, they are marvelously similar in others. I will share some brief reflections on each to illustrate my thoughts, although I don’t want to go into so much detail that I would “spoil the stories” for anyone who hasn’t read them.

Rice’s first book, meticulously researched from a historical perspective, has to infer a great deal about the way the child Jesus perhaps grew into an awareness of his human/divine nature from very few scriptural clues. I believe she has accomplished a remarkable explication of “how it might have been”, and her story drew me totally into context in which Jesus might have begun to discover his calling. The story is poignant, beautiful, and one I wanted to share with a number of friends and family. Her second book deals with some major cultural factors that might indeed have led Jesus to his “revolutionary” rejection of the legalism and moral judgmentalism of the Jewish culture of his time. Her story begins with the description of what is essentially a “gay bashing” of two innocent young boys, and proceeds to discuss the near destruction of a beautiful young girl because her father thinks she has been “dishonored”. In both her books, Rice describes the difficulties Jesus might have encountered because of the “questionable” manner of his conception and birth. Her perception brings into clear focus the difficulties posed by legalistic attitudes that insist God is more concerned about justice than mercy.

Cherry in essence begins where Rice’s narrative ends, that is, with Jesus going into the wilderness after his baptism in the Jordan, the calling of the disciples, and the marriage at Cana. Cherry’s primary objective is to depict Jesus as fully human in terms of sexuality, while maintaining, as Rice does, that Jesus was not genitally sexually active. Her rational for this, which I find marvelously sensitive and cogent, is that Jesus realizes his divine nature would inevitably produce an “imbalance of power” that would not permit the full and free interaction of “consenting adults” which sanctifies all human sexual interaction. Jesus also recognizes, in Cherry’s vision, that he is “married” to the Holy Spirit. After his Resurrection, the consummation of this marriage will in essence allow him to be married to every believer, and to the entire Church, a theme that surfaces powerfully in the Epistles.

I believe that Cherry’s descriptions of the eroticism between Jesus and various of his followers are beautifully and tastefully handled. Most important, I believe her writing truly sanctifies sexual love. I have been waiting a long time for someone to put into such powerful terms a truth that I’ve long felt but have been personally unable to articulate. I have been extremely uneasy that in the years since the “sexual revolution” began – years when Lady Chatterley's Lover

went from being the ultimate in risqué to very ho-hum compared to the paperbacks available in every supermarket – the churches and our culture have continued to equate sex with sin. Even Metropolitan Community Church, which I hoped might give us some meaningful progress in terms of developing a sexual ethic in continuity with the Law of Love seems to have been unable to meet the challenge. Cherry’s book, however, in describing vividly and reverently what Jesus might have done, and how he might have perceived himself as a sexual being, provides that long-awaited insight.

I recently shared with Kittredge, and she featured on her Jesus In Love blog, a photograph of my “Nursing Madonna” statuette, and the story about the way in which Mary’s “nudity” was covered up with a Kleenex poncho by some member of the First MCC of Atlanta congregation when I put the statue on display in our meditation chapel. This is, indeed, exactly what I hope that Cherry’s wonderful novels will eventually counteract – a degree of prudishness that fails to deal with the true reality of Jesus as God With Us and the Holy Spirit as the “Beloved” who marries us to our true nature as a community of loving believers in Christ.
________

Trudie Barreras is a writer and a member of First Metropolitan Community Church of Atlanta. She may be contacted by e-mail at: tbarreras@bellsouth.net.


Posted by Kittredge Cherry at 1:17 PM No comments: