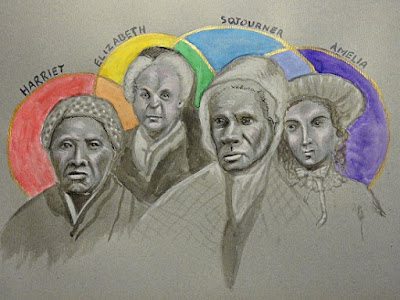 A vision of equality that inspired people “through Seneca Falls, and Selma, and Stonewall” is celebrated as a holy feast day on July 20. Four 19th-century American women reformers -- Elizabeth Cady Stanton, Amelia Bloomer. Sojourner Truth, and Harriet Tubman -- are honored on this date in the Episcopal calendar of saints.

All advocated abolition of slavery as well as women’s rights. The first Women’s Rights Convention ended on July 20, in 1848 in Seneca Falls, NY.

President Obama made connections between women’s liberation, LGBT equality and African American civil rights in a famous line from his 2013 inaugural speech: “We, the people, declare today that the most evident of truths, that all of us are created equal, is the star that guides us still, just as it guided our forebears through Seneca Falls, and Selma, and Stonewall,” he said.

Stanton used similar language based on the Declaration of Independence when she wrote the American Declaration of Rights and Sentiments signed by attendees at Seneca Falls, including this line: “We hold these truths to be self-evident: that all men and women are created equal.” 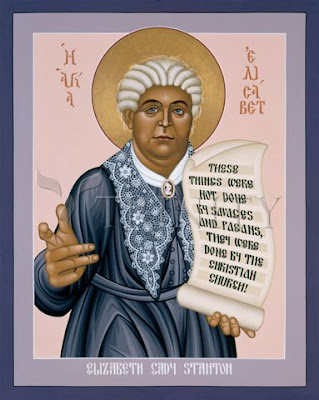 Stanton (1815–1902) was a leader of the early women’s rights movement and one of the organizers of the Seneca Falls conference. Her faith led her to critique the church itself for degrading and discriminating against women.

Raised in the Presbyterian Church, she was outraged by the exclusion of women Bible scholars in the 1870 revision of the King James Bible by an all-male committee, so she founded a committee of women to write the landmark 1895 commentary “The Woman’s Bible.” The controversial work uses book-by-book Bible commentary to challenge prevailing religious beliefs with a liberating theology of equality between the sexes. (A similar work for the LGBT community is “The Queer Bible Commentary,” although it uses many authors to do what Stanton did singlehandedly.)

Stanton is often remembered with Susan B. Anthony because the two women were close friends who collaborated for more than 50 years on women's rights and other reforms. They shared “one of the most productive working partnerships in U.S. history,” according to the documentary “Not for Ourselves Alone: The Story of Elizabeth Cady Stanton and Susan B. Anthony,” directed by Emmy Award-winning film maker Ken Burns.

Anthony has been called the “third person” in Stanton’s marriage to her husband. Stanton was a married mother of seven, but she and Anthony traveled together giving speeches over the course of three decades.

Amelia Jenks Bloomer (1818-1894) was an advocate for temperance and women’s rights. Her name became associated with the loose trousers known as “bloomers” because of her advocacy of women’s dress reform in an era of tight-waisted corsets.  She is the one who first introduced Stanton and Anthony to each other. Bloomer was raised Presbyterian and her activism was based on her faith. “The same Power that brought the slave out of bondage will, in His own good time and way, bring about the emancipation of women, and make her the equal in power and dominion that she was in the beginning,” she said.

Sojourner Truth (1797–8 to 1883) was an escaped slave who became a traveling preacher. She is best known for her speech “Ain’t I a Woman?” She delivered it at the Ohio Women’s Rights Convention in 1851 after listening for hours while clergy use Biblical justifications to attack women’s rights and abolition. For her prophetic witness, she was known as “the Miriam of the Latter Exodus,” after the biblical prophet Miriam.

Harriet Ross Tubman (1820–1913) escaped slavery to lead more than 300 others to freedom through the Underground Railroad and later served as a spy for the Union Army during the Civil War. She was deeply influenced by the Bible story of Moses following God's command to deliver the Israelites from slavery in Egypt. Tubman believed that God called upon her to oppose slavery and help deliver American slaves out of bondage. She became known as "the Moses of her People," which is the subtitle of her 1869 biography written by her friend Sarah Bradford.

All four women for freedom are pictured together with rainbow colors in an icon by Tobias Haller, iconographer, author, composer, and vicar of Saint James Episcopal Church in the Bronx.

“It came to me in a flash that this would be an appropriate symbol for this early Rainbow Coalition for Freedom. I also like to think of it as a Feminist Rushmore!” he said.

He is the author of “Reasonable and Holy: Engaging Same-Sexuality.” Haller enjoys expanding the diversity of icons available by creating icons of LGBTQ people and other progressive holy figures as well as traditional saints. He and his spouse were united in a church wedding more than 30 years ago and a civil ceremony after same-sex marriage became legal in New York.

Both Stanton and Bloomer attended Trinity Episcopal Church in Seneca Falls. Truth and Tubman were both involved in African Methodist Episcopal churches. Today the Episcopal Church honors these four female freedom fighters with the following prayer:

O God, whose Spirit guides us into all truth and makes us
free: Strengthen and sustain us as you did your servants
Elizabeth, Amelia, Sojourner, and Harriet. Give us vision
and courage to stand against oppression and injustice and
all that works against the glorious liberty to which you
call all your children;
through Jesus Christ our Savior, who
lives and reigns with you and the Holy Spirit, one God, for
ever and ever. Amen.

Posted by Kittredge Cherry at 9:47 AM