Thanks to everyone who worked and prayed to make this happen!

My email in-box is overflowing of statements from various LGBT religious groups:

“Freedom and equality won today as the Supreme Court ruled in favor of the US Constitution and every family.” -- Rev. Dr. Nancy Wilson, moderator of Metropolitan Community Churches

“As members of the Catholic Church and citizens of the United States, we are elated that the U. S. Supreme Court has both struck down the Defense of Marriage Act and cleared the way for marriage equality in the state of California. We are especially pleased to see that Justice Anthony Kennedy, a Catholic, wrote the opinion striking down DOMA, and that Justice Sonia Sotomayor, who is also a Catholic, concurred in this historic decision.” -- Equally Blessed, a coalition of four Catholic organizations

“Today, the U.S. Supreme Court has struck down DOMA’s Section 3 and dismissed California’s Proposition 8 case on lack of standing. These historic rulings affirm that all families deserve equal respect and treatment under the law.” -- Joseph Ward, director of Believe Out Loud, an online network empowering Christians to work for LGBT equality

“June 26, 2013 will be remembered as the day this nation took two giant steps forward toward making liberty and justice for all not just a pledge but a reality for LGBT Americans. By affirming the federal district court ruling that found California's Prop 8 unconstitutional, and by striking down Section 3 of the federal Defense of Marriage Act (DOMA), the Supreme Court made history with rulings that told all loving and committed couples who marry that they deserve equal legal respect and treatment.” -- Rev. Susan Russell, Episcopal priest and past president of Integrity, in Huffington Post

“I welcome today’s decision of the United States Supreme Court that strikes down the 17-year-old law prohibiting federal recognition of same-sex civil marriages granted by the states. …
I am deeply aware that faithful Americans find themselves on all sides of these issues, including those who have not yet clearly discerned an effective or appropriate response. It is possible to disagree AND work together for the good of the larger community. That is the bedrock of our democratic political system. It is also the foundation of life in the Body of Christ. “
--- The Most Rev. Katharine Jefferts Schori, presiding bishop of the Episcopal Church in an official statement

Last but not least:
“I applaud the Supreme Court’s decision to strike down the Defense of Marriage Act. This was discrimination enshrined in law.” -- President Barack Obama 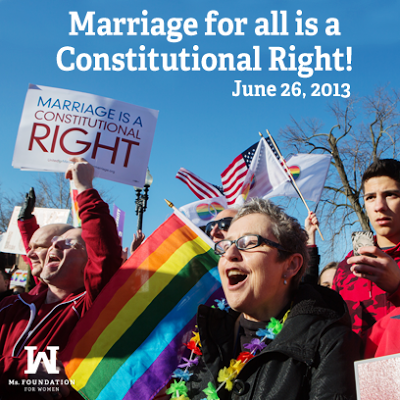 Thanks to the Ms. Foundation for Women for permission to share the image “Marriage for all is a Constitutional right! June 26, 2013.”

Posted by Kittredge Cherry at 10:45 AM

The Supreme Court rulings are surely to be celebrated. However, Marriage Equality/Equal Rights under the Law for LGBT people is still not the LAW of the LAND. Until a federal civil rights issue arises which will force a decision assuring equality in EVERY state...LGBT persons will continue to be discriminated against. A battle has been won but the war continues. We will overcome for the Truth is on our side.

I focused on celebration yesterday, but Dave you’re right that the struggle is far from over. There are only 13 states where same-sex marriage is legal. That leaves 37 without marriage equality. And lesbian and gay couples in many other countries also lack the right to marry. In addition, Tuesday’s Supreme Court ruling struck down parts of the Voting Rights Act. We seem to lose some rights as we gain others. People in some states may not be able to vote for the legal changes needed to pass marriage equality there. Still, rulings are supreme progress. Thanks, GayteKeeper, for celebrating with me