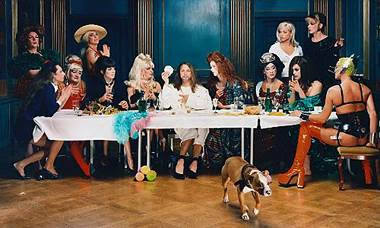 Two thousand police in riot gear were present to maintain security for the exhibit, which recreates 12 scenes from Christ’s life in a contemporary LGBT context.

According to news reports, protestors were especially enraged by her version of the Last Supper, which shows a transgender or cross-dressing Jesus in high heels as he shares a meal with his queer apostles, including transgenders, transvestites and at least one person in leather fetish gear. The image reflects the Biblical theme that Jesus welcomed everyone, including outcasts.

Those who objected to the show included ultranationalists, members of the Serbian Orthodox Church and the Islamic community.

“Ecce Homo” has been causing controversy since it was first exhibited in 1998. It became one of Europe’s most noticed and notorious art exhibits, even arousing the disapproval of Pope John Paul II—who reacted by canceling his planned audience with the Swedish archbishop when “Ecce Homo” was shown at Uppsala’s National Cathedral.

“Ecce Homo” toured Europe (but not Belgrade, Serbia!) from 1998-2000, winning awards and breaking attendance records. More than 250,000 people viewed it, but a man with an ax destroyed two of the photos and Ohlson Wallin needed police protection after receiving death threats.

Ohlson Wallin created Ecce Homo in the late 1990s after losing many friends to AIDS. She got mad when some Christians said that the disease was God’s punishment for being gay. Grief and anger became the motivation for her powerful, transformative images. “I wanted to show that love is for everyone,” she told me in an interview for  my book Art That Dares: Gay Jesus, Woman Christ, and More

I’m a lesbian Christian author who believes that Christ represents everybody, including sexual outcasts. Two thousand years ago Jesus taught love and justice and was killed for it. One of the charges that led to his crucifixion was blasphemy—the same charge that is being leveled against Ohlson Wallin and other artists who make LGBT Christian art. Today queer people of faith are reclaiming our power and creating new images of the divine based on our own experiences. I am grateful to the artists who are pioneers on this sacred path.

Posted by Kittredge Cherry at 11:59 AM

Unfortunately the majority of people can not look past the images...which are shocking at first...to the message that Jesus came to love any and all...met all persons where they were and who they are...unconditional love. The Church emphasized His Divinity to such an extent that we all have forgotten His very human nature which He shared with us. Thus, portray any thing than a man with an uplifted gaze and a sickening sweet awestruck countenance and the fires of rage start within us.

Welcome, Dave446. Yes, Elisabeth’s art and the protests that it ignites both point to one of the inherent challenges of Christianity: How can Jesus be both human AND divine? The same theme plays out in LGBT people of faith and wherever anyone seeks to follow Christ’s example.