For a new version of this article, click this link to Qspirit.net:
Malcolm Boyd: Pioneering gay Episcopal priest who ran with Jesus 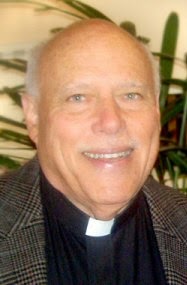 I knew Malcolm personally as a fellow author, a colleague in LGBT ministry, and a good-natured friend who shared my passion for Taize music. He worked in the film industry with Mary Pickford, was ordained in 1955, was a “Freedom Rider” for civil rights in 1961, and officially came out as gay in 1977.

At my invitation, he contributed to my book “Equal Rites: Lesbian and Gay Worship, Ceremonies and Celebrations” and was the keynote speaker at a Taize Festival that I organized in Los Angeles in the 1990s. In a wonderful keynote speech, he described his stay at the Taize monastic community in France in 1957.

His 35 books include “Gay Priest: An Inner Journey.” I remember the fun and excitement of attending his Los Angeles reading for “Amazing Grace: Stories of Lesbian and Gay Faith,” which he edited with Nancy Wilson. His best-known book is “Are You Running with Me, Jesus?” a collection of conversational prayer-poems with a million copies in print. This 1965 spiritual classic includes “Prayers for Sexual Freedom” with a section that begins “This is a homosexual bar, Jesus.”

He and his longtime partner Mark Thompson married in 2013 after same-sex marriage became legal in Califorina.

Malcolm wrote two prayers for “Equal Rites.” I was pleased when he agreed to contribute to the book, and even more delighted when I read his manuscript. Unlike most writers, he submitted text that required no editing because it was already perfect. Here is an excerpt from his “Coming-Out Liturgy”:

Leader: What kind of repression?
Participant: I am a gay man / a lesbian. I have suffered the repression of not feeling that I could share my true identity with other people.
Community: We welcome you.

Leader: Have you felt isolation and loneliness?
Participant: I have. The cold waters of fear have covered my body and wounded my soul. I have sensed desolation and utter aloneness. I have suffered misunderstanding and even been greeted by others as someone who was a total stranger to me...
Community: We offer you validation for yourself as you have been created and celebration of your gayness as a gift of God.

Leader: What do you seek now to do with your life?
Participant: I seek freedom. I want to be myself and find acceptance and love. I never want to have to wear a mask again. I want other people to appreciate me for who I really am. I want to make an honest contribution to life in an open way, without any lies or ambiguity.
Community: We offer you the assurance of freedom....
Participant: I am ready now to set my feet on the path to freedom.

Boyd’s life story is told in the book “Black Battle, White Knight: The Authorized Biography of Malcolm Boyd” by Michael Battle, an Anglican/Episcopal priest who has served the church in many capacities. The title reflects the dialogue between Battle, a younger black heterosexual priest, and Boyd, an older white gay priest who gave him unparalleled access to his personal recollections, writings, and archival records.

If a Tree Falls in the Forest... Remembering Rev. Malcolm Boyd by Nancy Wilson (Huffington Post)

Malcolm Boyd: Reflections from me and Louie Crew by Susan Russell (Inch at a Time)

Mark Thompson, Author, Photographer, Historian, Friend Dies at 63 (thepridela.com)
___
This post is part of the LGBTQ Saints series by Kittredge Cherry. Traditional and alternative saints, people in the Bible, LGBTQ martyrs, authors, theologians, religious leaders, artists, deities and other figures of special interest to lesbian, gay, bisexual and transgender and queer (LGBTQ) people and our allies are covered.

Posted by Kittredge Cherry at 10:31 PM