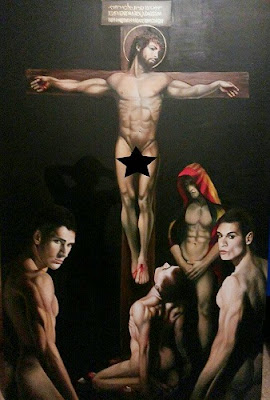 “Crucifixion” by Christopher Olwage (oil on canvas)
A sacred vision of homosexuality and Christianity appears in monumental nude paintings of Jesus and the men he loved by gay New Zealand artist Christopher Olwage. His crucifixion painting will go exhibit starting tomorrow (Feb. 11) at the Auckland Pride Festival.

Olwage is a gifted artist and LGBTQ activist, but he is best known as a professional dancer. Fans call him “the Black Swan” for his pointe ballet performances. In 2013 he danced on “New Zealand’s Got Talent” and won the Mr. Gay World contest for the second year in a row. Born and raised in South Africa, he has lived in New Zealand since 2002.

He has completed three large-scale paintings of Jesus interacting with his Beloved Disciple and other Biblical men in classic scenes from the life of Christ: “The Last Supper,” “Ecce Homo” and “Crucifixion.”

“They are part of a series that I am devoting to the discourse on sacred sexuality, Christianity and homosexuality,” Olwage told the Jesus in Love Blog. “The themes are not new by any means but this is my take on them... I have been reading many discourses on the Beloved disciple, I myself studied ancient Greek at University, and religion has always been a passion. These artworks have been many years in the making...” 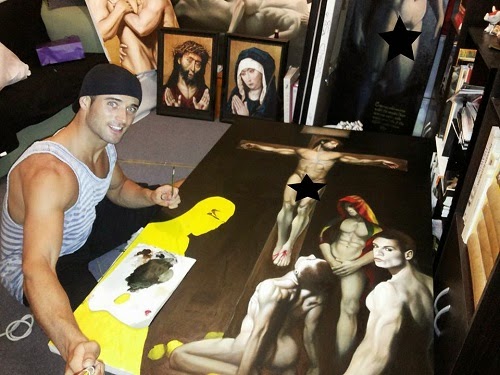 Christopher Olwage paints gay visions of Jesus and the man he loved
In “Crucifixion” Olwage shows a group of men reacting in various ways to Jesus on the cross. All are figures that Bible scholars believe may have had male-male sexual relationships. John, who is most often identified as the Beloved Disciple and lover of Jesus, kneels and throws his head back, overcome by emotion. Lazarus, who is also considered a possible sex partner of Jesus, bows his head in sorrowful prayer beneath a rainbow hood.

The scene is framed by a male couple: the Centurion on the left and the youth “who was dear to him.” Scholars say they may have been in an “erastes-eromenes” sexual relationship, but Jesus gladly healed the youth at the Centurion’s request.

Olwage’s art is informed not only by his queer religious studies, but by his personal experience of suffering and new life. In his moving video “I am the Black Swan,” he dances as he describes his transformation from an “ugly duckling” into the Black Swan. He was an overweight gay youth, bullied into attempting suicide, but he grew into the proud gay artist, activist and dancer that is he is today.

“Crucifixion” is part of the annual “Rainbow Youth Pride Art Exhibition” on display Feb. 11 to 26 at Studio One, 1 Ponsonby Road in Auckland. The exhibit showcases creativity from a range of young, emerging, and established LGBTQ (and allied) artists exploring sexuality and gender diversity in relation to politics, history, communities and identity.

YouTube videos feature his appearance on "New Zealand's Got Talent," "I am the Black Swan" and his Dance Works Showreel.

Copyright © Kittredge Cherry. All rights reserved.
http://www.jesusinlove.blogspot.com/
Jesus in Love Blog on LGBT spirituality and the arts
Posted by Kittredge Cherry at 7:09 PM

This one is gorgeous, Kitt! Thanks so much!!!