For a new version of this article, click here

“Thomas or Thomasine Hall” by the Corpse Debutante
Thomas(ine) Hall was an intersex person in 17th-century colonial America who caused controversy by switching back and forth between genders. The Jamestown court ruled that Hall was both “a man and a woman” and ordered him/her to wear male and female clothing simultaneously. Hall’s story is presented here for Intersex Day of Remembrance (Nov. 8), also known as Intersex Solidarity Day.

For a new version of this article, click this link to Qspirit.net:
Thomas(ine) Hall: Intersex in colonial America

A baby was born in England around 1603, baptized by the name Thomasine and raised as a girl. Hall began alternating between male and female identities upon reaching adulthood. Hall cut his/her hair and served as a in the English military, fighting in France against Catholic persecution of the Protestant Huguenots.  Next Hall earned a living as a woman doing needlework and making lace.

Hall heard of job opportunities in North America. Around 1626 s/he switched to male attire and took a ship to Virginia, where he worked as a male servant. Gossipy neighbors noticed that Hall changed between male and female dress and mannerisms, and rumors spread that Hall had both male and female sex partners.

Neighbors tried to settle the gender question with careful inspections of Hall’s body during sleep and at other times. Results were indeterminate, since Hall lacked a “readable set of female genitalia" and had a “small penis” (one inch long). Apparently Hall had the condition that modern society calls hermaphrodite or intersex.

An official inquiry was begun and reached the court of Jamestown, Virginia in 1629. With Governor John Pott presiding, the court heard from Hall and several witnesses. In the first such decision in early colonial history, the court ruled on April 8, 1629 that Hall had a “dual nature” and was both “a man and a woman.”

In Europe such cases had been resolved by forcing the person to adopt one gender permanently. But Hall was ordered to pay a fine and wear a mixed-gender outfit men’s clothing with a woman’s s cap and apron. The court’s goal was to subject Hall to shame and ridicule with this hybrid attire. Nothing definite is known about what happened later in Hall’s later life. 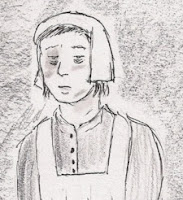 A portrait of Hall in her/her unisex attire was sketched by an artist who blogs under the pen name Corpse Debutante. “All we can really know is that Tom Hall must have been the most alone soul in the world at that moment, and furthermore, that s/he looked ridiculous,” Debutante wrote when  posting the portrait on her blog.

There was no church yet in Jamestown at the time of Hall's trial, but Puritan theologians generally considered such people “abomination unto the Lord” (based on Deuteronomy 22:5) for threatening society’s use of clothing to distinguish men and women. Some contemporary theologians such as Susannah Cornwall see intersex people as providing a valuable challenge to rigid religious assumptions. Her books include “Sex and Uncertainty in the Body of Christ: Intersex Conditions and Christian Theology.”

Hall’s life is described in books such as “Founding Mothers and Fathers: Gendered Power and the Forming of American Society” by Cornell University history professor Mary Beth Norton,
a chapter by Kathleen M. Brown in “The Devil's Lane: Sex and Race in the Early South” and a  chapter by Mary Norton in “Through a Glass Darkly: Reflections on Personal Identity in Early America.” Journalist Don Floyd wrote a historical novel based on Hall’s life titled “The Captain and Thomasine: Jamestown's Intersexual Outcast Redeems A Patriot's Dream.”

Intersex Day of Remembrance, also known as Intersex Solidarity Day, occurs on the birthday of French intersex person Herculine Barbin. Philosopher Michel Foucault published her memoirs in “Herculine Barbin: Being the Recently Discovered Memoirs of a Nineteenth-Century French Hermaphrodite.” Intersex Day of Remembrance tends to be celebrated in Europe, while North America emphasizes Intersex Awareness Day on Oct. 26. Some countries honor both events and the whole period between as “Fourteen Days of Intersex.”
___
Thanks to Heath Adam Ackley for the tip.

Posted by Kittredge Cherry at 8:02 AM