For a new version of this article, click this link to Qspirit.net:
Queer Nativity scenes show love makes a family 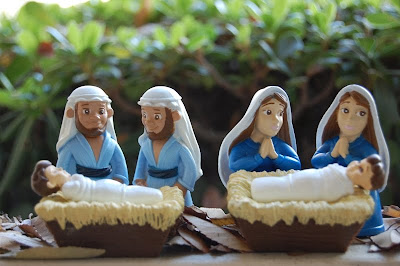 Gay and Lesbian Nativity Scene (Love Makes a Holy Family series) by Kittredge Cherry ©2009
More photos below
I created my own gay and lesbian nativity scenes this Christmas season. One has two Marys at the manger with the baby Jesus, and the other has two Josephs with the Christ child.

I put Mary with Mary and Joseph with Joseph -- like putting two brides or two grooms on top of a wedding cake!

Obviously this is not about historical accuracy, but I believe that they are true to the spirit of the Christmas story in the Bible: God’s child conceived in an extraordinary way and born into disreputable circumstances. Love makes a family -- including the Holy Family. Everyone should be able to see themselves in the Christmas story, including the growing number of LGBT parents and their children.I also filmed a video about my gay and lesbian manger scenes and even made them available as Christmas cards.

Go ahead and imagine that Jesus has two mommies. According to the Bible story, Joseph was an adoptive father anyway. The Virgin Mary had Jesus without sex with a man -- much like lesbian mothers who use artificial insemination.

I invite others to make their own queer nativity scenes. It’s not hard. Just get two standard nativity sets, then mix and match. Please email me a photo of your creation and I’ll post it at the Jesus in Love Blog.

I bought identical nativity sets, but I’d love to see couples that come from different sets -- a dark-skinned Mary with a light-skinned Mary, for example.

Actually, rearranging the Holy Family is not as simple as it seems. Be sure to buy a set with freestanding figures. In many cases Mary, Joseph and Jesus are wedded together in one inseparable, three-headed blob. What does that say about our attachment to idealized, sanctified heterosexuality?

I got the idea for queering the crèche last year when I heard that a gay and lesbian Nativity scene was planned for the 2008 “Pink Christmas” festival in Amsterdam. Live actors were supposed to play a pair of Marys and a pair of Josephs. I had my own lesbian Christian spiritual awakening while waiting for the event.

I remembered going to a huge exhibit of Nativity scenes back when I was a young lesbian in seminary. They had hundreds of statues of Mary, Joseph and baby portrayed as every conceivable racial and ethnic identity. Not once did I consider that my own community was missing -- there was no lesbian version with Mary and another woman. Nor was there a gay version with Joseph and another man.

Looking back some 20 years later, it finally occurred to me that LGBT families should be represented in the mix. I had a personal breakthrough as I realized that my mind was still trapped in heterosexual assumptions about the cast of characters at Jesus’ birth.

I imagined that the Amsterdam LGBT community would enact Nativity scenes of loving lesbian and gay families like those that I have known. Scenes of a lesbian Madonna and her female partner with the baby Jesus have been created by artists such as Elisabeth Ohlson Wallin of Sweden and Becki Jayne Harrelson of Atlanta. But this was the first time that I’ve seen a gay Joseph and his male partner with the Christ child.

The Pink Christmas event turned out to be a disappointment to me. It featured a drag queen and a leather daddy who seemed like a parody of themselves, with no loving “family” connection to each other whatsoever. You can see photos and videos of it in my post from last year, “Can you imagine? A gay nativity scene.”

But the Amsterdam event planted the idea in my mind for making the manger scene my own as a lesbian Christian. I feel more connected to God every time I look at the loving lesbian and gay manger scenes in our living room. My partner and I even toyed with the idea of getting two sets of Nativity lawn decorations and turning our yard into a big old queer Christmas display. Maybe next year.

__________
Update: I also hope to do other gay and lesbian Nativity scenes with racial diversity in the future. Until then, enjoy these images from the Queer Nativity project that I sponsored. 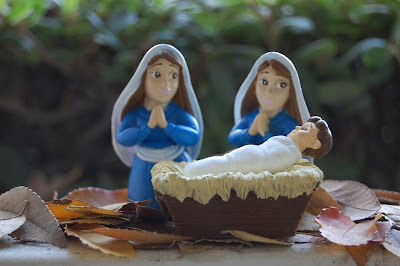 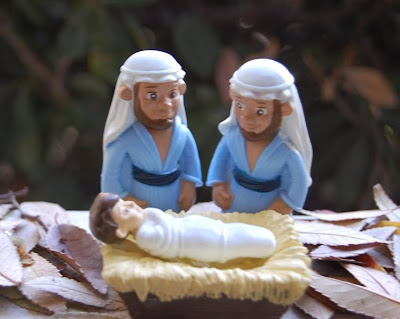 Posted by Kittredge Cherry at 11:33 AM

Although there were some fascinating comments on the previous post on the transgendered Jesus, I decided not to weigh in on that because I really lack experience. I do believe that it is very important to keep emphasizing the concept you handle so well in "Jesus in Love". God, and therefore Jesus, is in no way bound by our human understanding of what makes a "family", or what is "possible" or "permissible" in terms of reproduction. Obviously, we need to keep expanding our horizons and, as several of your bloggers commented, get out of the rigid mindset of Patriarchy.

I love the gentleness and compassion of your responses to the commentaries.

Thanks, Trudie and Eric, for your supportive comments. It’s always interesting to see who comments on which post.

I’m glad that you both understand this post as being about “expanding our horizons” and “nothing limits the divine.”

Eric, I am struck by your statement, “Anything I might consider of God necessarily limits the Divine.” It reminds me of this line from the opening of the Tao Te Ching: “The name that can be named is not the eternal Name.” I often think of that quote when I’m in discussions about God. No matter what I say about God, the opposite is also true!

Trudie, I’m glad you appreciate my responses to the comments. Suddenly this blog seems to be getting a lot more comments, and I’m focusing more attention on trying to come up with valuable replies in a timely fashion. This task still feels new to me. Such instant dialogue was impossible in the world of books and print journalism where I learned to be a writer. It’s the advantage (and challenge) of the Internet.

Thanks, Jon. I was born in Iowa and lived there until graduation from the University of Iowa, so I can’t help feeling a special excitement when I get a comment from another Iowan such as yourself.

I read your profile and wish the best for you as a gay father and for your whole family. I'm glad that this post spoke to you.

Those statues are too cute! And I agree, the message behind them is great!

Ok so I am going to be the "bad guy" here and say that this is a mockery of God! Obviously in God's eye's homosexuality is a sin and I strongly doubt he is ok with people making nativity scenes with gays as the parents of his son Jesus Christ! You are mocking God by doing so. You can love who you wish but loving someone of the same sex in a sexual way is a sin whether you like it or not. Just sayin!

The anonymous negative comment above is one of many that came in today after some conservative bloggers discovered the gay and lesbian Nativity scenes that I created.

Hi, could I please have your consent to use the pic of gay nativity on my blog? I have given myself the onerous task of a Nativity a day for this week.

Julie, yes indeed, you have permission to post my gay Nativity on your blog. Please include a link back to the Jesus in Love Blog.

A lot has happened since this was first posted -- including an attack by Christian conservatives and a Queer Nativity Scene contest
which is now underway with work by 7 artists. I can relate to your “onerous task of a Nativity a day” because that’s what I’m doing as I post the new Queer Nativity submissions.

You are truly one, sick, perverted pig. Do humanity a favor and kill yourself.

I decided to let this hateful comment stay this time so people can see what kind of negativity I face for doing this LGBTQ-affirming Christian blog. I usually delete these comments, but that may give readers a false sense of security.