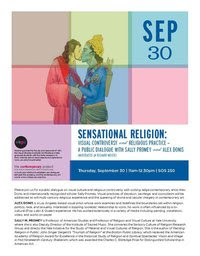 [Update: This event has been canceled.] “Sensational Religion,” a public dialogue on visual culture and religious controversy, will be held Thursday, Sept. 30 at the University of Southern California in Los Angeles.

It will be moderated by USC art history professor Richard Meyer, author of “Outlaw Representation: Censorship and Homosexuality in Twentieth-Century American Art

Speakers will include Los Angeles artist Alex Donis and Sally Promey, professor of religion and visual culture at Yale.

They will discuss the queering of divine and secular imagery in contemporary art. Visual practices of devotion, sacrilege, and iconoclasm will be addressed, as will multi-sensory religious experience.

Donis is a cutting-edge artist with a “tri-cultural” identity: pop, queer, and Latino. He sparked sparked controversy by painting kisses between unlikely same-sex pairs, including “Jesus and Lord Rama,” which is on the poster for the event. It has also appeared previously on this blog and in the book “Art That Dares: Gay Jesus, Woman Christ, and More

The event will run from 11 a.m. to 12:30 p.m. in Room 250 of the Social Sciences Building on the USC campus. More info is available at the “Sensational Religion” Facebook page.

Posted by Kittredge Cherry at 11:28 AM

Alex Donis just informed me that the “Sensational Religion” event is canceled. I don’t know any other details at this time.

I was starting to worry that right-wing fundamentalits had somehow forced USC to cancel this event! But Alex tells me that it was canceled due for health reasons, and will be rescheduled later.