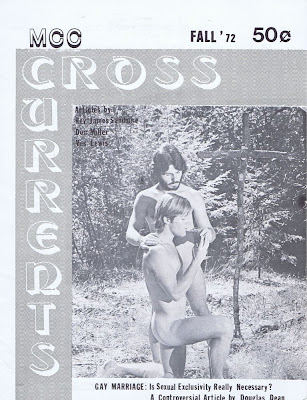 Cross Currents Fall 1972 cover with photo by Damon de Winters
A church magazine with a nude cover photo of a gay Christ figure with his friend was banned in 1972, but you can see it now at the Jesus in Love Blog. Almost 40 years later the photo is still risqué -- and beautiful.

The photo by Damon de Winters appeared on the cover of the fall 1972 issue of “Cross Currents,” the quarterly magazine of Metropolitan Community Church of San Francisco. The models, Todd and David Eric Charon, were positioned to discreetly hide any frontal nudity.

The photo seems to portray a gay Jesus with his Beloved Disciple. The bearded Christ figure offers a loving touch and a chalice of wine to his kneeling friend. Behind them stands a cross built from natural logs. The image echoes the Last Supper, when Jesus says, “Drink of it, all of you; for this is my blood of the covenant” (Matthew 26:27-28).

The MCC-SF board of directors banned the magazine for release because they felt that the cover was “inappropriate for a church publication,” recalls Lynn Jordan, who served as editor-in-chief of Cross Currents. Jordan recently celebrated 40 years of membership at MCC-SF.

“Senior pastor Reverend Jim Sandmire received a lot of criticism over this issue of the magazine,” Jordan says.

In response to the uproar, Rev. Sandmire wrote an open letter dated Nov. 15, 1972. “While I do not think the cover or other pictures of nudes are in any way obscene, I believe the nudity does not enhance the religious message intended, and may detract from it,” Rev. Sandmire wrote at the time..

A headline on the cover also brings up another subject that remains surprisingly contemporary: “Gay marriage.”

Thank you, Lynn Jordan, for providing this Cross Currents cover image so it can finally reach its audience. It is historically, spiritually and artistically significant.
______
P.S. I received this update today from Lynn Jordan: “I spoke with founding member Frank Howell (now 72) who said he thought the photo tried to convey that we bring with us both our sexuality and spirituality when we receive communion.”

Thanks Lynn and Kitt for bringing this to light. It's incedibly important to document the his and herstory of LGBT spirituality, and how we developed our ideas of what was appropriate or not appropriate.

A critique is all the more valuable when it is within a group, and when we look from within, we'll have a powerful creative artistic and spiritual force.

This is very different from battling the enemies of lesbian and gay nation from the outside, because they would not have the sophistication to get the nuance of what is appropriate for gays and lesbians within a gay or lesbian context, not as a comparison to heteronormative forces.

Given how much else has changed since 1972, I am glad that this lovely photograph is finally being revisited. Thank you, and Lynn, for sharing it.

Wow!!!! Great and beautiful picture! and even more that it was banned by our very own MCC!!!!

but the greatest thing is something else: I just did a workshop for the European MCC Confernce, on many of the images from "Art that dares" and people found it much less offencisve and challenging than inspiring for their own art work.... somebody imidieatly dray a transgendered female to male christ! Thank God that times change!

P.S. I received this update today from Lynn Jordan: “I spoke with founding member Frank Howell (now 72) who said he thought the photo tried to convey that we bring with us both our sexuality and spirituality when we receive communion.”

I will also add this info to the main post as a postscript.

To me it just looks like two nice, sexy guys. Sorry folks, but I just don't see what it's got to do with Jesus.

Catholic Boy: The blog article explains how it relates to Jesus: "The photo seems to portray a gay Jesus with his Beloved Disciple. The bearded Christ figure offers a loving touch and a chalice of wine to his kneeling friend. Behind them stands a cross built from natural logs. The image echoes the Last Supper, when Jesus says, 'Drink of it, all of you; for this is my blood of the covenant' (Matthew 26:27-28)."

Regardless, questionable content & interpretation or not, it seems pretty clear that the intention was indeed to portray a homoerotic photographic image of Christ and his Beloved at the time.

Thanks, Jon, for your clear and simple perspective, but I would go one step further. I believe Jesus made it emphatically clear that his purpose on Earth was to promote love, and to share his presence in ALL our activities and interactions with one another. Simply BECAUSE the sharing of love and life in the context illustrated in the photograph has been so denigrated and maligned by our uptight culture, I believe that it is indeed ALL ABOUT who Christ is in our midst to share the vision.

This photo is provoking some great discussion. As Turtle Woman says, sometimes it seems like all the censorship comes from outside the LGBT community, but the history of this photo shows that we are also having an internal dialogue about what is inappropriate, obscene or blasphemous. This is what it will take to develop our own sexual ethics and it’s probably a never-ending process as times change.

Jon, I sincerely thank you for answering Catholic Boy, so I don’t have to keep repeating myself every time.

It’s fascinating that Catholic Boy raises the issue of “what it’s got to do with Jesus” because Axel raised the same issue in reverse in a conversation with me. He showed a picture of a beautiful Christ with a perfect body at his recent workshop, and somebody asked, Where am I in that? What’s it got to do with me?

Trudie, you provided the answer: Jesus is the loving presence in ALL our activities and interactions with one another. Amen!

This is what is most interesting to me -- how ethics is determined from within a community context, not based on uninformed straight culture.
I remember awhile ago having a very important discussion of Robert Mapplethorpe with a gay male neighbor. It was 1989. Now I can think back and trace what I feel about all of this now.
And also, the ethical discussions within a lesbian context are so completely different than gay male ethical discussion, which of course have nothing to do with lesbian existence to begin with.
We need the history of the images to see where this leads.