“The Doubt of Thomas” (from “Circus Christi” series) by Fernando Bayona Gonzalez, 2009. fernandobayona.com
An exhibit of gay Jesus photos in Spain was closed recently after protests from Catholic groups.

“Circus Christi,” a series of gay Jesus photos by Fernando Bayona Gonzalez, sparked controversy and death threats when it was displayed at the University of Granada in Spain earlier this year. The university abruptly ended the exhibition early, citing concerns for the safety of exhibition viewers. The show opened on Feb. 11 and closed after less than a week, even though it was scheduled to run to March 5.

According to news reports, several Catholic groups and extremist organizations called for a ban on “Circus Christi,” and the artist received several death threats. “I knew it could have a significant impact, but I never imagined we would come to such extremes,” Gonzalez said in a press conference.

“Circus Christi” is a series of 14 large, elaborate photos depicting the life, death and resurrection of a contemporary gay (or bisexual) Jesus. The title is a play on the Latin phrase “corpus Christi,” meaning body of Christ. Its press kit describes the series as a “kitsch, ironic, poignant and subversive contemporary reversal of the Biblical story, a critical view of the New Testament, set in the 1970s and continuing to this day.”

In “Circus Christi,” Jesus is born in a hospital with medical assistance. He and his mother live in an urban world of strippers and prostitutes, leading to Jesus’ first sexual encounter -- with Mary Magdalene as his partner. He goes on to discover (and be betrayed by) homosexuality. His baptism by fire has homoerotic undertones and Jesus turns into a rock-n-roll Messiah. He and Judas enjoy a sensuous kiss in a tunnel where gay men cruise for sex. The next photo shows Jesus lying crucified on the streets, lit by the headlights of a car.

His resurrection occurs in the sterile, tomblike space of a modern hospital. In the final photo, a gay Jesus is reunited with his friends in an exceptionally beautiful version of doubting Thomas touching the wounds of the risen Christ.

Conservatives can find much more so-called “blasphemy” in “Circus Christi” than just the homosexuality of Jesus, but ultimately Gonzalez photos do convey the basic Christian story: Jesus overcame the world’s horrors and rose to live and love again.

Gonzalez lives and works in Granada, Spain and Milan, Italy. Born in 1980, he has a master’s degree in photography from NABA University in Milan. With permission from Gonzalez, some photos from “Circus Christi” are posted here. 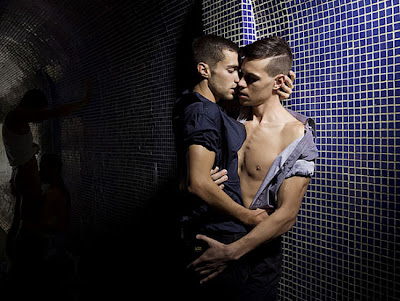 Posted by Kittredge Cherry at 2:11 PM