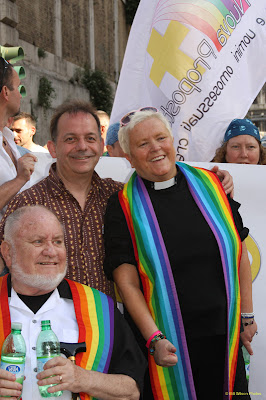 John McNeill, seated, in Rome for his film’s world premiere in June 2011 with director Brendan Fay and lesbian pastor Hilde Raastad
Tickets are selling fast for the U.S. premiere of “Taking a Chance on God,” a documentary on gay priest John McNeill. It will be shown at 3:15 p.m. Sept. 24 at the Woodstock Film Festival in New York.

The new film follows the extraordinary life of 85-year-old McNeill, a former POW, co-founder of the LGBT Catholic group Dignity and author of “The Church and the Homosexual.” He refused to be silenced even though he was expelled from the Jesuits.

McNeill will attend the premiere with director Brendan Fay and Charles Chiarelli, McNeill’s life partner of 45 years. Ticket info is available at woodstockfilmfestival.com. Watch for the movie at other film festivals this fall. They have received festival invitations from Poland, Germany and Italy, with interest from Spain and Romania too. A **new** trailer for the film is posted below.

UPDATE: John McNeill has posted his own personal thoughts on the film debut at this link:
Reflections on the playing of Taking a Chance on God at the Woodstock Film Festival


Taking a Chance on God from Brendan Fay on Vimeo.
Posted by Kittredge Cherry at 11:44 AM

Oh, how I wish I could go to New York. Thanks for posting this, Kitt!

I share your longing to go to Woodstock for the premiere, Trudie! If only I could get there, the ticket price is just $10.

As far as I know, Brendan is taking the film by invitation to film festivals now in hopes of getting a distributor who will take it nationwide. You might try asking a local film festival in Atlanta to show it.

I heard from Brendan today that he is busy doing interviews about Father Mychal Judge, the gay saint of 9/11. He co-produced "Saint of 9/11," the documentary about Father Mychal. Maybe you've seen that great movie? It's available on Netflix. I’m preparing a special post for the 10th anniversary of 9/11 too.

UPDATE: John McNeill has posted his own wonderful personal thoughts on the film debut at this link: