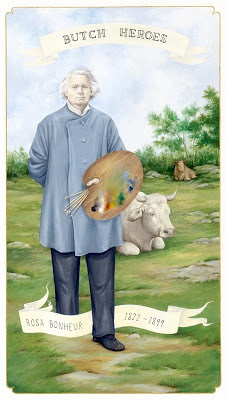 “Rosa Bonheur” by Ria Brodell
Rosa Bonheur, the most famous female painter of the 19th century, was a queer cross-dresser who honored what she called the “androgyne Christ.” She had two consecutive long-term relationships with women. She died on this date (May 25) in 1899.

For a new version of this article, click this link to Qspirit.net:
Rosa Bonheur: Cross-dressing painter honored “androgyne Christ”


Born in France in 1822, Bonheur received much acclaim in her lifetime for her paintings of animals. In recent decades she has been celebrated as a queer pioneer, feminist icon, and role model for the LGBT community. Her achievements grew out of an unusual religious upbringing in the proto-feminist Saint-Simonian sect, and the queer Christian ideals that she expressed in adulthood. Bonheur’s gender-bending lifestyle has been covered extensively by scholars, but her spirituality has received much less attention.

Her parents raised her in Saint-Simonianism, a French utopian Christian-socialist movement that advocated equality for women and prophesied the coming of a female messiah. Her father was an artist and an ardent apostle for the Saint-Simonian religion. Bonheur writes a whole chapter about growing up as a Saint-Simonian in the book “Rosa Bonheur: The Artist's (Auto)biography,” which she wrote with her companion Anna Klumpke.

The Saint-Simonian concept of gender equality paved the way for Bonheur’s father to train her as a painter -- and for her own defiance of gender norms. As she put it, “To his doctrines I owe my great and glorious ambition for the sex to which I proudly belong and whose independence I shall defend until my dying day.”

Cross-dressing was illegal in France at that time, but she got permission from the police to wear men’s trousers so she could sketch at such male-dominated places as horse fairs and slaughterhouses. She broke rules of feminine behavior by smoking cigars and wearing her hair short. She was never arrested for wearing men’s clothes, but she was arrested once in female attire when a policeman thought she was a man pretending to be a woman!

Bonheur had two female companions in her lifetime. She spent 50 years living with her childhood sweetheart Nathalie Micas, who died in 1889. Bonheur grieved deeply and then shared the last years of her life with a new companion, American artist Anna Klumpke.

One of their joint projects was writing Bonheur’s autobiography. In it she discusses her religious beliefs, stating, “I get blamed for not going to church! I may have more religion than the folks who, instead of doing their best to lead a blameless life, go mutter prayers there every day in a language they don’t understand…. I’ve written my own versions of the most important Catholic prayers.”

Here are some excerpts from prayers written by Bonheur and published in her autobiography:

Hail, O earth full of grace, the living God is with you. Blessed are you among all the planets, the fruit of your womb is our salvation. Holy earth, mother of love, pour out your grace on those who suffer, now and in our divine transformation.

I believe in God the all-powerful, everlasting Father, creator of all things eternal. I believe in his beloved Son, the saving Two, androgyne Christ, the highest point of human transformation, the sublime manifestation of the living God who is in everything that is.

Bonheur died at age 77, and Klumpke went on to champion Bonheur’s work until she died in 1942. They are buried together in a grave in Paris. Bonheur’s most famous paintings are “The Horse Fair” and “Plowing in the Nivernais,” but she leaves a large legacy of art depicting horses, cattle, sheep, lions, dogs, and many other creatures. A selection of her work is posted below.

The portrait at the top of this post is part of the “Butch Heroes” series by Ria Brodell, a culturally Catholic gender-queer artist in the Boston area. For more about Brodell, see my previous post “Artist paints history’s butch heroes: Ria Brodell interview.” 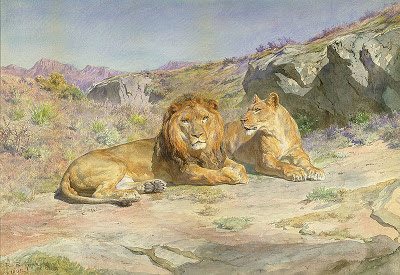 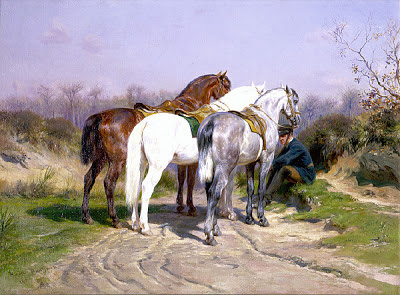 “Plowing in the Nivernais” by Rosa Bonheur (Wikimedia Commons) 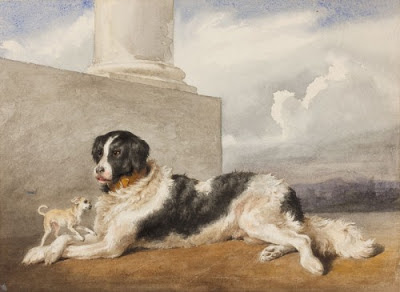 Rosa Bonheur at the Legacy Project

____
This post is part of the Artists series by Kittredge Cherry at the Jesus in Love Blog. The series profiles artists who use lesbian, gay, bisexual, transgender (LGBT) and queer spiritual and religious imagery. It also highlights great queer artists from history, with an emphasis on their spiritual lives.

Posted by Kittredge Cherry at 2:03 PM