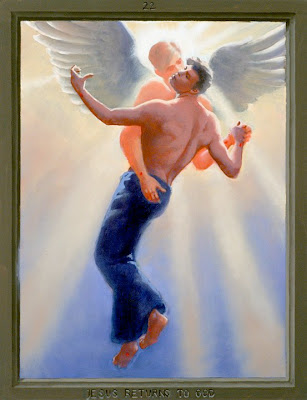 22. Jesus Returns to God (from The Passion of Christ: A Gay Vision) by Douglas Blanchard

A male couple seems to dance skyward in a vision of the Ascension from “The Passion of Christ: A Gay Vision” by Doug Blanchard, a series of 24 paintings by Douglas Blanchard. Churches celebrate the Feast of the Ascension today (May 9).

The loving couple seems to dance in a mystical homoerotic union. Jesus, shirtless and wearing blue jeans, swoons in the arms of a dance partner who appears to be a hunky angel. But they both have crucifixion wounds on their wrists. Jesus is embraced directly by God! The position of their arms suggests a ballroom dance, perhaps a waltz, with God’s hand planted firmly on Jesus’ buttocks.

Beams of white light stream from God’s head in a bright sunburst, almost obliterating the blue sky. His wings look muscular, as if God must work hard to lift the dead weight of Jesus up from the earth. The wounds in Jesus’ wrists and feet were dark before, but now they glow like hot-pink jewels. Dissolving into white at the top, this is the lightest painting in Blanchard’s Passion series, contrasting with the pitch-black panel of “Jesus Among the Dead.” Now the misty clouds even spill over the frame on the lower left. The Bible and creeds make it clear where the dancing couple is headed. Soon Jesus will sit at the right hand of God.

“Jesus Returns to God” provides a gay vision of the Ascension, the transitional moment when the resurrected Christ left earth. Details vary, but all Biblical accounts agree that Jesus was with his followers when he was lifted up to heaven. Churches commemorate the event with the Feast of the Ascension forty days after Easter. Christian tradition emphasizes that the resurrected Jesus ascended bodily up into the clouds of heaven. Mortal human flesh was made radiant by becoming part of God. Therefore it is appropriate for this image to have a physical, erotic component, even though many viewers find it disturbing.

People tend to react strongly to this image. Some find it too sexual and recoil at the thought of “God’s hand on my butt.” (At least God has no body below the waist here!) Others welcome the painting because it removes the shame of sexuality, presenting queer love as holy. Sacred same-sex kisses are rarer in art than gay bashings, so the most daring part of Blanchard’s Passion series occurs here after Jesus dies. Holy gay kisses also upset people more than gay bashings. With this image Blanchard’s series truly becomes a “gay vision” as the title proclaims. There is no longer any doubt about whether Jesus was simply an ally of queer people. The full revelation of his gay sexual orientation does not happen in his lifetime, but is disclosed in the afterlife by Blanchard. Some people wish the series stopped right before this image. Others would prefer it started here.

God appears here for the first time in Blanchard’s Passion series. The artist paints God with some extraordinary attributes: He has wings, wounds, and the same face as Jesus. It is unusual to see a painting of God with wings, even though there are several Biblical references to humanity being protected by or carried by God’s wings. Perhaps the wings here symbolize the presence of the Holy Spirit. Standard images show God and Jesus as father and son, but Blanchard makes them look like gay lovers or the same person in two places, further emphasizing his theme of God in solidarity with humanity. Usually only Jesus has crucifixion wounds, but here the all-powerful creator is also a wounded deity, injured by choosing mortality in order to show people the way to life.

The mystical marriage and “Christ the Bridegroom” are uncommon subjects in art history, but the Ascension has been painted many times over the centuries. Ascension images generally have two zones: a crowd of apostles watching from earth below and Christ rising up toward heaven above. Jesus is frequently shown with his right hand raised in a gesture of blessing. Sometimes just his feet are visible as he disappears into the clouds. Artists seldom depict only Jesus and God without the people below, as Blanchard does. A notable exception is the famed “Ascension” by 20th-century surrealist Salvador Dali, which is dominated by the soles of Jesus’ feet as he flies upward.

While it fits neatly into the Passion series, “Jesus Returns to God” can also stand alone as a gay-affirming vision of ecstatic union with God. The mixed response to the painting raises questions about how artists can visually code Jesus as queer without being too literal. Conservative Christians have made many LGBT people think of Jesus as their enemy. How far should an artist go to counteract that? For some viewers, anything more than a subtle hint is too sexually explicit or reduces the mystery of Christ to a billboard. Others need a boldly out-and-proud Jesus to prove that God loves LGBT folk. Blanchard strikes a balance by showing Jesus as an ordinary man swept up in a homoerotic dance with God.

“As the bridegroom rejoices over the bride, so shall your God rejoice over you.” -- Isaiah 62:5 (RSV)

Words and pictures cannot express all the bliss that Jesus felt when he returned to God. Some compare the joy of a soul’s union with the divine to sexual ecstasy in marriage. Perhaps for Jesus, it was a same-sex marriage. Jesus drank in the nectar of God’s breath and surrendered to the divine embrace. They mixed male and female in ineffable ways. Jesus became both Lover and Beloved as everything in him found in God its complement, its reflection, its twin. When they kissed, Jesus let holy love flow through him to bless all beings throughout timeless time. Love and faith touched; justice and peace kissed. The boundaries between Jesus and God disappeared and they became whole: one Heart, one Breath, One. We are all part of Christ’s body in a wedding that welcomes everyone.

Jesus, congratulations on your wedding day! Thank you for inviting me!

___
Bible background
Song of Songs: “O that you would kiss me with the kisses of your mouth!”

Scripture quotations are from Revised Standard Version of the Bible, copyright © 1946, 1952, and 1971 National Council of the Churches of Christ in the United States of America. Used by permission. All rights reserved.
Posted by Kittredge Cherry at 10:21 AM

what a POWERFUL photo

Love your writing about this picture. I must admit to being a little startled at the controversy around it. I've not discussed it with very many people, but I suppose I should have known.

“Jesus Returns to God” was one of my favorite pictures when I first saw the gay Passion series in 2005, and it remains a favorite. I had a great time writing about it too. Thanks, Gayte-Keeper and Counterlight, for your affirmations.