Day 1: Jesus with the prophets (Gay Passion of Christ series) 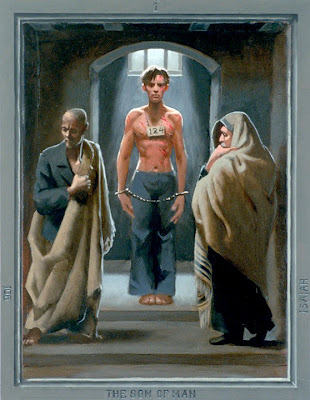 1. The Son of Man with Job and Isaiah (from The Passion of Christ: A Gay Vision) by Douglas Blanchard

“God has sent me to bind up the brokenhearted, to proclaim liberty to the captives, and the opening of the prison to those who are bound.” -- Isaiah 61:1 (Inclusive Language Lectionary)

A contemporary Jesus arrives as a prisoner in the painting that launches the series “The Passion of Christ: A Gay Vision” by Douglas Blanchard. Jesus stands half-naked in blue jeans and handcuffs, attractive even in adversity. Blanchard paints an accessible Jesus that 21st-century readers can know and touch in his Passion series. The 24 paintings portray Jesus as a gay man of today in a modern city, experiencing the events of Palm Sunday, the Last Supper, and his arrest, trial, crucifixion and resurrection. The beardless young Christ is unfamiliar to modern eyes, but Blanchard harkens back to the most ancient images of Jesus. The gay vision of Christ’s Passion promises to address the suffering of queer people today -- and thereby speak to the human condition. Christ the liberator comes as a prisoner. With this first painting, the stage is set and the viewer is invited to join Jesus on a journey that leads from prison to paradise.

God’s solidarity with people amid human suffering is emphasized from the first image in Blanchard’s Passion series. The pathway from bondage to freedom leads through the Passion, moving from death to new life. The word “passion” comes from the Latin word for suffering, and has become a theological term for the hardships that Jesus experienced in the week before his death.

Jesus shares his dark prison cell with a pair of older men in “The Son of Man (Human One) with Job and Isaiah.” His warm, pink flesh is bleeding. In a modern form of dehumanization, Jesus is labeled with a number, “124,” hanging on a tag around his neck. A barred window behind an arch gives him a crude halo. His queer identity is not apparent, as often happens with contemporary lesbian, gay, bisexual, and transgendered (LGBT) people. The title of this painting refers to Jesus as “Son of Man,” a mysterious, multi-purpose phrase that is translated as “Human One” in gender-inclusive language. Names painted on the sides of the frame identify his two companions as Job and Isaiah, prophets from the Hebrew scriptures. Their presence signals that themes of suffering and redemption will run through this series.

Blanchard, a gay artist based in New York, painted this scene at the dawn of the new millennium in summer 2001. His Lower East Side studio was only a couple of miles away from the World Trade Center. Little did he know that a few months later, on September 11, a terrorist attack there would make him confront suffering and death in a 21st-century Passion. Blanchard used the series to wrestle with his faith in the aftermath of 9/11.

The opening image is also one of the most cryptic paintings in the series. It may be tempting to skip over it and jump ahead to the next scene, where Jesus enters the city. Even the prophets turn their faces away. Job seems unable to bear seeing the bloody martyr in chains, while Isaiah appears to be lost in thought. Together the three men form a kind of Trinity. A close look reveals a surprise: The ancient prophets are wearing modern suits under their robes. The lapel of a business suit is visible beneath Job’s ancient garment, and the fringes of Isaiah’s robe dangle over modern shoes. They present a message for today clothed in an archetypal story from long ago. Jesus faces the viewer with a full frontal gaze, ready to engage in dialogue. But he doesn’t say a word. He carries nothing, no stone tablets -- not even a tablet computer. Jesus himself is the message. Just by being here, he proclaims freedom.

Both Job and Isaiah are associated with suffering. Job was a righteous man who kept his faith despite horrible calamities. Throughout the whole Book of Job he wrestles with the question: Why do bad things happen to good people? A major theme in the Book of Isaiah is God’s Suffering Servant or “Man of Sorrows” who brings justice, but is abused and rejected.

Jesus chose to quote Isaiah when he launched his public ministry. He told the people at the synagogue in Nazareth that he was fulfilling this prophecy: “The Spirit of God is upon me, because God has anointed me to preach good news to the poor, and has sent me to proclaim release to the captives and recovering of sight to the blind, to set at liberty those who are oppressed.” (Luke 4:18; Isaiah 61:1) Isaiah also is known for his prophecy about a savior named Immanuel, which is Hebrew for “God with Us.” Christians believe these prophecies pointed to Jesus, the compassionate follower of God who was crucified. The New Testament describes how Christ emptied himself and took human form, living among us as the Word made flesh.

Jesus, Job, and Isaiah all used the phrase translated as “Son of Man” or “Human One.” It can mean a generic human being (male or female) or a divine ruler envisioned by the prophet Daniel. Jesus often referred to himself as “son of man,” thereby emphasizing his own humanity and perhaps also invoking ancient prophecies of a messiah. By using “Son of Man” in the title, Blanchard underscores the humanity of Jesus while honoring his divinity. Blanchard’s choice of words reveals that this vision is progressive but not necessarily politically correct. His Jesus remains unapologetically male.

The scene of Jesus in jail with Job and Isaiah does not occur in scripture, leaving room for the viewer to speculate. Is Jesus arriving in prison or leaving? Maybe the painting represents Jesus’ own vision while he prayed in prison before he was sentenced to death. He may have remembered the ancient prophets as the crowds outside shouted for his death -- just a week after they roared their approval when he entered the city. Or does it show how society locks away today’s prophets along with those of the past?

The prison scene is an enigmatic prelude for the “gay vision” proclaimed in the subtitle of the series. Americans have been imprisoned for homosexual acts within living memory. The last sodomy laws in the United States were not overturned until 2003. Consensual homosexual acts remain a crime in many countries and a few still impose the death penalty. Many queers still imprison themselves in self-imposed mental closets.

Early Christian artists commonly pictured Jesus as a youthful Good Shepherd without a beard. The bearded Christ motif developed around the sixth century. The crucifixion images that dominate current Christian thought didn’t arise until a thousand years after he died. A Jesus in modern dress may come as a surprise, but he promised his disciples, “Lo, I am with you always.” [Matthew 28:20 RSV]

Artists almost never portray Jesus in prison. A rare exception is 19th-century French painter James Tissot. He painted Jesus with hands lifted in prayer, chained to a stone between two sleeping guards in “Good Friday Morning: Jesus in Prison.” Likewise Belgian surrealist Rene Magritte is one of the few artists in history who ever attempted to give visual form to the phrase “Son of Man.” His famous “Son of Man” is a self portrait of the artist in a suit with an oversized apple covering his face.

The gay Passion series operates on two levels as a story within a story. The first and last paintings function like bookends, putting the gospel narrative into a larger context not limited by time and space. For those who take time to decode the rich symbolism of this painting, it foreshadows and sums up the whole series. This will be no ordinary Stations of the Cross, with a hopelessly distant Jesus moving predictably from trial to tomb. Blanchard’s vision is broader. With this first painting, Blanchard honors human suffering by invoking major Biblical models of Christ: the Son of Man / Human One, the Suffering Servant, and Immanuel. As the averted eyes of Job and Isaiah indicate, many prophets desired to see the freedom embodied by Christ, but did not. Viewers are blessed with the chance to see it played out as the gay vision of the Passion unfolds.

Jesus was one of us, a real human being. He loved everybody, including his enemies. And yet some say that LGBT people don’t belong in the story of Jesus Christ. There’s black Jesus, Asian Jesus -- and now gay Jesus to heal the hate and discrimination done in Christ’s name. This is the story of a Jesus who emphasized his humanity by calling himself the Human One.* He doesn’t look very gay. Young and attractive, he can pass for straight. He is fully in the present, yet feels kinship with the ancient prophets Job and Isaiah who understood suffering. He wanted to serve God by healing people and setting them free. Here we remember his last days, his death and his resurrection. Jesus was a child of God who embodied love so completely that he transcended death. But while it was all happening, people didn’t understand. Society rejected him. They locked the liberator in prison.

Jesus, show me how you lived and loved.

*Son of Man can be translated as Human One.

The book version of “The Passion of Christ: A Gay Vision” was published in fall 2014 by Apocryphile Press.

Holy Week offering: Give now to support LGBT spirituality and art at the Jesus in Love Blog

Posted by Kittredge Cherry at 9:13 AM