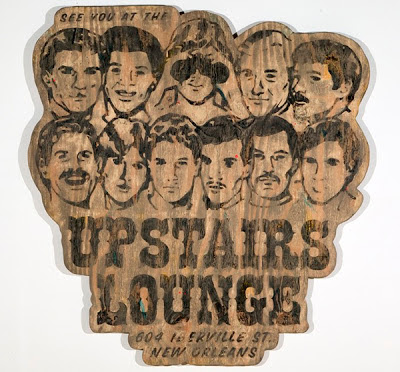 “See You at the UpStairs Lounge” by Skylar Fein
The deadliest attack on LGBT people in U.S. history is being remembered in powerful new ways on its 41st anniversary, including a new film, book and online exhibit. An arson fire killed 32 people at the UpStairs Lounge, a gay bar in New Orleans, 41 years ago today on June 24, 1973.

For a new version of this article, click this link to Qspirit.net:
UpStairs Lounge fire: 32 killed in deadly attack on LGBTQ people


Few people cared about the UpStairs Lounge fire at the time. The crime was never solved, churches refused to do funerals for the dead, and four bodies went unclaimed. Now there is a resurgence of interest.

The newest materials, all made available within the last 12 months, are the trailer for documentary “Upstairs Inferno” from filmmaker Robert Camina; the book “The Up Stairs Lounge Arson: Thirty-two Dead in a New Orleans Gay Bar, June 24, 1973” by Clayton Delery-Edwards; and an award-winning online exhibit at the LGBT Religious Archives Network.

“Upstairs Inferno” will be the first to interview several survivors who have kept silent for decades. The documentary is being produced and directed by Camina, whose previous film was the widely praised “Raid of the Rainbow Lounge” about a police raid at a Texas gay bar. Now he aims to create the most comprehensive and authoritative film on America's biggest gay mass murder. A trailer has been released while a fundraising campaign is underway for funds to complete the film. The anticipated release date is fall 2014.

LGBT Religious Archives created an online exhibit about the UpStairs Lounge Fire with more than 120 artifacts that weave together stories about the fire and its aftermath, early gay activism, and the beginnings of Metropolitan Community Church in New Orleans. Original artifacts include newspaper and journal articles, photographs, correspondence, government reports and recordings from the time. The exhibit went online in September 2013 and received the 2014 Allan Bérubé Prize for “outstanding work in public or community-based LGBT and/or queer history.”

Other recent works about the fire include he musical drama “Upstairs” by Louisiana playwright Wayne Self It is playing in New York this month after opening in New Orleans and Los Angeles in June 2013. Also in 2013 the New Orleans Museum of Art acquired Louisiana artist Skylar Fein’s major installation “Remember the UpStairs Lounge.” The tragedy is also recounted in a documentary by award-winning film maker Royd Anderson released on June 24, 2013, and in the 2011 book “Let the Faggots Burn: The UpStairs Lounge Fire” by Johnny Townsend.

For queer people, the UpStairs Lounge served as a sanctuary in every sense of the world. It was a seemingly safe place where LGBT people met behind boarded-up windows that hid them from a hostile world. Worship services were held there by the LGBT-affirming Metropolitan Community Church of New Orleans. The pastor, Rev. William R. Larson, died along with a third of congregation. Half the victims were MCC members. Those who died included people from all walks of life: preachers, hustlers, soldiers, musicians, parents, professionals and a mother with her two sons.

The horror of the fire was compounded by the homophobic reactions. Churches refused to hold funerals for the victims. Finally MCC founder Rev. Troy Perry flew to New Orleans to conduct a group memorial service. Families of four victims were apparently so ashamed of their gay relatives that they would not identify or claim their remains. The City refused to release their bodies to MCC for burial, and instead laid them to rest in a mass grave at a potter’s field.

The crime received little attention from police, elected officials and news media.  The only national TV news coverage at the time was these video clips from CBS and NBC:

Louisiana playwright and composer Wayne Self spent five years weaving together the stories of the UpStairs Lounge fire victims and survivors. The result is a dramatic musical. He says his work takes the form “of tribute, of memorial, even of hagiography.”

The musical "Upstairs" brings back to life people such as MCC assistant pastor George “Mitch” Mitchell, who managed to escape the fire, but ran back into the burning building to save his boyfriend, Louis Broussard. Both men died in the fire. Their bodies were found clinging to one another in the ashes. In the musical, Mitchell sings a song called “I’ll Always Return”:


…Modern age,
Life to wage.
To get ahead, must turn the page.
I can't promise I'll never leave,
But I'll always,
I'll always return….


“I’ll Always Return” is one of five songs from the musical that are available online as workshop selection at http://upstairsmusical.bandcamp.com/.

Self raised funds so that Mitchell’s son and the son’s wife and could travel from Alabama to attend the play. Many victims of the UpStairs Lounge fire were survived by children who are still alive today.

The musical also explores the unsettled and unsettling question of who set the fire. Rodger Dale Nunez, a hustler and UpStairs Lounge customer, was arrested for the crime, but escaped and was never sentenced. He was thrown out of the UpStairs Lounge shortly before the fire for starting a fight with a fellow hustler. He committed suicide a year later. Self says that other theories arose to blame the KKK and the police, but he implicates Nunez -- with room for doubt -- in the musical.

A gay man may have lit the fire, but the real culprit is still society’s homophobia that set the fuse inside him. Homophobia was also responsible for the high death toll in another way. The fire was especially deadly because the windows were covered with iron bars and boards so nobody could see who was inside. But they also prevented many people from getting outside in an emergency.

The UpStairs Lounge is recreated with haunting detail in Skylar Fein’s 90-piece art installation. He builds an environment with artifacts, photos, video, and a reproduction of the bar’s swinging-door entrance, evoking memories of how the place looked before and after the fire. “Remember the UpStairs Lounge” debuted in New Orleans in 2008 and was shown in New York in 2010. In January 2013 the New Orleans Museum of Art announced that it had acquired the installation. Fein donated it to the museum, saying that he did not want to dismantle the work or profit from its sale. He discusses the fire and shows objects from his installation in this video.

The victims of the UpStairs Lounge fire are part of LGBT history now, along with the queer martyrs who were burned at the stake for sodomy in medieval times. Their history is told in my previous post Ash Wednesday: Queer martyrs rise from the ashes.

The UpStairs Lounge fire gives new meaning to the Upper Room where Jesus and his disciples shared a Last Supper. It was also the place where they hid after his crucifixion, but the locked doors did not prevent the risen Christ from joining them and empowering them with the Holy Spirit.

The shared journey of LGBT people includes much loss -- from hate crimes, suicide, AIDS, and government persecution. But the LGBT community has also found ways to keep going. Reginald, one of the survivors of the UpStairs Lounge fire, expresses this strength in the song "Carry On" from the "Upstairs" musical:


I can speak.
I can teach.
I can give of the compassion I've received.
I can build.
I can sing!
I can honor all the loves,
That have passed away from me,
By sharing all the good that they have ever shown to me.
I can live my life.
I can carry on.
Carry on.
Carry on!

New Orleans film maker Royd Anderson's “The UpStairs Lounge Fire” documentary lasts 27 minutes (longer than the fire itself) and includes interviews with an eyewitness, a son who lost his father, a rookie firefighter called to the scene, author Johnny Townsend, and artist Skylar Fein, whose art exhibit about the tragedy gained national prominence. Here is a video trailer for the documentary.

The value of remembering the UpStairs Lounge fire was summed up by Lynn Jordan in the LGBT Religious Archives online exhibit that he co-curated. Jordan, founding member of MCC San Francisco, visited New Orleans shortly before and after the fire. In his introduction to the UpStairs exhibit, he explains:


“I left New Orleans with the promise to each of the 32 who would become immortal, that I would remember their sacrifice and carry them with me in all that would unfold in my life. The research and documentation that is an integral part of this Upstairs exhibit is “my” living into completion the promise to these “32 martyrs of the flames” that they “would not” be forgotten.

For those who would say that this event was so yesterday, i.e., we have achieved so many advances in our civil rights and in our acceptance for this to happen again, I would remind them that hate and intolerance are not constrained to finding shelter in any one moment, any one location in our “queer” history. To focus only on how far our LGBTQI communities may have progressed in 40 years; to fail to remember the sacrifice of all the lives lost or shattered in this journey; to lapse into complacency about our personal security: places us at risk of reviving the tragedy of our past in the present.”

The Tragedy of the UpStairs Lounge (Jimani.com - website of the bar now at the same location)

32 Died, and I Wrote a Musical About It: Why I Did It and Would Do It Again by Wayne Self (HuffingtonPost)

Posted by Kittredge Cherry at 10:32 AM