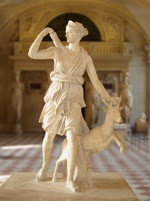 Mary, left, took over the Aug. 15 holiday from the goddess Diana, right
A mid-August holiday was once the festival of the lesbian goddess Diana (Artemis), but it has been adapted into a feast day for the Virgin Mary.

For a new version of this article, click this link to Qspirit.net:
Mary, Diana and Artemis: Feast of Assumption has lesbian goddess roots


Midsummer feasts have celebrated the divine feminine on Aug. 15 since before the time of Christ. Now devoted to Mary, the holiday known as the Feast of the Assumption (or Dormition) carries the torch of lesbian spiritual power to a new generation on the same date.

Saint Mary, mother of Jesus, is honored by churches on Aug. 15 in a major feast day marking her death and entrance into heaven. Catholic and Orthodox churches call it the Feast of the Assumption or Dormition because they believe that Mary was “assumed” into heaven, body and soul.

The connections between Diana and Mary raise many questions. The concept of virginity has been used to control women, but sometimes it is a code word for lesbian. What shade of meaning is implied by the “virginity” of these two heavenly queens? Did the church patriarchs substitute wild lesbian Artemis with mild straight Mary -- or is Mary more versatile and dynamic than many thought?

The Virgin Mary’s holiday was adapted -- some would say appropriated -- from an ancient Roman festival for Diana, the virgin goddess of the moon and the hunt. Diana, or Artemis in Greek, is sometimes called a lesbian goddess because of her love for woman and her vow never to marry a man. The ancient Roman Festival of Torches (Nemoralia) was held from Aug. 13-15 as Diana’s chief festival.

According to mythology, Diana preferred the company of women and surrounded herself with female companions. They took an oath of virginity and lived as a group in the woods, where they hunted and danced together. Homoerotic art and speculations often focus on Diana’s relationship with the princess Callisto. The god Jupiter (Zeus) lusted after Callisto, so he disguised himself as Diana and seduced Callisto in a woman-to-woman embrace. The lesbian love scene is painted by artists such as Francois Boucher in “Jupiter and Callisto” (below).

There are many more stories about Diana and the women, nymphs and goddesses whom she loved. The goddess Britomaris was another favorite of Diana. When the lustful king Minos pursued Britomaris, she escaped by leaping into the sea. Diana rescued her and, some say, fell in love with her. Diana also showed love for various princesses.  She gave the princess Cyrene a pair of magical dogs and granted the princess Daphne the gift of shooting straight. The princess Atalanta almost died of exposure as a baby girl after her father abandoned her because he wanted a son. Diana saved her and, with the help of a she-bear, Atalanta grew up to become one of Diana’s beloved companions. And this is just the beginning.

Diana’s main holiday was the Festival of Torches or Nemoralia. Hundreds of women and girls carried torches and candles in a night-time procession through the woods. They wore wreaths of flowers -- and even put flowers on the hunting dogs who walked with them. The group hiked a few miles from Rome to a sacred site, the circle-shaped Lake Nemi. The dark waters reflected the moon and the torchlight of the pilgrims. There they left offerings of apples, garlic, statues and prayers handwritten on ribbons. Click here for a vivid description of the festival. Ovid, a Roman poet who lived before Christ, described the magic of the festival:

Often does a woman whose prayers Diana answered,
With a wreath of flowers crowning her head,
Walk from Rome carrying a burning torch...

Click here for a beautiful painting of “Diana Asleep in the Woods” by surrealist Giorgio de Chirico. Diana sleeps beside an offering of fruit, her bow and arrow, and her large black-and-white spotted dog.

Aspects of Diana and Artemis were taken over by the church more than 1,300 years ago. The Festival of Torches became the Feast of the Assumption. The Temple of Artemis at Ephesus in Turkey was one of the seven wonders of the ancient world, with an awe-inspiring statue of the “many-breasted” Artemis. The temple was destroyed and replaced by the Church of Mary. The Virgin Mary even assumed some titles once given to Artemis, including Queen of Heaven.

Books such as Alone of All Her Sex: The Myth and the Cult of the Virgin Mary

by cultural historian Marina Warner show how the figure of Mary was shaped by goddess legends and other historical circumstances, resulting in an inferior status for women. In the novel “Mary and the Goddess of Ephesus: The Continued Life of the Mother of Jesus,” former seminarian Melanie Bacon explores the little-known tradition that after Jesus died, his mother spent most of her adult life in a community dedicated to worshiping Artemis.

Feminists praise Diana/Artemis as an archetype of female power, a triple goddess who represents all phases of womanhood. She is the maiden, wild and free, with no need for a man. She is the “many-breasted” mother who nurtures all life. She is the crone, the mature hunter who provides swift death with her arrows in harmony with the cycles of nature.

LGBTQ people and allies may be inspired by the queer origins of this midsummer holiday. May the Queen of Heaven, by whatever name, continue to bless those who remember her.
___
Related links:
Are there any lesbian goddesseses?


___
Related books:
“Mother of God Similar to Fire” with icons by William Hart McNichols and reflections by Mirabai Starr presents a wide of variety of liberating icons of Mary, including a black Madonna. McNichols is a New Mexico artist and Catholic priest who has been rebuked by church leaders for making icons of LGBTQ-affirming martyrs and saints not approved by the church.

“Artemis of Ephesus,” 1st century CE Roman copy of the “many breasted” Artemis stattue of the Temple of Ephesus (Wikimedia Commons)
___

Icons of the Assumption of Mary and many others are available on cards, plaques, T-shirts, mugs, candles, mugs, and more at TrinityStores.com


Posted by Kittredge Cherry at 7:55 AM