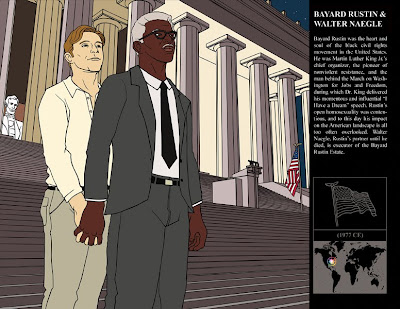 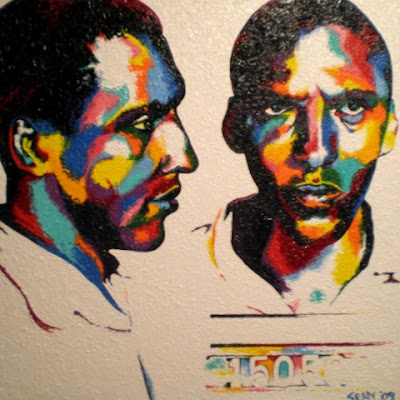 “Bayard Rustin - Pride” by Sean J. Randall
Bayard Rustin was a black gay man and chief organizer of the influential 1963 Civil Rights March on Washington -- which marks its anniversary next week on Aug. 28. A follower of the Quaker faith with its pacifist tradition, he brought Gandhi-style non-violent protest techniques to the movement for racial equality and become a close advisor to Martin Luther King. He died 27 years ago today (Aug. 24, 1987) at age 75. 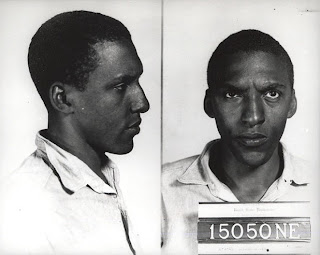 Walter Naegle was Rustin’s life partner from 1977 until his death a decade later. As executor and archivist for the Bayard Rustin estate, Naegle continues to promote Rustin’s legacy by organizing programs and providing materials for books and exhibits on Rustin’s amazing life. Rustin’s biography is told in the film Brother Outsider: The Life of Bayard Rustin

In the image at the top of this post, Rustin and Naegle hold hands as an interracial gay couple on the steps of the Lincoln Memorial. It was created by artist Ryan Grant Long for his “Fairy Tales” series of gay historical figures. For more on Long, see my previous post Artist paints history’s gay couples: Interview with Ryan Grant Long. The second image was created by Portland artist Sean J. Randall. He adds rainbow colors to Rustin’s mug shot to emphasize his gay pride. Thanks to both artists for permission to share their work at the Jesus in Love Blog.
___
Related links:
Bayard Rustin at Qualia Encyclopedia of Gay Folklife

Bayard Rustin: One of the Tallest Trees in Our Forest by Irene Monroe (Huffington Post)
____
This post is part of the GLBT Saints series by Kittredge Cherry at the Jesus in Love Blog. Saints, martyrs, mystics, prophets, witnesses, heroes, holy people, deities and religious figures of special interest to lesbian, gay, bisexual and transgender (LGBT) and queer people and our allies are covered on appropriate dates throughout the year.

Posted by Kittredge Cherry at 8:40 AM

Sainthood is a devilishly (if you will) nuanced accusation, especially in regard to a Quaker. (Paradoxically enough, there is a book called Quaker Saints, but perhaps the exception proves the rule.) I am quite confident that Friend Bayard would quickly, modestly, and conclusively object to being called a saint, for innumerable reasons, but ultimately because at the heart of the Quaker way, we strongly dissent from Christianity's longstanding sacred-profane dichotomy. Walt Whitman, our greatest exponent, swore, "The scent of these arm-pits aroma finer than prayer . . . And a mouse is miracle enough to stagger sextillions of infidels." On the other hand, despite the accusation of sainthood in the essay title, the post itself is a perfectly serviceable piece of biography that does not make any extravagant claims. I suspect that generally, in practice, your use of "saint" is actually just a signifier of the great respect and reverence we owe the great humanitarians among our tribe. And you know what? That's OK!!

I LOVE your comment! The Walt Whitman quotes are precious! You are right that I use the word “saint” loosely to signify “the great respect and reverence we owe the great humanitarians among our tribe.” Like the Quakers, I want to dissolve the boundary between sacred and profane. Part of my approach is to expand the meaning of sainthood, democratizing it so that “sainthood” encompasses many more people than have been officially consecrated by the church hierarchy. In the New Testament, Paul used the word “saint” to refer to every member of the Christian community, a practice continued by MCC founder Troy Perry. One of my memories from working with him was that whenever he wrote a letter to MCC members, he addressed it as "Dear Saints." We always got back some responses from people protesting, "I'm not a saint!" But to Troy, we are all saints.