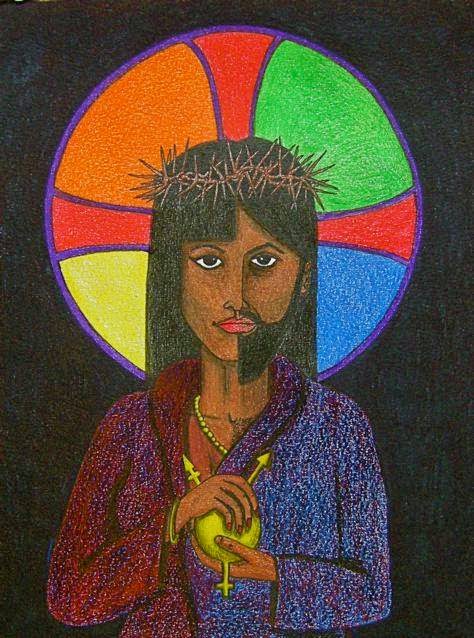 “Neither” by David Hayward
A rare icon of a queer black Jesus is presented here for Kwanzaa, a weeklong celebration of African American culture starting Dec. 26. Many families and congregations have adopted Kwanzaa into their spiritual life.

It’s almost impossible to find a Christ figure that expresses both LGBTQ identity AND non-white racial / ethnic identity. “Neither” by David Hayward is one of these uncommon treasures.

“Neither” shows a dark-skinned Jesus who is male on one side and female on the other in the style of the Hindu deity Ardhanarishvara. He/she has a rainbow halo and holds a transgender symbol.

People celebrate Kwanzaa by giving gifts, lighting a set of seven candles in the African colors of red, green, and black, and sharing an African feast on New Year’s Eve. Each of the seven days honors a principle from African heritage: unity (umoja), self-determination (kujichagulia), collective responsibility (ujima), cooperative economics (ujamaa), purpose (nia), creativity (kuumba), and faith (imani). Kwanzaa was created in 1965-66 by Maulana Karenga, chairman of black studies at California State University, in Long Beach based on harvest festivals in Africa.

“Neither” was painted by Canadian artist David Hayward, also known as Naked Pastor. He has a master's degree in theology and 30 years of pastoral experience. His books include “The Art of Coming Out: Cartoons for the LGBTQ Community” and “Questions are the Answer.” Prints of “Neither” are available from Naked Pastor’s online shop.

Black theologian James Cone advocated powerfully for the black Jesus. In his classic 1970 book “A Black Theology of Liberation,” he wrote:


The blackness of God means that God has made the oppressed condition God's own condition. This is the essence of the Biblical revelation. By electing Israelite slaves as the people of God and by becoming the Oppressed One in Jesus Christ, the human race is made to understand that God is known where human beings experience humiliation and suffering.”

It may be useful to ask: How does this relate to the queerness of God? Cone objected to consistent portrayals of Jesus as white, just as queer theologians question the pervasive heterosexual assumptions about Jesus.

Cone discussed the value the black Jesus in a 1989 interview with USA Today, using arguments similar to what queer theologians say about the queer Christ:


It’s very important because you’ve got a lot of white images of Christ. In reality, Christ was not white, not European. That’s important to the psychic and to the spiritual consciousness of black people who live in a ghetto and in a white society in which their lord and savior looks just like people who victimize them. God is whatever color God needs to be in order to let people know they’re not nobodies, they’re somebodies.

Cone himself sees the connections. In a 2015 interview, he told Huffington Post, “God is red. God is brown. God is yellow. God is gay…I don’t use blackness as a way to exclude anyone.”


Happy Kwanzaa from Kittredge Cherry and Jesus in Love!


2016
"Blackpentecostal Breath: The Aesthetics of Possibility” by Ashon T. Crawley.

“LGBT: In The Name of God: The Black Church's Response to the LGBT Community” by Christopher James Priest with a foreword by Benjamin L. Reynolds.

“In the Life and in the Spirit: Homoerotic Spirituality in African American Literature” by Marlon Rachquel Moore.

Beautifully done. It took me a while to recognize the beard on the left side of the figure's face, since at first viewing it comes across as strongly feminine. Thank you for this.