Poem: "Faggots We May Be" 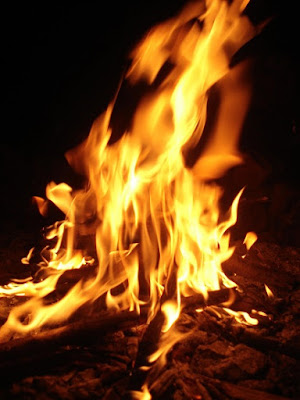 A new poem weaves together LGBT spiritual themes, making connections between gay men burned to death, global warming and the Rainbow Christ. Georgia poet S. Alan Fann evokes Stonewall-style empowerment in the face of the UpStairs Lounge Fire and the thousands who were executed for homosexuality throughout history.

- though burned by society’s condemnation, homophobia and persecution,

- together we rise to reclaim the livelihood of purposeful living with the planetary elemental solution.

Where sacred mutual respect abounds, where the Lupus Dei, Corporis Leo Deus and gravity laden Earth walkers surround the living while remembering and honoring all who have come before us, and all beginning to begin the journey and chances at choosing, yet again.

“Today is the first day of the rest of your life.”

With that knowledge, we - empowered, look forward without the shackles of the past holding us back. Co-creating space for regeneration, transformation and liberating fulfillment with sustainable communication.

We faggots advocate - nay demand, a reversal of the global warming trend.

We transform fear of being burned as faggots by refusing to be consumed with convention,
by leading and enjoining ourselves and others into harmonious, sustainable living,
by educating ourselves and others as to our impact, dependency and interrelatedness to our Mother Earth and Rainbow Christ on this glorious, eternal reincarnation journey.

___
Georgia poet S. Alan Fann identifies as a mystic and has master’s degrees in clinical psychology and project management. Part of his journey is described at http://gentlefeminist.tumblr.com. Fann has a deep, abiding commitment to his same-sex life partner of over 11 years. He occasionally writes poems and meditations on http://alanfann.tumblr.com and shares LGBTQ items of interest, including some political opinion pieces also on Twitter and Facebook @salanfann. 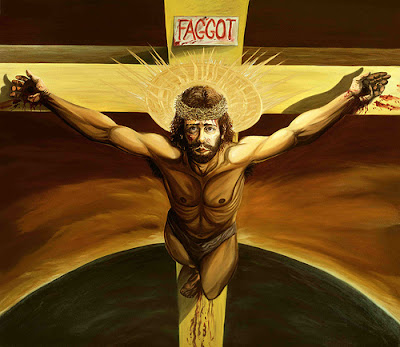 “I chose the word FAGGOT because today, gays are socially-acceptable and religiously-justifiable targets for hate. And, just like gays, Jesus was made a hate target in his time because he dared to be different, to tell his understanding of the truth even though his words and his position defied the religious establishment. We all are created by God to be who we are, including gays and lesbians.”

A chapter about Harrelson is included in “Art That Dares: Gay Jesus, Woman Christ, and More” by Kittredge Cherry.

Well, the poem is strong statement, powerful rhetoric but if anyone wants gay dilemmas addressed in more strictly poetic form then try
"A Saint's Mistake: A Poem of St Paul" at http://goo.gl/gBL4oA
which tackles a number of theological and social issues
while for a more satirical treatment of the gay and religious situation, try "Songs of Puritania on a Gay Theme" at
http://bit.ly/16ybdts

Thanks, Rollan! I enjoyed reading your intricate poems on important themes, grounded in your trademark scholarly Biblical research and understanding of astrology. I do feel that I’m living in “Puritania” sometimes!