For a new version of this article, click this link to Qspirit.net:
Ash Wednesday: Queer martyrs executed for homosexuality rise from the ashes

Today on Ash Wednesday queer martyrs rise from the ashes as we recall the thousands who were executed for homosexuality throughout history.

Christians traditionally put ashes on their foreheads as a sign of repentance on Ash Wednesday. It is an appropriate time to reflect on the sins of the church and state against queer people, including the burning of “sodomites” and thousands of executions for homosexuality over the past 800 years.

Some of the executions for sodomy were recorded by artists, either long ago or in recent times. This post features images, both new and historical, to remember and honor those whose lives were desecrated and cut short.

The whole sad history of church- or state-sanctioned executions of queer people stretches from the 13th century almost to the present. For the first 1,000 years of church history, Christianity was relatively tolerant of homoerotic relationships.

In 1120, the Church Council of Nablus specified burning at the stake for homosexual acts. Although this penalty may not immediately have been applied, other harsh condemnations followed rapidly. In 1212, the death penalty for sodomy was specified in in France. Before long the execution of supposed “sodomites”, often by burning at the stake, but also by other harsh means, had become regular practice in many areas.

The church contributed to the deaths of thousands for homosexuality over the next 700 years. Witch burning occurred in the same period and claimed the lives of countless lesbian women whose non-conformity was condemned as witchcraft. (Current events in Uganda and elsewhere prove that some are STILL using Christianity to justify the death penalty for homosexuality up to the present day.) As Weldon concludes:

Obviously, the Catholic Church cannot be held directly responsible for the judicial sentences handed down by secular authorities in Protestant countries. It can, however, be held responsible for its part in fanning the flames of bigotry and hatred in the early part of the persecution, using the cloak of religion to provide cover for what was in reality based not on Scripture or the teaching of the early Church, but on simple intolerance and greed.

Sodomy is often considered a male issue, but the facts of history make clear that queer women were persecuted under sodomy laws too. The meaning of sodomy has changed a lot over the centuries. The “sin of Sodom” in the Bible was described as arrogance and failure to care for travelers and the poor. 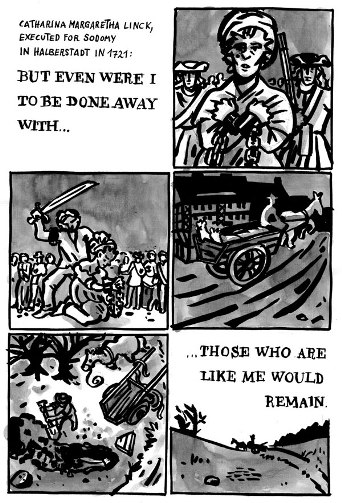 “Catharina Margaretha Linck, executed for sodomy in Halberstadt in 1721” by Elke R. Steiner. Steiner’s work is based on Angela Steidele’s book "In Männerkleidern. Das verwegene Leben der Catharina Margaretha Linck alias Anastasius Lagrantinus Rosenstengel, hingerichtet 1721." Biographie und Dokumentation. Cologne: Böhlau, 2004. ("In Men's Clothes: The Daring Life of Catharina Margaretha Linck alias Anastasius Rosenstengel, Executed 1721.")
German artist Elke R. Steiner illustrates the last known execution for lesbianism in Europe. Born in 1694, Catharina Margaretha Linck lived most of her life as a man under the name Anastasius. She was beheaded for sodomy on Nov. 8, 1721 in Halberstadt in present-day Germany. Linck worked at various times as a soldier, textile worker and a wandering prophet with the Pietists. She married a woman in 1717. Her mother-in-law reported her to authorities, who convicted her of sodomy with a "lifeless instrument," wearing men's clothes and multiple baptisms. The subject is grim, but Steiner adds an empowering statement: “But even were I to be done away with, those who are like me would remain.” 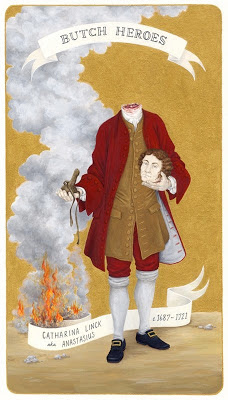 “Catharina aka Anastasius Linck” by Ria Brodell
Genderqueer Boston artist Ria Brodell portrays Linck and several other historical women who were killed for sodomy in her “Butch Heroes” series. They include Katherina Hetzeldorfer of Germany, drowned in 1477 for female sodomy, and Lisbetha Olsdotter aka Mats Ersson of Sweden, who was decapitated in 1679 for cross-dressing and other crimes. 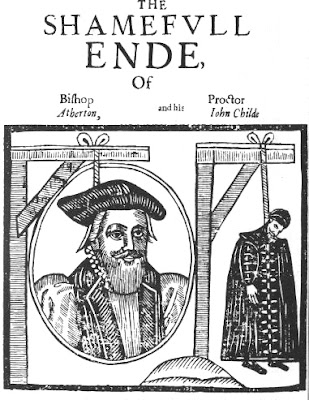 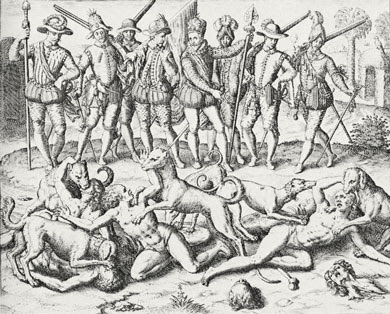 Balboa executing two-spirit Native Americans for homosexuality in 1513 in Panama -- engraving by Théodore De Bry, 1594 (Wikimedia Commons).
The Spanish explorer Vasco Núñez de Balboa found homosexual activity among the Native American chiefs at Quarqua in Panama. He ordered 40 of these two-spirited people thrown to his war dogs to be torn apart and eaten alive to stop the “stinking abomination.” Executions for homosexuality continued during the “Mexican Inquisition,” an extension of the Spanish Inquisition into the New World. In one of the most notorious examples, 14 men were executed by public burning on Nov. 6, 1658 in Mexico City. 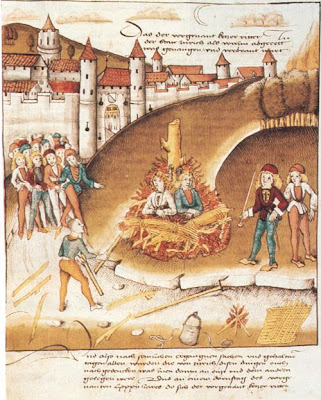 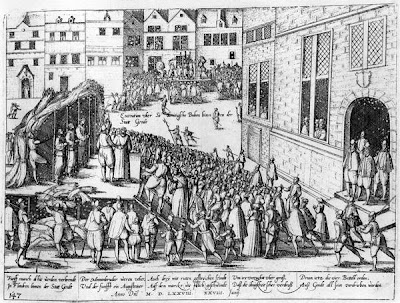 Execution of sodomites in Ghent in 1578 -- drawing by Franz Hogenberg (Wikimedia Commons)
Five Catholic monks were burned to death for homosexuality on June 28, 1578, in Ghent, Belguim. 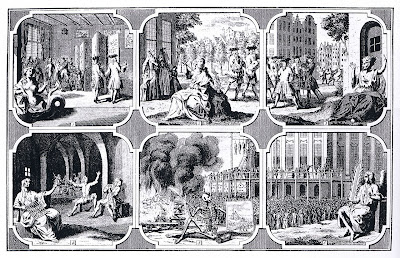 "Timely Punishment..." shows Dutch massacre of sodomites in Amsterdam in 1730-31 (Wikimedia Commons)
A total of 96 gay men were executed for sodomy in the Netherlands years 1730-31.

More recent examples include the Holocaust or "homocaust" of persecution by the Nazis, who sent an estimated 5,000 to 60,000 to concentration camps for homosexuality. Executions on homosexuality charges in Iran continued to make news multiple times since 2011.

Many more die in attacks fueled by religion-based hate, including those killed in the arson fire at the UpStairs Lounge, a gay bar in New Orleans.

Milder forms of anti-LGBT persecution continue in the church. Now it is common to freeze LGBT people out of church leadership positions. Gay pastor and author Chris Glaser writes about the exclusion from clergy roles as a “fast imposed by others” in the following prayer based on the practice of fasting during Lent, the season of individual and collective repentance and reflection between Ash Wednesday and Easter.

One: Jesus,
our fast has been imposed by others,
our wilderness sojourn their choice more than ours.
Many: Our fast from the sacraments,
our fast from ordination:
our only choice was honesty.
One: With the scapegoats of the ancient Hebrews,
sexual sins of generations
have been heaped upon our backs,
and we have been sent away,
excommunicated, into the wilderness to die.
Many: Yet we choose life,
even in our deprivation
One: Jesus, lead us to discern our call
parallel to your own:
rebelling against the boundaries,
questioning the self-righteous authorities,
breaking the Sabbath law
to bring healing.


This prayer comes from “Rite for Lent” by Chris Glaser, published in Equal Rites: Lesbian and Gay Worship, Ceremonies, and Celebrations. Glaser spent 30 years struggling with the Presbyterian Church for the right to ordination as an openly gay man before he was ordained to the ministry in Metropolitan Community Churches in 2005. He writes progressive Christian reflections at chrisglaser.blogspot.com.

“Faggots We May Be,” a 2015 poem by Georgia poet S. Alan Fann, makes connections between gay men burned to death, global warming and the Rainbow Christ.

It is horrifying to remember the "burning times," especially for those LGBT people who consider themselves part of the Christian tradition. Let us rise from the ashes with these verses from the Bible:

Create in me a clean heart, O God, and put a new and right spirit within me.
For thou hast no delight in sacrifice; were I to give a burnt offering, thou wouldst not be pleased.
[Psalm 51: 10, 17]

Is such the fast that I choose,
a day for a you to humble yourself?
Is it to bow down your head like a rush,
and to spread sackcloth and ashes under you?
Will you call this a fast, and a day acceptable to God?
Is not this the fast that I choose:
to loose the bonds of wickedness,
to undo the thongs of the yoke,
to let the oppressed go free,
and to break every yoke?
Is it not to share your bread with the hungry,
and bring the homeless poor into your house;
when you see the naked, to cover them,
and not to hide yourself from your own flesh?
Then shall your light break forth like the dawn,
and your healing shall spring up speedily.
[Isaiah 58:5-8]

“Burned for sodomy” (Queering the Church)

Lest We Forget: The Ashes of Our Martyrs (Queering the Church)

Here are the 10 countries where homosexuality may be punished by death (Washington Post, Feb. 24, 2014)

BURN BABY BURN: A Knight, a Squire, a Bishop, a Steward, Five RC Monks and Millions of murders initiated by bigots at Church! (Eruptions at the Foot of the Volcano Blog)

A History of Homophobia, 4 Gay Heretics and Witches" (Rictor Norton)

Queering All Saints and All Souls, Celebrating the Queer Body of Christ by Adam Ackley (Huff Post) (litany also suitable for Ash Wednesday)

Blessing the Dust: A Blessing for Ash Wednesday by Jan Richardson

International Holocaust Remembrance Day: We all wear the triangle (Jesus in Love)

by Louis Crompton
___
This post is part of the LGBTQ Calendar series by Kittredge Cherry. The series celebrates religious and spiritual holidays, events in LGBTQ history, holy days, feast days, festivals, anniversaries, liturgical seasons and other occasions of special interest to lesbian, gay, bisexual, transgender and queer people of faith and our allies.