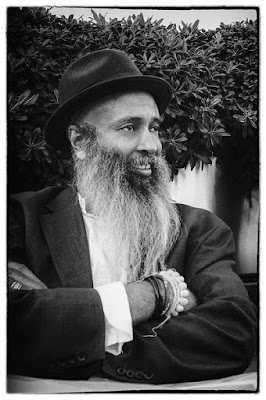 In memory of
Ibrahim Farajajé

He died last night (a few minutes after midnight on Feb. 9) surrounded by family and friends at Alta Bates Medical Center in Oakland. He had been hospitalized since mid-January after a massive heart attack. He was 63.

He spent 21 years as professor of cultural studies at the Starr King School for the Ministry, a Unitarian Universalist/Multireligious member school of the Graduate Theological Union in Berkeley, CA. He was planning to retire at the end of the 2016-17 academic year.

I knew him as Elias, and I remember him as a great thinker who embodied fluidity of sexuality, race, religion, language and much more.

Elias made a big impression on me personally when I first heard him speak at a Metropolitan Community Church conference in the 1990s.

I took the initiative and invited him to submit a liturgy for “Equal Rites: Lesbian and Gay Worship, Ceremonies and Celebrations.” As co-editor of the book, I worked to ensure that his unique voice was included in the book.

In his bio for the book, he described himself as “a queer-identified bisexual / two-spirit person” of African and Cherokee ancestry.

As I remember it, Elias was the last of about 30 contributors to submit his manuscript. I was thrilled when it came by fax in a large typeface, using up the entire roll of fax paper!

It was titled “Invocation of Remembrance, Healing and Empowerment in a Time of AIDS.” His opening words then are strikingly appropriate as we celebrate the life of the theologian who wrote them:

To the living and the dead, we bear witness. We gather in an act of remembrance of all of our ancestors and in a particular way of all those LGBT people of color who have died in the struggle with AIDS, breast cancer, and ovarian cancer, but also of those who were denied adequate health care and were target of racism, sexism, poverty, violence, homohatred, and other evils. Ours is a remembrance rooted in a spirit of solidarity and a spirit of resistance -- a resistance that strengthens and empowers us to live and act boldly….

He also wrote the foreword to “Sexuality, Religion and the Sacred: Bisexual, Pansexual and Polysexual Perspectives,” edited by Loraine Hutchins and H. Sharif Williams (2012).

His voice lives on in a video interview and in the hearts of those who knew him.

Posted by Kittredge Cherry at 8:58 PM

He was a great one. The world is poorer in his departure and richer because he was lent to us for a spell by the Creator.

A dear friend and brother - and teacher. Like so many, I am in mourning. I hope we will carry on his legacy with some of the same love, energy, and risk he brought to his life's work. Thanks for remembering Ibrahim (Elias), Kitt.