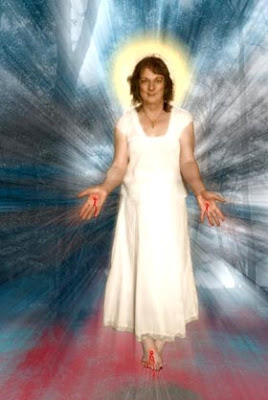 Jesus is a trans woman in the poster for “Jesus, Queen of Heaven”
More than 300 conservative Christian protesters picketed a play about a transsexual Jesus recently in Glasgow, Scotland.

Waving signs and singing hymns, they blocked traffic for two hours on opening night of “Jesus, Queen of Heaven” at the Tron Theatre last week. The play was written and performed by Jo Clifford (formerly John Clifford), whose stated goal was to create greater understanding of transgendered people like herself.

The play expresses a theme of love and tolerance in keeping with Jesus’ own teachings in the Bible. The poster shows Clifford posing as Christ in a white dress with a halo and crucifixion wounds.

Promotional materials sum up the play this way: “Jesus is a transsexual woman. And it is now she walks the earth. This is a play with music that presents her sayings, her miracles, and her testimony. And she does not condemn the gays or the queers or the trans women or the trans men, and no, not the straight women nor the straight men neither. Because she is the Daughter of God, most certainly, and almost as certainly the son also. And God’s child condemns nobody. She can only love...”

In contrast, protestors condemned the play with signs saying “God: My Son is Not a Pervert” and “Jesus, King of Kings, Not Queen of Heaven.”

Clifford said in a news interview that she was deeply offended by the protestors’ misunderstanding of her play and their prejudice against transgenders.

The production is part of the publicly funded “Glasgay!” festival, Scotland’s annual celebration of GLBT culture.


I believe that it’s important to envision a transgender Jesus because Christ represents God made flesh, and we are all created in God’s image, whatever our gender identity or sexual orientation. When we can imagine God as transgender, it is easier to recognize the divinity within the transgendered people around us. The transgender Christ is especially valuable to counteract the bigots who use Christian rhetoric to justify discrimination against GLBT people.

,” a play by Terrence McNally about a gay Christ figure. Bomb threats almost prevented its off-Broadway opening in 1998.
____

The last line of "Where Have All the Flowers Gone" is: "When will they ever learn." When will the raucous, rancorous, vicious radical religiounists ever learn that Jesus had only ONE message -- LOVE is all that matters, and judgmentalism is totally incompatible with everything Jesus taught. To say one believes in Jesus, but to deny that basic message makes one a liar.