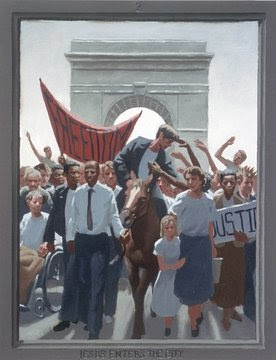 Jesus Enters the City (from The Passion of Christ: A Gay Vision)
by F. Douglas Blanchard


A queer version of Christ’s Passion is running in daily installments this week from Palm Sunday through Easter. Each daily post features a queer Christian painting and an excerpt from the novel Jesus in Love: At the Cross


After passing through the village of Bethany, we came to the place where the Mount of Olives starts descending into the Kidron Valley. I usually paused here to admire the panoramic view of Jerusalem on the other side of the valley, but today I saw something even more dramatic. Thousands of people thronged the road all the way to Jerusalem.

They roared when they first saw me. “Hosanna! Blessed is the one who comes in the name of God—the king of Israel!” They waved palm branches as they shouted. They covered the road with the leafy branches. Many people were even removing pieces of their own clothing and spreading them on the road….

Tears filled my eyes when I saw the city rising behind its walls, so close, yet so standoffish. My divine heart ached from the memory of all the violent rejections that God had suffered in this place, even though it was called the city of God.

I pulled the donkey to a halt and let my tears flow freely as I cried out to my city, “O Jerusalem, Jerusalem, killing the prophets who are sent! So many times I wanted to gather my people together like a hen nestling her chicks under her wings, and you refused! If only you knew even today what makes for peace! But you don’t see it.”

I sobbed, overcome by sorrow.

Most in the crowd interpreted my lament as the tactics and theatrics of a man with political aspirations. The one who was most keenly attuned to me in that moment was John, who came up and touched my foot in reverence and condolence. His dark eyes poured out the tragic sense of helplessness he felt in the face of my grief. He was blind to how much his gesture comforted me. The donkey twisted his head around and eyed me, wondering what to do. I urged him onward into Jerusalem.


(Continued here tomorrow)
___
F. Douglas Blanchard is a New York artist who teaches art at City University of New York and is active in the Episcopal Church. Much of his art explores history, including gay experience.

___
[Note: For a woman’s version of Christ’s Passion, see “A Women’s Way of the Cross” by Julie Lonneman at:
https://www.trinitystores.com/?collection=74
Posted by Kittredge Cherry at 12:01 AM

An excellent Way of the Cross by Katie Sherrod is available here Women of the Passion: A Journey to the Cross.

This is doubly powerful for me because a short while ago I viewed the movie version of the musical Godspell again. In that, Jesus' lament for Jerusalem was dramatically set against a pre-nine-eleven shot of the Twin Towers. If only we could learn to take Jesus at his word!

It's so good to see Doug Blanchard's wonderful painting again. These paintings were extraordinary when I first saw them
all together at the Festival of Alternative Spiritual Art in Taos, New Mexico, in 2007. So hi Doug if you are out there!!

Nice surprise to wake up on Palm Sunday to 3 lovely comments from women!

Ann, thanks for recommending the Women of the Passion book -- I’ll have to check that out. Trudie, my blood ran cold when I read that the World Trade Center was the backdrop for Jesus’ lament in the Godspell movie. Audrey, we have more Doug Blanchard art coming up later this week, so stay tuned.

Palm Sunday greetings to all!