Her Majesty looks down on a nude black Jesus as Axel Schwaigert teaches
Queen Elizabeth seemed to look down in disapproval when images of Jesus as black, gay or female were shown at a European church conference recently.

The alternative Christ figures were shown by Axel Schwaigert in his workshop “Art That Dares: Images of the Holy” at the European Conference of Metropolitan Community Churches (MCC) held in Manchester, England in November.

Schwaigert, pastor of MCC Stuttgart, Germany, says he was so busy presenting the Europakonferenz workshop that he didn’t notice the odd contrast between Her Majesty and the controversial art.

An especially funny photo (above) shows a prim and proper queen looking down her nose at a triumphant black Jesus in all his naked glory. The painting is “Triumph of the Light” by Becki Jayne Harrelson.

Much of the art in the workshop has offended conservative Christians, but Schwaigert said that it inspired the people at his workshop, adding “Somebody immediately drew a transgendered female to male christ!”

Schwaigert went on to report, “I already suspected that people would not be shocked. We Europeans deal differently with nudity than the average American. But it was so interesting to see how people started to think... I showed one of the female christs, very beautiful and naked on the cross and somebody asked: and where am I? where is the middle aged women, slightly out of shape, with hanging [breasts]...? And that is exactly the kind of thinking we need: Where am I in all of that...”

Schwaigert hopes to lead the workshop again for more conservative audiences. His workshop included many images from my book “Art That Dares: Gay Jesus, Woman Christ, and More 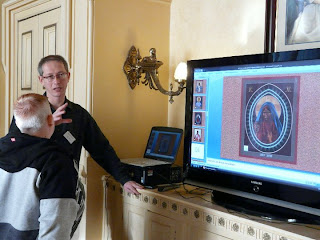 Posted by Kittredge Cherry at 11:20 AM