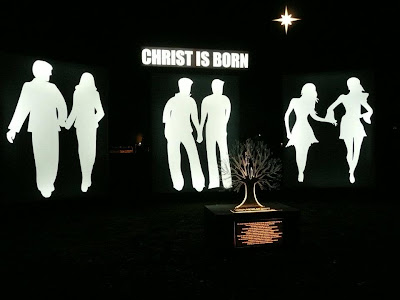 Vandals knocked over the same-sex couples in a manger scene at Claremont United Methodist Church in Claremont, CA, doing $3,000 in damage. The destruction proves the ongoing need for religious images that affirm LGBT people.

The Claremont church dared to re-imagine the Nativity scene as three couples -- gay, lesbian and heterosexual. They stood on the church lawn in life-sized silhouettes built from 600-pound light boxes. Each pair held hands beneath the star of Bethlehem. The words “Christ is born” blazed above them. There was no baby Jesus, but a small tree of life grew atop a statement pointing out that “Christ was the victim of hate and intolerance while he taught love and compassion.” After the attack, only the straight couple was left standing.

The Claremont Nativity has various meanings. It suggests that Christ is born anew to every couple, regardless of their sexual orientation. The scene also implies that queer people today are following the star in search of Christ, hoping that there will be room at the manger for gays and lesbians.

Leaders at the Claremont church emphasized that they wanted to show where Christ might be born today. Since 1993 the church has been a “reconciling” congregation, committed to welcoming LGBT into the full life of the church. “We do believe that Christ is in the world for the outcast and not for the privileged, and so each year we want to represent that through our Nativity scene,” youth minister Rev. Dan Lewis told KTLA-TV news.

For the last six years artist John Zachary has worked with the church to create progressive versions of the Nativity scene, but nobody damaged them until now. Previous versions addressed themes of poverty, war, immigration, racism and prison. When the Holy Family was shown as homeless in an alley full of trash and shopping carts, strangers spontaneously left bags of food and clothing at the Nativity, prompting the church to launch a Christmas homeless outreach.

The gay and lesbian Nativity evoked no such compassion. Police quickly labeled the attack a hate crime because it occurred on church property and targeted a specific group: gays and lesbians. The crime occurred on Christmas Eve and remains unsolved.

I take this attack personally because Christian conservatives made nasty accusations of blasphemy against me for creating my own gay and lesbian Nativity scenes. Like the Claremont church, I was motivated by a desire to communicate the love of God for all.  Last month I also coordinated a Queer Nativity project with liberating images from 7 people here at the Jesus in Love Blog.  I documented other attacks on LGBT Christian art in my book Art That Dares: Gay Jesus, Woman Christ, and More

Claremont’s gay and lesbian Nativity is one of the best that I have seen. Vandals should have stopped to reflect on the message written at the base of its tree of life: 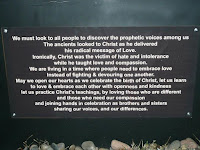 “We must look to all people to discover the prophetic voice that is among us. The ancients looked to Christ as he delivered his radical message of Love. Ironically, Christ was the victim of hate and intolerance while he taught love and compassion. We are living in a time where people need to embrace love instead of fighting and devouring one another. May we open our hearts as we celebrate the birth of Christ. Let us learn to embrace each other with openness and kindness. Let us practice Christ’s teachings by loving those who are different and those who need our compassion and join hands in celebration as brothers and sisters, sharing our voices, and our differences.”

Thanks for writing about this, Kitt. GLBT people and activists are accused to desecrating religious icons. Yet, it seems like OUR religious images and art are too often targeted for ridicule and damage.

Excellent point, Jon! We LGBT folks get accused of blasphemy, while the self-righteous right-wing Christians commit sacrilege against our religious icons. The debate is usually framed as freedom of speech (for LGBT people) versus freedom of religion (for Christian conservatives). But LGBT Christians also have a right to freedom of religion. I talked to staff at the church yesterday and nobody has been arrested yet for this hate crime.

I would like to see more "liberal religious" people making freedom of religion arguments. For some reason, we've allowed only one particular religious viewpoint, which is in fact a minority view even among Christians in many cases, to serve as the definition of "religion" for a long time. I would like to see more people arguing that laws restricting gay marriage interfere with their right as a welcoming Christian (or other religious or non-relgious person) to act in accordance with their deeply held convictions.

I agree, Laura! I hadn’t thought of this argument myself until I started reading and responding to comments on this post. We “progressive Christians” deserve freedom to express our faith as much as the conservatives do, and it seems to me that this could well apply to same-sex marriage.

It's definitely a religious liberty issue. The MCC has been seeking marriage equality since 1968 or 1969. The UCC general synod voted to affirm all marriages, regardless of sexual orientation, back in 2005. My own local church has been performing commitment ceremonies since the early 90s.

Well, some religions are "more equal" than others, don't you know. And that's precisely the point. But it's hard to see that social reality when no one is arguing for their right to interpret scripture and tradition according to the dictates of *their own* conscious. If we make those arguments, though, the haters *will* show their true colors. They don't view our religion as valid, and while that may make prefect sense to them, the wider culture quite readily recognizes it for what it is.... bigotry. But unless they actually see it happening... somehow it just doesn't occur to them. So we definitely need to create more such opportunities, I'd say. Remember Kitt, how I congratulated you on having generated so much hate mail when you put up the lesbian nativity scene before? Well this is what I was talking about. Getting them angry enough to show their true colors is an *accomplishment*. It *matters*. It's what non violent resistance is all about. And here you are... spreading word about it far and wide in the Huff Post!! So well done again!! :) :) :)

Yes, CJ, the injustice and hate was made visible in Claremont. From my interactions with the church staff in Claremont, I’d say that even they were surprised by the force of the negativity -- and by how few church leaders rallied to their support in the wake of the attack.

I also tried to use this principle of non-violent resistance when when I was representing MCC at the National Council of Churches. Some of the liberals there gave lip service to their support for LGBT religious rights, but when we forced a vote on our status in 1993, the truth came out: They didn’t even consider us good enough to be observers. I don’t think this has changed in the years since then.

Jon, getting back to the point you made: I’m well aware of MCC’s pioneering work blessing same-sex couples as the former PR director for the whole denomination. Audrey and I had our ceremony at MCC-SF 25 years ago this year. But we called them “Holy Unions.” In my lifetime I have seen great progress toward actually conceiving of our relationships as marriages, and daring to claim the language of marriage for ourselves as gays and lesbians. Thanks for being part of the change that we need.

hmmm, this inspires me to do a work on the three wise men