Epiphany: Queer eye for the Magi

“Epiphany” by Janet McKenzie, copyright 2003.
www.janetmckenzie.com
Collection of Barbara Marian, Harvard, IL
Reimagining the three kings as queer or female gives fresh meaning to Epiphany, a holiday celebrating the visit of the Magi to the infant Jesus. It is observed on Jan. 6.

The word “epiphany” also refers to a sudden, intuitive perception. By looking at the Bible and church history from a LGBT viewpoint, people can experience new insights -- their own personal “epiphanies” of understanding. New interpretations of the wise ones known as the Magi include:

For a new version of this article, click this link to Qspirit.net:
Queer Epiphany: Three kings or three queens?


Queer Magi
Although they are often called the “three kings,” the Magi stand in contrast to worldly King Herod who sought world domination by massacring the “holy innocents” who might grow up to take his throne. The wise Magi who followed the star to find the newborn Jesus were wizards who provide a higher wisdom and astrologists with expertise in cosmic balance.

The Magi played the shamanic role often filled by eunuchs, an ancient term for LGBT people, says Nancy Wilson in her book Outing the Bible: Queer Folks, God, Jesus, and the Christian Scriptures

“They were Zoroastrian priests, astrologers, magicians, ancient shamans from the courts of ancient Persia. They were the equivalent of Merlin of Britain. They were sorcerers, high-ranking officials, but not kings—definitely not kings. But quite possibly, they were queens. We’ve always pictured them with elaborate, exotic, unusual clothing—quite festive, highly decorated and accessorized! …Also, the wise eunuchs, shamans, holy men were the only ones who had the forethought to go shopping before they visited the baby Jesus!

They also have shamanistic dreams. They deceive evil King Herod and actually play the precise role that many other prominent eunuchs play in the Bible: they rescue the prophet, this time the Messiah of God, and foil the evil royal plot against God’s anointed.”

The concept of the queer Magi is amplified by Virginia Ramey Mollenkott, author of Omnigender

. “My guess is that they were people who today would be termed transwomen,” she writes in the brochure “Gender Identity and Our Faith Communities.”

Eunuchs and cross-dressers were surprisingly common in the Mediterranean world of the Bible and later. By happy coincidence, a cross-dressing saint happens to have a feast day on Jan. 5, the day before Epiphany. Apollinaria of Egypt, put on men’s clothing and presented herself as a eunuch named Dorotheos in order to live as a monk. 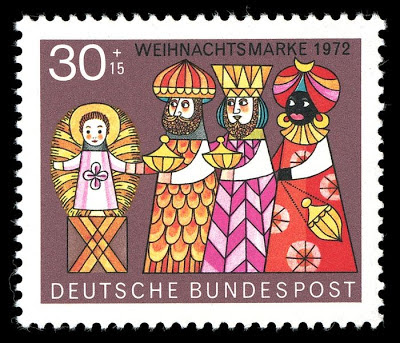 Three stylish Magi wear fabulous outfits on a 1972 German Christmas stamp (Wikimedia Commons)
Female Magi
Female Magi have been envisioned by artists in a gender-bending move that sometimes causes controversy. Epiphany itself is celebrated as “Women’s Christmas” (Nollaig na mBan) in Ireland, where men assume the household duties for the day so women can celebrate together at the end of the holiday season.

A multi-racial trio of female Magi visits the baby Jesus and his mother in “Epiphany” by Vermont artist Janet McKenzie. Instead of the traditional three kings or three wise men, the artist re-interprets the Magi as wise women from around the world.

Jan Richardson, an artist and Methodist minister in Florida, also portrays the Magi as women of different races in “Wise Women Also Came,” an image that appears on the cover of her book “Sacred Journeys: A Woman's Book of Daily Prayer.”

The unconventional portrayal of the Magi makes good theological sense. Barbara Marian, who commissioned the McKenzie painting, explains: “The story of the Magi in the Gospel of Matthew allowed the Jewish followers of Jesus to imagine the unthinkable -- God’s grace extending to the outsiders, the gentiles. Who are the outsiders in our world? Can we imagine the favor of God extending beyond the human boundaries of race, class, nationality, ethnicity, religious devotion, and gender?”

Marian commissioned “Epiphany” for the Nativity Project, which revisits and revitalizes the Gospel with new images of women. “It’s easy to get so caught up in regal images of Matthew’s night visitors that we miss the core message -- Christ for all people,” Marian says.

Conservative Christians protested against the inclusive “Epiphany” in 2007 when it appeared on the Christmas cards of the Most Reverend Katharine Jefferts Schori, presiding bishop of the Episcopal Church.

The Standing Committee of the Episcopal Diocese of Ft. Worth, Texas, sent a notice to clergy and 2007 convention delegates condemning Jefferts Schori for her choice of art. “Happy Multicultural Feminist Celebration Day,” sneered the headline of a traditional Anglican blog where nearly 100 comments were posted condemning the image as “stupid,” “faux-nouveau hipster theology” and worse. For more info, see my previous post Conservatives blast inclusive Christmas card.

McKenzie denies the accusations that she is trying to be divisive and rewrite scripture. “Of course this is as far from my thinking as possible,” she says. “I feel called to create sacred and secular art that includes and celebrates those systematically ignored, relegated and minimized, and for the most part that is women and people of color.”

The artist continues to be amazed that her loving images provoke so much anger. “Even this gentle image of a loving Holy Mother and Child, with no agenda except to include and honor us as the nurturing feminine beings we are, surrounded in community with other women, is still misunderstood -- even at this late date,” she says.

McKenzie has weathered even bigger storms before. Her androgynous African American “Jesus of the People” painting caused international controversy when Sister Wendy of PBS chose it to represent Christ in the new millennium.

Critics focus on the content of McKenzie’s art, but her outstanding artistic style is one reason that her work attracts attention. The Vermont artist uses drawing and line with oils to build images that glow. Her painting technique and pastel colors are reminiscent of American Impressionist Mary Cassatt, who is famous for painting intimate scenes of mothers and their children.

The controversy over McKenzie’s work is a reminder of the power of art, and the continuing need for progressive spiritual images. Opposition seems to fuel her passion to paint. “We all need to find ourselves included within the sacred journey of life, and afterlife,” McKenzie says. “I have been surprised to find archaic and out-dated hate still in place, still alive and well and fueled by fear, in response to some of my art. I have made the decision to respond to such hate not in the way it comes to me, but by creating ever more inclusive art that confronts prejudice and hate. The only path open to any of us is the one of love.”

McKenzie’s art is featured in my book “Art That Dares: Gay Jesus, Woman Christ, and More” and her book “Holiness and the Feminine Spirit

(Special thanks to Barbara Marian for permission to quote from her article “Recasting the Magi.”) 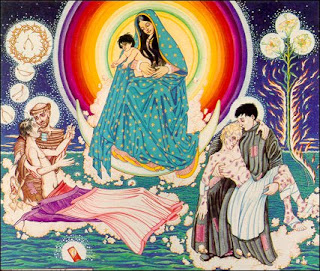 St. Francis and St. Aloysius are the wise men visiting the baby Jesus in this icon.  Instead of the usual gold, frankincense and myrrh, the “gifts” they bring to the Christ child are people with AIDS, perhaps gay men. The baby Jesus reaches eagerly to receive these gifts. The child and his mother appear in a form popular in Mexico and other Latino cultures as Our Lady of Guadalupe and El Santo Niño de Atocha. The halo around them echoes the colors of the rainbow flag of the LGBT community. McNichols offers a prayer with this icon:

Dearest Mary, Our Lady of Guadalupe,
Mother of the poor and the oppressed,
we watch full of reverence
and joy as St. Francis and
St. Aloysius bring the gifts of
these two people afflicted with AIDS
to the Holy Child in your arms,
who is so eager to receive them.
Teach us to find and embrace
your Son Jesus in all peoples,
but most especially those who
are in greatest need and
who suffer most.
Amen

In closing, the question arises: What gifts are queer people bringing today to Christ, the church and the world?
___
Related links:

This post is part of the LGBT Calendar series by Kittredge Cherry at the Jesus in Love Blog. The series celebrates religious and spiritual holidays, holy days, feast days, festivals, anniversaries, liturgical seasons and other occasions of special interest to LGBT and queer people of faith and our allies.

As always, I think your posts are growing richer and richer! You don't just bring back magnificent posts from the past, but expand and develop them. I am delighted, again, to see Janet McKenzie's wonderful work revisited. Today my own celebration of the Epiphany will include going through the book of her work that I got because you feataured it before, as well as "Art that Dares" and my own beloved "The Story of the Other Wise Man" by Henry van Dyke.

It never ceases to amaze and appal me at how narrow and rigid the spirituality of many contemporary so-called Christians has become, that they cannot appreciate the truly inspired insights of others.

You correctly discerned that I am making an effort to expand and improve my posts when I run them again for holidays and the like. My understanding of these subjects grows and deepens year after year, and I want to share that with readers. I’m glad that it’s working.