Blasphemy or fresh perspectives? What others say 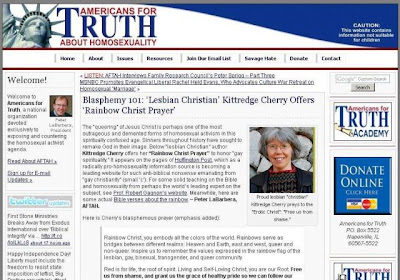 Charges of blasphemy are being hurled again against my queer Christian writing. This time the target is my new Rainbow Christ Prayer.

The fun part is how they reprint the whole prayer, with the blasphemous parts conveniently highlighted in bold. It’s kind of like a red-letter Bible where the words of Jesus are printed in red ink. To Americans for Truth, the whole sexuality section of the Rainbow Christ Prayer is unmitigated blasphemy, while everything we wrote about love is OK. (They neglected to mention the name of my co-blasphemer, Patrick Cheng, who wrote the prayer with me.)

Meanwhile, my Jesus in Love blog was honored as a “meaty blog” with “fresh perspectives” on a new list of "12 Queer Blogs to Watch" at Where the Girls Go.

I’m not sure which is the greater compliment: To be praised by the young queers or condemned by the right wing conservatives!

Americans for Truth about Homosexuality was a 501(c)3 United States tax-exempt organization until that status was revoked in 2010 after years of failure to file appropriate paperwork. Headed by Peter LaBarbera, it is classified as a hate group by the Southern Poverty Law Center.

You are doing something right!

Another badge of honor. They must feel threatened by you, or they would not have singled you out, a measure of your success.

Again, mazel tov my friend. And you're so right- you're doubly honored. And you're also right about the service people like this do by highlighting work like yours. Quite honestly, I think the over the top haters have done more to move the "gay agenda" they dreamed up than any aggregate of gay activists could hope to. More people have heard about it through them than probably any other way...

May I offer you my profound congratulations on this greatest honor bestowed upon your site, Kitt! I'm honored to be associated with you!

Many thanks to all the friends and followers who left supportive comments here and elsewhere! I read and cherish every message of gratitude.

As someone reminded Patrick and me over at Facebook, the Bible tells us, “Blessed are you when [people] hate you, when they exclude you and insult you and reject your name as evil, because of the Son of [Humanity].” Still, it’s great to hear directly from LGBTQ folk and allies who find value in seeing their lives reflected in the sacred.

I'm with you, Kitt! Be proud you are doing good work! You must be making a difference if the hate groups are attacking you!

Thanks for the encouragement, Valerie! It means a lot to hear positive feedback as well as the "honor" of being attacked for blasphemy.

Another friend suggested that we format the Rainbow Christ prayer together with the Stained Glass Rainbow Flag with Cross as an artwork that can be framed. The artist is looking into this exciting possibility.

I find myself returning again and again to Patrick’s book on grace… and while working on this piece I enjoyed reading and rereading parts of James Cone’s excellent “A Black Theology of Liberation.” Thanks for your comments, reviews, art and the other graciously given support.