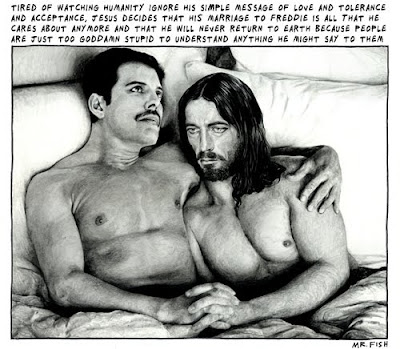 Artist Dwayne Booth, who uses the pen name Mr. Fish, created the image in reaction to a vote banning same-sex marriage in North Carolina this spring. After working through his rage, he decided to highlight the hypocrisy of anti-gay Christians indirectly by showing Jesus in bed with a gay icon.

Conservative Christian voters claimed that their opposition to same-sex marriage is based on the Bible, but in a statement the artist pointed out that the Bible is open to innumerable interpretations -- including Jesus as a radical hell-raiser who valued outcasts and accepted human differences.

“I chose Freddie Mercury as Jesus’ partner because, a.) he is immediately recognizable as a gay icon and b.) there is something both holy and tragic about Mercury’s life and premature death. In many ways it is a narrative that is not dissimilar to the Jesus narrative, both figures inspiring of love and beauty and self-assuredness removed from corporeal existence way too soon. In that way, they seemed like a perfect match,” Booth told the Jesus in Love Blog.

Mercury (1946-1991) was the lead singer and songwriter for the rock band Queen, composing such hits as “Bohemian Rhapsody” and “We are the Champions.” An acknowledged bisexual, Mercury was the first major rock star to die of AIDS.

The text accompanying Mr. Fish’s cartoon says, “Tired of watching humanity ignore his simple message of love and tolerance and acceptance, Jesus decides that his marriage to Freddie is all that he cares about anymore and that he will never return to earth because people are just too G-----n stupid to understand anything he might say to them.”

was published in 2011.
___
Special thanks to Mr. Fish for permission to share his cartoon here at Jesus in Love. And special thanks to Ann for alerting me to this amazing image.

John the Evangelist: The man Jesus loved (Jesus in Love)

Lazarus: Jesus’ beloved disciple? (Jesus in Love)
____
This post is part of the Queer Christ series series by Kittredge Cherry at the Jesus in Love Blog. The series gathers together visions of the queer Christ as presented by artists, writers, theologians and others.

Posted by Kittredge Cherry at 1:04 PM

Ann! Thank you again for alerting me to this amazing image of Jesus and Freddie. I just added a thank-you to you within the original blog post, with a link to your blog.

Yes I finally requested permission for Jesus and Freddie -- the artist agreed quickly once I sent the request. I have a big backlog of material for Jesus in Love, especially now that I am setting aside time to write text for an art book about Doug Blanchard’s series, “The Passion of Christ: A Gay Vision.”

The Mr. Fish drawing is absolutely magnificent. As you know, though, I can't accept the caption. The Jesus you so beautifully articulated in "Jesus in Love" knew the worst of human nature - that's the point of Incarnation - but didn't come to sulk about it, rather to transform it.

Freddie touched the entire world with his love-embracing energy and lyrics. 20 years after his death, I paid tribute to him on my artist’s blog with a new portrait at http://dregstudiosart.blogspot.com/2011/11/killer-queen-portrait-of-freddie.html This new work of art is inspired by the words of many of Queen’s songs.

Trudie, I also believe that Jesus would not give up on humanity like it says in the caption. You correctly point out that I expressed my vision of his all-forgiving, transformative nature in my “Jesus in Love” novels. On the other hand, I believe that Jesus was fully human as well as divine. I can accept that he had moments when he just felt like curling up in bed with a loved one and taking a break from the frustrations of his ministry.

Brandt, I’m always happy to meet a new artist. Thanks for the link to your new portrait of Freddie, complete with queenly crown. I like all the videos that you posted of Freddie singing too.

hey maybe you want to see this:

Your image of Jesus as the “new sexy boy” takes the gay Jesus theme in a new direction beautifully. Thanks, Alberto, for sharing them here. Let’s keep in touch!

Awww. So nice to think of Freddie again.