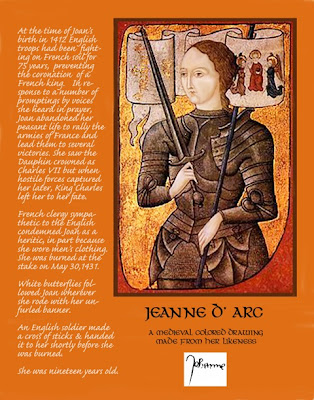 The show celebrates LGBT persons and their straight allies throughout history who have faced adversity and even death while striving to make the world a better place.

“That work is by no means complete!” curator Judith McManis says. “This exhibit is a continuum, a trajectory, relating some of the battles of the past in order to give energy and inspiration to those who continue in the cause.”

The exhibit honors historical saints such as Joan of Arc and the male couple Sergius and Bacchus. Contemporary figures in the show include religious leaders such as Father Mychal Judge, plus secular LGBT rights activists such as Harvey Milk and David Kato.

St. Paul’s is an open and affirming congregation of the Episcopal Church, so the show highlights courageous Episcopalians, including Integrity founder Louie Crew (pictured below) and prophetic leader Pamela Chinnis. Adding a local flavor are Vermont’s homegrown heroes such as Beth Robinson, founder of the Vermont Freedom to Marry Taskforce.

McManis, an artist who founded Laudata Liturgical Art and Calligraphy, says the exhibit grew out of her interest in contemporary icons of gay saints. However she decided not to use icons in this show, opting instead for images from historic documents, photos and drawings. The decision was based partly on copyright issues, but also in order to reach more viewers. “For some people, the 'religious' flavor of icon images was off-putting (they just weren't ready for the connection with what perhaps for them had been a not-so-positive experience),” McManis explains.

Sponsored by Integrity Vermont and Pride Vermont, “Prophetic Vision, Courageous Lives” the show will run through the end of July. For more info, visit the event’s Facebook page. 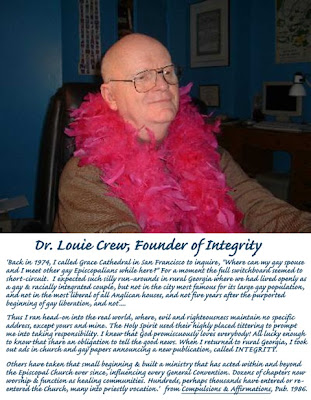 Sanctity And Male Desire: A Gay Reading Of Saints

Posted by Kittredge Cherry at 9:26 AM

We're so proud to be a part of St. Pauls. Good job Judith and Ernie. Lv, Keith and Penny