St. Aelred of Rievaulx
By Brother Robert Lentz, OFM, www.trinitystores.com
Aelred of Rievaulx (1109-1167) is considered one of the most lovable saints, the patron saint of friendship and also, some say, a gay saint. His feast day is today (Jan. 12).

For a new version of this article, click this link to Qspirit.net:
Aelred of Rievaulx: Gay saint of friendship


Aelred was the abbot of the Cistercian abbey of Rievaulx in England. His treatise “On Spiritual Friendship” is still one of the best theological statements on the connection between human love and spiritual love. “God is friendship… He who abides in friendship abides in God, and God in him,” he wrote, paraphrasing 1 John 4:16.

Aelred’s own deep friendships with men are described in Christianity, Social Tolerance, and Homosexuality

Boswell’s account inspired the members of the LGBT Episcopal group Integrity to name Aelred as their patron saint. Click here for the full story on how they won recognition for their gay saint.

Aelred certainly advocated chastity, but his passions are clear in his writing. He describes friendship with eloquence in this often-quoted passage from his treatise On Spiritual Friendship

“It is no small consolation in this life to have someone who can unite with you in an intimate affection and the embrace of a holy love, someone in whom your spirit can rest, to whom you can pour out your soul, to whose pleasant exchanges, as to soothing songs, you can fly in sorrow... with whose spiritual kisses, as with remedial salves, you may draw out all the weariness of your restless anxieties. A man who can shed tears with you in your worries, be happy with you when things go well, search out with you the answers to your problems, whom with the ties of charity you can lead into the depths of your heart; . . . where the sweetness of the Spirit flows between you, where you so join yourself and cleave to him that soul mingles with soul and two become one.”

Aelred supported friendships between monks, comparing them to the love between Jesus and his beloved disciple, and between Jonathan and David in his treatise on spiritual friendship. Louis Crompton, professor of English at the University of Nebraska, reports in Homosexuality and Civilization

that Aelred allowed the monks at his Yorkshire monastery to express affection by holding hands, a practice discouraged by other abbots.

Aelred’s writings are discussed extensively in a 2015 book by a prominent evangelical scholar in the new celibate LGBT Christian movement. Wesley Hill writes about friendship as a spiritual path, offering practical ways for building stronger friendships in Spiritual Friendship: Finding Love in the Church as a Celibate Gay Christian.”

The icon of Saint Aelred at the top of this post was painted by Robert Lentz, a Franciscan friar and world-class iconographer known for his innovative icons.  He faces controversy for his icons depicting same-sex couples. His Aelred image includes a banner with Aelred’s words, “Friend cleaving to friend in the spirit of Christ.” 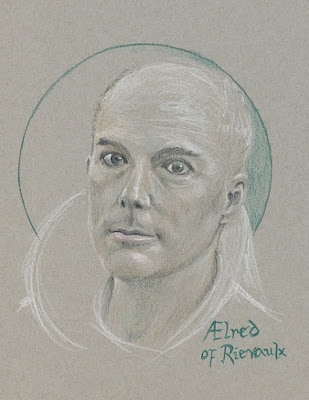 “Aelred of Rievaulx” by Tobias Haller
A bright-eyed icon of Aelred was sketched by Tobias Haller, an iconographer, author, composer, and vicar of Saint James Episcopal Church in the Bronx. He is the author of “Reasonable and Holy: Engaging Same-Sexuality.” Haller enjoys expanding the diversity of icons available by creating icons of LGBTQ people and other progressive holy figures as well as traditional saints. He and his spouse were united in a church wedding more than 30 years ago and a civil ceremony after same-sex marriage became legal in New York.

Another portrait of Aelred was drawn during his own lifetime. Aelred perches on an illuminated alphabet in the medieval manuscript "De Speculo Caritatis" “Mirror of Charity.”


Portrait of Aelred of Rievaulx from “Mirror of Charity” medieval manuscript, circa 1140 (Wikimedia Commons)
Queer theologian Hugo Cordova Quero writes about Aelred in his scholarly article "Friendship with Benefits: A Queer Reading of Aelred of Rievaulx and His Theology of Friendship.” It is included in “The Sexual Theologian: Essays on Sex, God and Politics,” edited by Marcella Althaus-Reid and Lisa Isherwood.

Quero quotes and analyzes Aelred’s words from “Mirror of Charity” on the death of his first close friend, a fellow monk named Simon: “I grieve for my most beloved, for the one-in-heart with me…” He goes on to explore Aelred’s subsequent love for an unnamed monk, putting his attachments to men into historical context with queer perspective. Click here to view the article online.

“Brother and Lover: Aelred of Rievaulx,” by Brian Patrick McGuire is a charming chronological account that traces the homoerotic impulse in Aelred’s life. McGuire, a history professor in Denmark, tells the story with a personal and informal writing style.

To read this post in Spanish / en español, go to Santos Queer:

Icons of St. Aelred and many others are available on cards, plaques, T-shirts, mugs, candles, mugs, and more at Trinity Stores