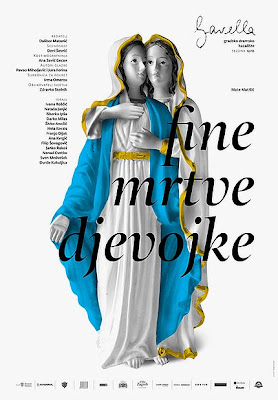 A poster with a lesbian Virgin Mary was withdrawn in Croatia yesterday after religious and political pressure. It advertised the play “Fine Dead Girls” at the municipal Gavella Theatre in Zagreb.

According to Croatian news reports, the mayor of Zagreb ordered theater director Darko Stazic to remove the poster from all public areas after an unprecedented campaign against it by Catholic and other religious groups. They denounced the poster as blasphemy.

Now the theater director is being criticized for cowardice by some LGBT Croatians advocating freedom of expression.

The controversial poster shows a traditional statue of Mary being embraced from behind by another woman. “Fine Dead Girls” (Fine Mrtve Djevojke) by Dalibor Matanic is about a young lesbian couple who move into a seemingly quiet apartment building in Zagreb. Soon they face hostility from neighbors and family, including a religious fundamentalist father. The theatrical version is based on the award-winning 2002 film of the same title.

The Croatian controversy is the most recent of many conflicts over LGBT religious images as freedom of religion clashes with freedom of speech. It is important to support LGBT Christian images because conservatives use religious rhetoric to justify discrimination against queer people.

Similar controversies are covered in my book Art That Dares: Gay Jesus, Woman Christ, and More. I report about the more recent controversies on this blog, including a gay Nativity in Columbia, a queer baby Jesus poster in New Zealand, a gay Jesus exhibit in Spain, “Our Lady” by Latina lesbian artist Alma Lopez, and a crucifix symbolizing the pain of gay men with AIDS by David Wojnarowicz at the Smithsonian.
____
Related links:


Posted by Kittredge Cherry at 2:03 PM

I guess I'm happy that such a beautiful image got to appear for albeit a short period of time- and it seems the show will go on!

What I see in the image that was considered so "evil" by the church authorities is exactly that same sort of compassionate and sustaining body-love; and it is totally "pro life" in the deepest and most Christlike sense.

Bill, I also find this image beautiful, and wanted to preserve and share it through my blog. It has a classic beauty and strikes a nice balance, being “queer” without being brash.

Trudie, I am in awe of your comparison to the loving touch between women in the Holocaust. I am awed by what these women were able to do in the worst of circumstances, and how it helped them survive. This is true “Eros,” the force of life and love united. I just went to Amazon and officially “liked” your review of “Sala’s Gift.”

On a related note, I have gotten permission from an artist to share a new queer Holocaust-related artwork here at the Jesus in Love Blog for International Holocaust Remembrance Day (Jan. 27.)

I will certainly look forward to you Holocaust Remembrance Day post. By the way, an earlier Holocaust story I reviewed, "A Train in Winter", actually also dealt with the theme that the survival of women, at a greater percentage than men in the same camp, could be attributed to the communal spirit of compassionate caring that the women seemed to be willing to engage in; nurturing is another vital aspect of Eros.