Same-sex kisses in church: Exhibit censored and vandalized in Italy 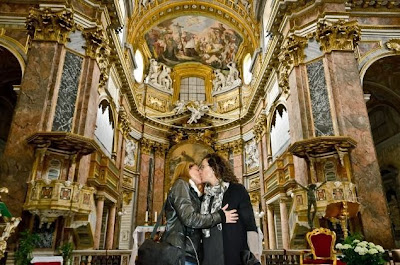 An exhibit of photos showing same-sex kisses in churches faced censorship and vandalism in Italy recently.

Artist Gonzalo Orquin photographed gay and lesbian couples kissing in front of altars at some of the most important ancient basilicas in Rome.

The photo series is titled “Si, Quiero,” which is the Spanish phrase used by the bride and groom at a wedding -- like “I do” in English. Literally it means, “Yes, I want to.” But the Vatican said no.

Update: “Si, Quiero” will be on exhibit in New York from April 30 to June 24, 2014 at the Leslie Lohman Museum of Gay and Lesbian Art. Click for their press release.

The Vicariate, which assists the Pope in carrying out his functions as the Bishop of Rome, threatened legal action to stop an exhibition of the photos at Galleria L’Opera in Rome. Italian law protects people’s religious sentiments and use of church buildings.

For security reasons the gallery complied and covered up the set of 16 photos in the “Si, Quiero” series before the opening on Sept. 25. They were hidden behind black cardboard while black crosses stood beneath it as a silent protest. Orquin also placed a photo on Facebook showing the covered artwork with a statement against the censorship. 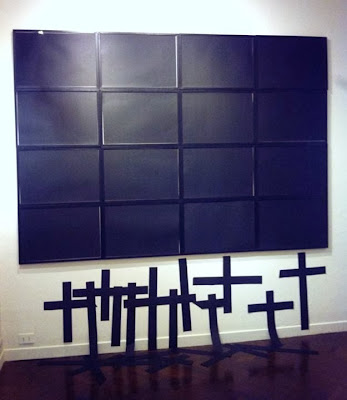 “Si, Quiero” by Gonzalo Orquín was concealed behind black cardboard at the gallery during the exhibit

The covered-up photos went on display as planned as part of a three-man “Trialogo” exhibit. But a group of hooded men broke in on Oct. 16 and vandalized three paintings with red spray paint. Apparently they were angry about the images of same-sex kisses in churches, but could not find them under the black cardboard. Instead they sprayed red blotches onto a painting of a woman priest and two other artworks.

Orquin is Spanish, but he has lived in Rome for eight years. “I am a Catholic. I believe in God deeply,” he said in the New York Daily News. “I think if you look closely at my pictures no one can find blasphemy or sacrilege. A kiss is a gesture of love, of tenderness between human beings.”

The artist said that gay, lesbian and straight people offered to pose for the photos. Locations include St. Peter’s Basilica, where the Pope presides over services throughout the year.

His choice of churches as the setting for same-sex kisses grows out of his own spiritual journey. “When I was child I learned that God is love, and I learned it in a church! What kind of love? Who decides what love is OK and why? Pope Francis has said recently that he is not one to judge anyone and he also said that the Roman Church belongs to every one,” he told HuffPost United Kingdom.

Here is a selection of other images from “Si, Quiero” by Gonzalo Orquín 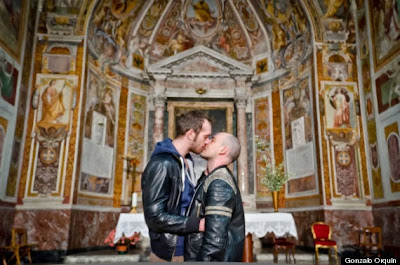 Special thanks to Scott Sella for the news tip, and to Gonzalo Orquin for permission to use his photos.
___
Related links:

The Photos The Vatican Didn't Want Italy To See (Advocate.com)

Other censorship and attacks on LGBT Christian art:

"Art That Dares: Gay Jesus, Woman Christ, and More" by Kittredge Cherry profiles contemporary artists whose queer Christian artwork has been censored or destroyed.
___
This post is part of the Artists series by Kittredge Cherry at the Jesus in Love Blog. The series profiles artists who use lesbian, gay, bisexual, transgender (LGBT) and queer spiritual and religious imagery.

What a tragedy that the church that claims to have kept the tradition of Jesus has totally rejected love and tenderness!

In Spanish, "quiero" does mean "I want" but it is also used to mean "I love you." I was wondering if "Yes, I love you" might be a better translation of the exhibit title than "Yes I want to."

Translating the name of the artwork is a challenge. Thanks, Giddy, for offering an alternate Spanish translation. I wrote to the artist to ask his opinion. I am thinking a lot about such questions these days because my articles about LGBT saints are being translated into Spanish at Santos Queer.

Trudie, your comment gets at the core issue. These images express love and Jesus taught love, but the church is rejecting love.

These are such beautiful photos.

I asked the artist about how to translate the title “Si, Quiero” into English. He suggested the translation, “Yes, I want it.” He explained that the phrase used by the bride and groom at a wedding -- like “I do” in English.

“Si, Quiero,” an exhibit of Gonzalo Orquin’s controversial photos of same-sex kisses in church, will be on exhibit in New York from April 30 to June 24, 2014 at the Leslie Lohman Museum of Gay and Lesbian Art. Click for their press release.

Exhibition 'Dual' with Gonzalo Orquín in The Netherlands, March 9-May 18 2014.

The complete series including a special made artbook ‘Sí, quiero’ about Spanish but in Italy living artist Gonzalo Orquín is to be seen at the exhibition ‘Dual’ in the Netherlands at MooiMan male-art gallery. The book also includes the complete series of photo’s but also the letter, the threat by the Vatican which was the reason that it could not be showed in Italy but proudly in The Netherlands. The exhibition ‘Dual’ last until May 11 but goes on one week more until May 18. Be welcome!

MooiMan male art gallery is a international operating gallery showing layered exhibitions such as ‘QueerRussia: the hidden (p)art’ in 2013, telling the story behind LGBT rights and artists in Russia and now ‘Dual’ in which homosexuality and the influence of the Vatican is the basis.

Thanks you, Sandro, for the helpful link to Orquin's work on your gallery site. I will also add the link to the main article about "Si, quiero."