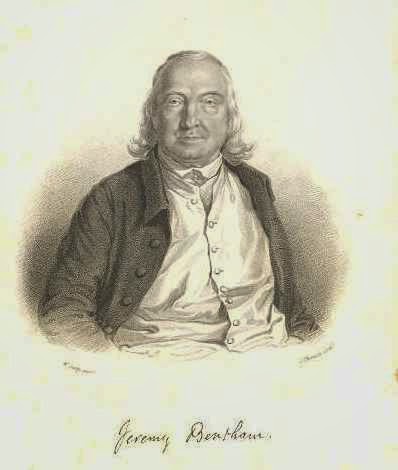 Biblical arguments for LGBT rights and a queer Jesus may seem like new ideas, but they were pioneered about 200 years ago by an influential British philosopher -- in writings that were never published until recently.

Philosopher Jeremy Bentham (1748 - 1832) presented Biblical evidence for Jesus’ homosexuality as part of his theological defense for same-sex love in “Not Paul, but Jesus Vol. III.” It was published for the first time in 2013 and is freely available to download or view online. He died on this date (June 6) in 1832.


For a new version of this article, click this link to Qspirit.net:
Homosexuality of Jesus explored by 18th-century philosopher Jeremy Bentham

Bentham didn’t dare publish it during his lifetime because he feared being labeled a “sodomite” himself. At the time “buggery” was punished with death by hanging in England.

This champion of sexual freedom was far, far ahead of his time. “Not Paul, but Jesus” lays out many of the same arguments that are still used today by LGBT Christians and our allies: debunking the scriptures typically used to condemn LGBT people and pointing out that Jesus never said anything about homosexuality. Bentham goes on to present an idea that many still consider blasphemous. He suggests that Jesus had male-male sexual relationships.

Bentham wrote the book so long ago that the word “homosexuality” had not been invented yet. Instead he has a chapter titled “The eccentric pleasures of the bed, whether partaken of by Jesus?” His language may sound quaint, but his ideas are right on target for today. Bentham himself struggled with words for what we call homosexuality, deliberately creating new vocabulary so he could avoid the negative connotations associated with the terminology of his day (sodomy, buggery, perversion, etc.).

Bentham is best known as the founder of Utilitarianism, a philosophy that advocates “the greatest happiness of the greatest number of people” A respected thinker during his lifetime, Bentham was also far advanced on a wide range of other legal, economic and political issues. He coined the word “international.” He was one of the first proponents of animal rights. He supported women’s equality and opposed slavery and capital punishment. He corresponded with various world leaders, including US presidents Jefferson and Madison. Several South and Central American nations sought his advice in creating their constitutions and legal codes. Born and raised in a devout Anglican family in London, he became an agnostic who believed that religion was an instrument of oppression. His solution was separation of church and state.

In the third volume of “Not Paul, but Jesus Vol. III,” Bentham corrects false interpretations of what would later come to be called the “clobber passages.” He identifies the sin of Sodom as gang-rape. He puts the sexual prohibitions of the Hebrew scriptures into historical context, pointing out that many of the other taboos are no longer enforced.

He dismisses Paul’s condemnations of homosexuality as an asceticism not shared by Jesus himself. He sees romantic love between Old Testament heroes Jonathan and David -- and possibly between Jesus and his beloved disciple John, noting that the Bible reports their loving touch without condemnation.

Bentham goes on to analyze the account in Mark’s gospel of “the stripling in the loose attire” (now usually known as “the naked young man”) at the arrest of Jesus -- a passage that continues to fuel 21st-century speculations in the LGBT community. He urges readers to consider the most “probable interpretation” for the nakedness. (In a different manuscript he made it clear that the youth was probably a male prostitute loyal to Jesus.) Bentham even hints that Jesus was killed for homosexuality, asking readers to consider what interaction with a naked man could be “so awful” that it leads to cruel execution.

Pro-LGBT Christians today often note that Jesus never said anything against homosexuality. Bentham makes the same point in his own elaborate way, with sentences such as: “In the acts or discourses of Jesus, had any such marks of reprobation towards the mode of sexuality in question been to be found as may be seen in such abundance in the epistles of Paul—in a word, had any one decided mark of reprobation been so to be found as pronounced upon it by Jesus, in the eyes [of] no believer in Jesus could any such body of evidence as hath here been seen [to] present itself be considered as worth regarding.”

Indeed Bentham's main purpose in all three volumes of “Not Paul, but Jesus” is to show the error in following the ascetic Paul instead of the true Christianity of the more tolerant Jesus, who accepted the human pursuit of pleasure. This concept is introduced in the first volume of “Not Paul, but Jesus” was published in 1823. Fearing hostile reactions, Bentham used the pseudonym Gamaliel Smith. The second volume, which deals with the early church, and the third volume, which focuses on sexual morality, remained unpublished.

Bentham wrote more than 500 pages explaining his liberal views on homosexuality during the last 50 years of his life.  Some of these documents may have circulated among his followers, but none of it was published during his lifetime.

The first Bentham writings on homosexuality to be published were primarily secular. His 1785 essay “Offences Against One's Self: Paederasty” is considered the first document arguing for decriminalization of homosexuality in England. He reasoned that consensual sex between same-sex partners should not be punished because it does not harm anyone. The essay was not published until 1931, when a fragment first appeared in print. The full essay was finally published in 1978.

Only now are Bentham’s writings on Jesus and homosexuality coming to light. The third volume of “Not Paul, but Jesus” was not published in any form until 2013. It was released last year by the Bentham Project at University College London, which counts him as its spiritual father.

In January 2014 Bentham’s own overview of the “Not Paul, but Jesus, Volume 3” appeared as a chapter in a book published by Oxford University Press: “Of Sexual Irregularities, and Other Writings on Sexual Morality” by Jeremy Bentham. (More info at: http://ukcatalogue.oup.com/product/9780199685189.do)

A section on “Jesus’s Sexuality” is also included in the 2012 article “Jeremy Bentham: Prophet of Secularism” by Philip Schofield, director of the Bentham Project. He draws on the “Not Paul” book and another set of manuscripts to draw powerful conclusions such as this:

Bentham claimed that, unlike Paul, Jesus did not, according to any account that appeared in the four Gospels, condemn either the pleasures of the table or the pleasures of the bed. On the contrary, Jesus’s opposition to asceticism was shown in his condemnation of the Mosaic law in Matthew 9: 9–17…. Bentham pointed out that Paul’s most forceful condemnation was directed towards homosexuality. Bentham responded that not only had Jesus never condemned homosexuality, but that he had probably engaged in it. There were, moreover, many females in Jesus’s immediate circle, and again Bentham saw no reason why Jesus might not have engaged in heterosexual activity as well.

Although Bentham doggedly defended consensual sexual activity between same-sex couples for half a century, his own love life remains a mystery. The son of a wealthy lawyer, he was a child prodigy who grew up to be a brilliant and eccentric recluse, living alone in London in what he called “a state of perpetual and unruffled gaiety.” He referred to his home as his “hermitage.” He lived there with a “sacred teapot” called Dicky, a favorite walking stick named Dapple, and a beloved tom cat addressed as the Reverend Doctor John Langborn. He declared, “I love everything that has four legs,” and allowed a colony of mice to share his office. One study concludes he had Asperger Syndrome, a high-functioning form of autism. Check this link for an 1827 description of Bentham’s eccentricities.

The philosopher’s influence continued to grow after his death as his supporters spread his ideas. Most of what is now known as liberalism is rooted in Bentham’s philosophy. His diverse followers included economist John Stuart Mill and feminist firebrand Frances “Fanny” Wright, who once exclaimed in a poem, “Oh had I but the Lesbyan's lyre, / Blue-eyed Sappho's fervid strain, / Then might I hope thy blood to fire…”.

Contemporary queer theologians such as Robert Shore-Goss have recognized him too. Shore-Goss writes a section about Bentham in the chapter on “Christian Homodevotion to Jesus” in his book “Queering Christ: Beyond Jesus Acted Up.”

During his 84 years Bentham wrote manuscripts totaling more than 5 million words, and many remain unstudied and unpublished. The Bentham Project is busy recruiting volunteers worldwide to transcribe them. More words of wisdom are likely to emerge from this prophet of LGBT rights who once summed up his approach to life by saying: “Create all the happiness you are able to create: remove all the misery you are able to remove.”

Not Paul, but Jesus Vol. III by Jeremy Bentham, edited by Philip Schofield, Michael Quinn and Catherine Pease-Watkin, is now freely available to download or view online at:
http://blogs.ucl.ac.uk/bentham-project/2013/04/30/not-paul-but-jesus-vol-iii/

___
Image credit: Jeremy Bentham engraving by J. Thomson, from a painting by W. Derby (courtesy of the Bentham Project)

Special thanks for tips and background info from Mitch Gould, Walt Whitman scholar and curator of LeavesOfGrass.org, -- with a link.

Posted by Kittredge Cherry at 9:07 AM

A couple of aspects of this article are generating a lot of discussion on my Facebook page:

1) I used the word “homosexuality” in this article, even though the word was invented after he died. It is the term used by the Bentham Project itself in summarizing his ideas for today’s readers. I try to bring alive historical figures for a general readership today, and sometimes that requires linguistic shortcuts.

2) Jeremy Bentham’s remains are preserved and kept on public display at University College London, where they have been brought to a few meetings of the College Council and recorded in the minutes as “Jeremy Bentham, present but not voting.” This seemed quite interesting but distracting and already covered in great depth on many other websites, so I left it out of my article. He seems to have arranged for his body to be preserved like this partly to defy the religion-based laws against dissection of his day.