Malachy of Armagh: Same-sex soulmate to Bernard of Clairvaux 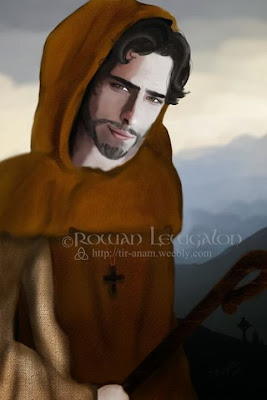 “Malachy of Armagh” by Rowan Lewgalon

Malachy of Armagh is an 11th-century Irish saint who died in the arms of his more famous soulmate, Saint Bernard of Clairvaux. Bernard showered Malachy with kisses during his lifetime and they are buried together, wearing each other’s clothes. Malachy’s feast day is today (Nov. 3).

Malachy is also the attributed author for the “Prophecy of the Popes,” which predicted that there would be 112 more popes before the Last Judgment. Most scholars dismiss the document as an elaborate 16th-century hoax. Still it’s sobering that the 112th and final pope in the prophecy is the current pontiff, Pope Francis. The prophecy remains popular with doomsday fanatics.

Malachy (1094 - Nov. 2, 1148) was born in Armagh in northern Ireland and rose to become archbishop.In Middle Irish his name is Máel Máedóc Ua Morgair. He became Ireland’s first native-born saint to be canonized.

He was primate of all Ireland when he first visited the French monastery at Clairvaux around 1139. The abbott in charge was Bernard (1090-1153), a mystical author, advisor to five Popes and a monastic reformer who built the Cistercian order of monks and nuns. Bernard is considered to be the last of the Church Fathers. They soon became devoted, passionate friends. Malachy even asked the Pope for permission to become a Cistercian, but the Pope refused.

Malachy traveled to see Bernard again in 1142. They were so close that Bernard covered him with kisses in a scene that is described well by Orthodox priest Richard Cleaver in “Know My Name: A Gay Liberation Theology”: “Bernard's account makes deeply romantic reading for a modern gay man. “Oscula rui,” Bernard says of their reunion: “I showered him with kisses.”

Their relationship had lasted almost a decade when Malachy reunited with Bernard for the third and final time. Malachy fell sick when he arrived in Clairvaux in 1148. He died in Bernard’s arms on All Soul’s Day, Nov. 2. Again Cleaver tells the details based on accounts by Geoffrey, Bernard’s secretary and traveling companion:

“Geoffrey of Auxerre tells us what happened later. Bernard put on the habit taken from Malachy's body as it was being prepared for burial at Clairvaux, and he wore it to celebrate the funeral mass. He chose to sing not a requiem mass but the mass of a confessor bishop: a personal canonization and, incidentally, an example of using liturgy to do theology. Bernard himself was later buried next to Malachy, in Malachy’s habit. For Bernard, as for us today, this kind of passionate love for another human being was an indispensable channel for experiencing the God of love.”


After Malachy’s death Bernard lived on for another five years. During this time he wrote “Life of Saint Malachy of Armagh,” which is his idealized tribute to the man he loved.

Bernard forbid sculptures and paintings at the monastery during his lifetime, but by the late 15th century the altarpiece at the Clairvaux Abbey had a painting of Christ’s baptism -- being jointly witnessed by Bernard and Malachy.

The Irish archbishop comes back to life in the striking contemporary portrait of Saint Malachy as a young man at the top of this post. It was created by Rowan Lewgalon, a spiritual artist based in Germany and a cleric in the Old Catholic Apostolic Church.

Malachy and Bernard were men of their time who supported church teachings on celibacy. People today might say that they had a homosexual orientation while abstaining from sexual contact. Medieval mystics created alternative forms of sexuality that defy contemporary categories, but might be encompassed by the term “queer.” They directed their sexuality toward God and experienced God’s love through deep friendship with another human being... such as the relationship between Malachy and Bernard.

A prayer written by Bernard’s secretary Geoffrey shows how the community at Clairvaux understood and celebrated the man-to-man love between Bernard and Malachy. He thanks God for these “two stars of such surpassing brightness” and “twofold treasure.”
___

Related links:
Saints Bernard of Clairvaux and Malachy: Honey-tongued abbot and the archbishop he loved