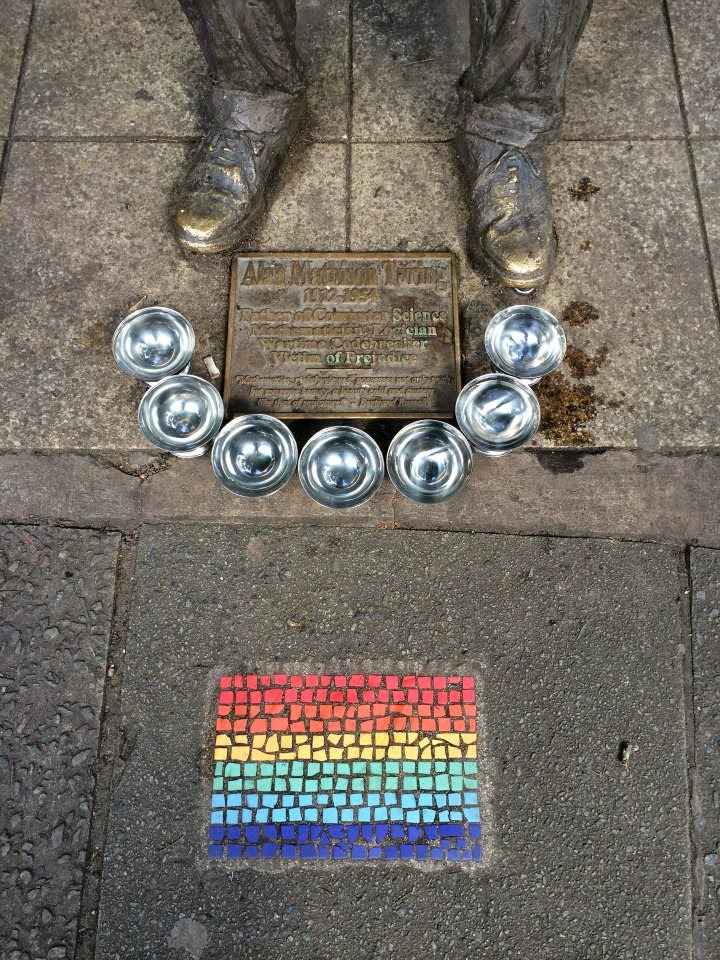 "Seven Bowls of Water for the Saint" from “Pilgrimage to the Shrine of Alan Turing” by Tony O’Connell
Alan Turing is a gay icon, pioneering computer scientist and wartime British codebreaker who is honored as a saint in new artwork by queer artist Tony O’Connell.

The artist made a photographic record of his recent trip to the Alan Turing Memorial in Manchester, England -- an act that served simultaneously as pilgrimage, performance art and political statement.

Turing’s life story is also told in the new movie “The Imitation Game,” which opens in the US on Nov. 21. It stars Benedict Cumberbatch as the eccentric genius who broke many codes.

Democratizing the idea of sacredness and reclaiming the holiness in ordinary life, especially in LGBT experience, are major themes in O'Connell's work. Based in Liverpool, O’Connell was raised in the Roman Catholic church, but has been a practicing Buddhist since 1995.

“For me Alan Turing is so important because his work shortened World War II (some believe by between two and four years) and by doing so he caused millions of lives -- on both sides -- to be saved,” O’Connell told the Jesus in Love Blog. He added that Turing “laid the groundwork for the modern computer industry and even artificial intelligence.”

“For the LGBT community the nature of his death, that he was driven to suicide by the homophobic legislation of the period not only speaks of a profound lack of government gratitude for his work but also of an enshrined homophobia which perceives a personal consensual relationship as more important than the saving of so many thousands of lives and the advances thereof. It was for these reasons I felt this most recent pilgrimage had to be to the statue of him in Manchester to regard it as a holy place,” O’Connell said.

The Turing pilgrimage photos begin with the artist at a canal in Manchester. O'Connell removes his shoes to walk barefoot on the holy ground along the canal toward the Turing memorial. 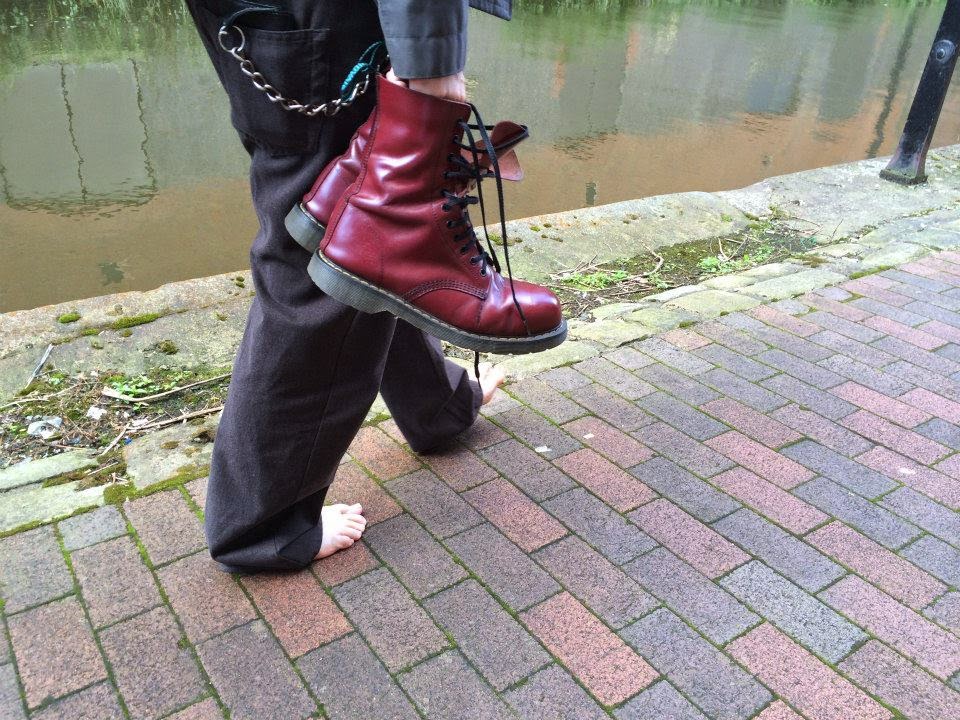 "Walking on Holy Ground" by Tony O’Connell
The heart of the memorial is a life-sized sculpture of Turing. The bronze figure sits alone on a bench located between the local gay neighborhood and the University of Manchester, where he taught mathematics. It was sculpted by Glyn Hughes.

O’Connell puts his hands together in prayer as he greets the Turing statue. He communes with the saint in various ways, offering seven silver bowls of holy water at Turing’s feet. The artist cleanses the rainbow mosaic embedded in the pavement and bathes them with holy water. The ritual ends when O’Connell pours the water into the canal in the middle of the gay village. Photographer Damian Cruikshank recorded the whole journey. 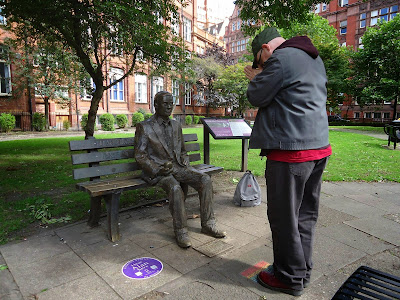 "Prostrations to the Saint" by Tony O’Connell 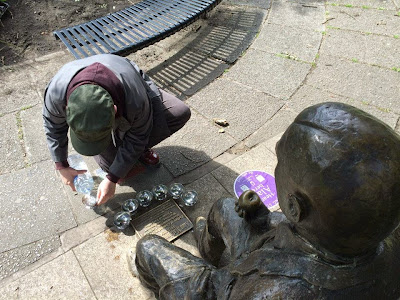 "Offering the Water" by Tony O’Connell 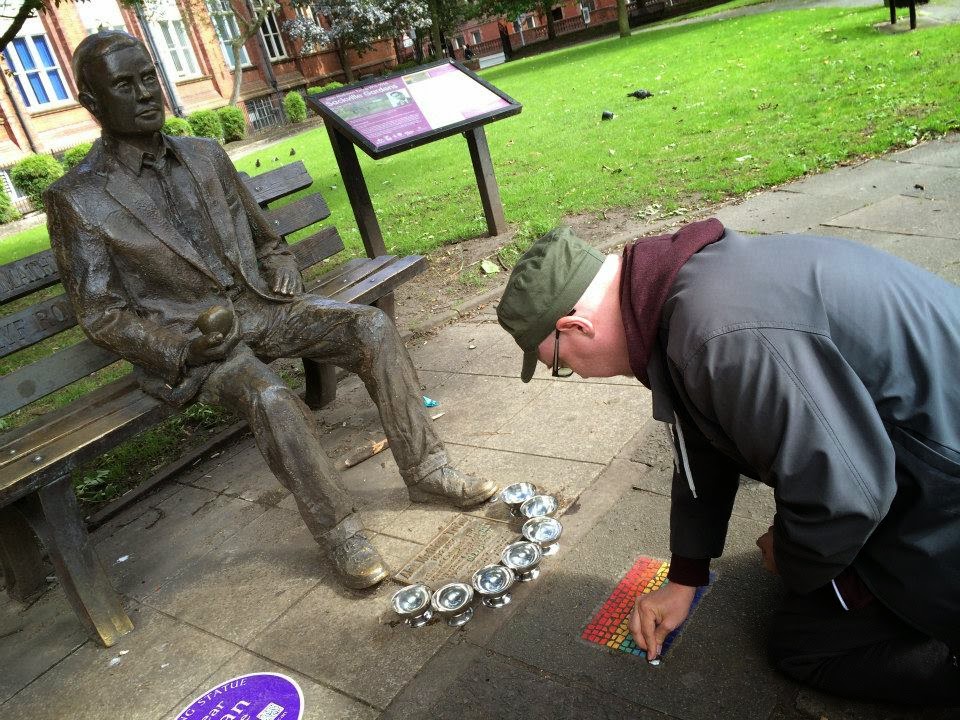 "Bathing the Rainbow with Holy Water" by Tony O'Connell 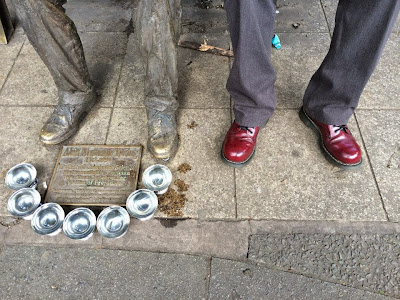 "Daring to Sit Beside Him" by Tony O’Connell 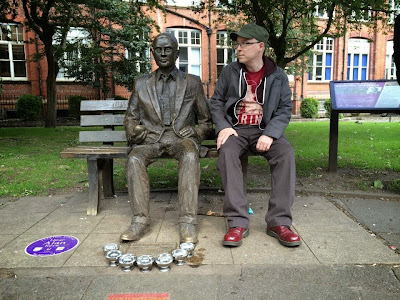 "Adoring the Saint" by Tony O’Connell
“It has often been a theme in my work to reclaim religious imagery in a secular way to discuss LGBT issues, but this time it felt more spiritual than I would have expected,” O’Connell recalled.

After returning from the pilgrimage, he created an embossed foil icon titled “Saint Alan Turing Ora Pro Nobis.” The Latin phrase, which means “pray for us,” is repeated in the traditional Litany of the Saints. 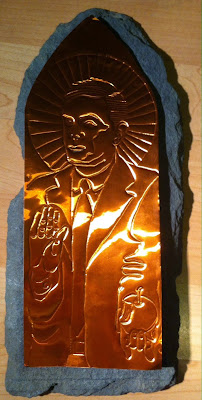 “Saint Alan Turing Ora Pro Nobis” by Tony O’Connell
Plans are underway for an exhibition of the Turing image photos, but for now the images can be seen in an online photo album on O’Connell’s Facebook page:

O’Connell is also doing an ongoing series of photos of people with haloes formed by round objects from daily life, such as light fixtures, mirrors, windows, baskets, and the sun. “We do not need the permission of anyone else to see perfection in each other,” he explained.

Turing (June 23, 1912 - June 7, 1954) played a major role in winning World War II by breaking Germany’s complex Enigma code. He also broke the code against homosexuality. His wartime work was top secret, so nobody knew of his contributions when he was tried and convicted of homosexual acts in 1952. His security clearance was revoked and he was sentenced to “chemical castration” through hormone treatments.

Disgraced and forgotten, Turing committed suicide in 1954 at age 41. He has received a growing number of honors in the years since his death. The British government officially apologized in 2009 and the queen granted him as posthumous pardon in 2013.

The definitive biography of Turing is “Alan Turing: The Enigma” by Andrew Hodges. His life is also chronicled in the documentary file "Codebreaker." The first major motion picture to dramatize his story is "The Imitation Game," which is featured in the following video trailer.”

Turing is also depicted in the 1986 stage play "Breaking the Code" by Hugh Whitemore. Derek Jacobi as Turing took London and Broadway by storm, and later starred in the BBC / PBS television film version.

“Station 6: Gay Scientist Alan Turing Driven to Suicide” from “LGBT Stations of the Cross” by Mary Button
___
For more art by Tony O’Connell on the Jesus in Love Blog, visit:


___
This post is part of the Artists series by Kittredge Cherry at the Jesus in Love Blog. The series profiles artists who use lesbian, gay, bisexual, transgender (LGBT) and queer spiritual and religious imagery. It also highlights great queer artists from history, with an emphasis on their spiritual lives.

Posted by Kittredge Cherry at 10:35 AM

Turing is also depicted in the stage play "Breaking the Code". A TV film adaptation of this was shown several years ago on PBS with Derek Jacobi as Turing.

The Cumberbatch film has been criticized as having several (though minor) historical inaccuracies as described on Wikipedia here.
https://en.wikipedia.org/wiki/The_Imitation_Game#Accuracy

I went ahead and added info about the "Breaking the Code" stage and film versions to my main article. Your link on accuracy of "The Imitation Game" is helpful.