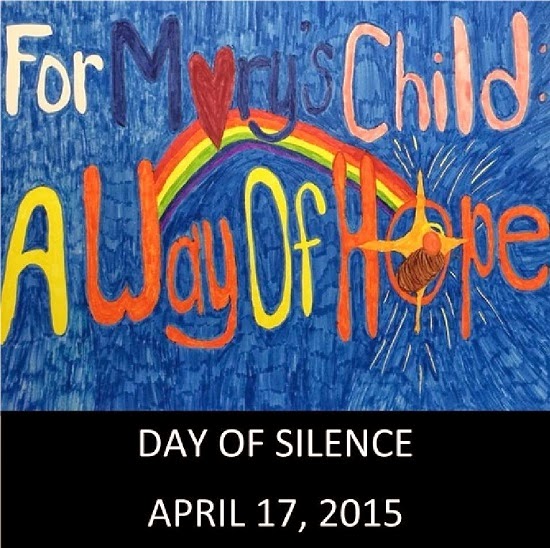 A new prayer by Jesus in Love founder Kittredge Cherry is one of the few religious voices supporting Day of Silence, a national student-led protest of anti-LGBT bullying. It happens tomorrow on Friday, April 17.


For a new version of this article, click this link to Qspirit.net:
Day of Silence Prayer: Stop bullying God's LGBTQ youth

Another LGBT-affirming spiritual resource is “For Mary’s Child,” a Facebook page calling on faith communities to support Day of Silence.

Christianity has been used to justify the harassment that Day of Silence seeks to prevent. The conservative Christian group Focus on the Family even organized an annual event in opposition to Day of Silence. Day of Dialogue, which is happening today (April 16) encourages students to speak up about “God's design for sexuality.”

Once again religious faith gets equated with discrimination based on sexual orientation and gender expression. I wrote the Rainbow Day of Silence prayer to give voice to the deeper truth that LGBTQ people are part of God’s good creation.

Silence is memory
Remembering those
Driven to suicide by bullies

Silence is solidarity
Students, family, teachers, friends
Who stand with the queer and questioning

Silence is pride, LGBTQ pride
Ignoring bullies,
Claiming our right to be
Part of God’s rainbow.

Silence is prayer
When any child is bullied,
Christ is bullied.
Listen in the silence
For God.

Silence is memory....
Remembering those who died young,
Driven to suicide by bullying
Or killed
Because of who they loved
Because of the way God created them
Because they were called
Gay, lesbian, bi, trans, queer, sodomite…
Remembering Tyler Clementi, Leelah Alcorn, Brandon Teena, Matthew Shepard, Gwen Araujo, Haylee Fentress, Paige Moravetz, and many, many more.

Silence is action….
Calling attention to how people are silenced
When bigotry is disguised as humor,
When prejudice turns into threats
And even violence.

Silence is solidarity…
Students, family, teachers, friends
Who care enough
To share the stigma,
To stand with the queer and questioning
Stopping hate with compassion.

Silence is pride, LGBTQ pride…
Not letting the bullies win.
Claiming our right to be.
With dignity
Part of God’s rainbow.

Founded in 1996, the Day of Silence is sponsored by the Gay, Lesbian and Straight Education Network (GLSEN). The first Day of Silence was organized at the University of Virginia in response to a class assignment on non-violent protest. More than 8,000 schools have participated in the event, which is held every year in April.

(Credit: The image at the top of this post comes from For Mary's Child: A Way of Hope)
___
Related links:

Day of Silence Prayer by Rev. Mike Schuenemeyer (ucc.org, 2007)
____
This post is part of the LGBT Calendar series by Kittredge Cherry at the Jesus in Love Blog. The series celebrates religious and spiritual holidays, holy days, feast days, festivals, anniversaries, liturgical seasons and other occasions of special interest to lesbian, gay, bisexual, transgender and queer people of faith and our allies.

Posted by Kittredge Cherry at 2:29 PM