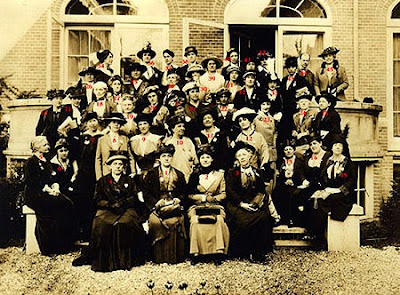 American delegation to the 1915 peace conference
One hundred years ago today the world’s longest-standing peace organization was formed -- with significant help from women who would probably be called lesbian or queer now.

The Women’s International League of Peace and Freedom traces its start to April 28, 1915, when 1,200 delegates from 12 countries convened in the Hague, Netherlands for the International Congress of Women, aiming to stop World War I and prevent future conflicts. The WILPF is gathering again now in the Hague for its 100th-anniversary conference April 27-29.

LGBT rights was added to the group’s platform in 1999, but some historians believe that lesbians were part of it from the beginning. The 1,200 who attended the 1915 conference included many unmarried women who had romantic friendships with other women.

Among them were future Nobel Peace Prize winner Jane Addams, who founded Hull House in Chicago to alleviate poverty as part of the settlement house movement. Her 40-year relationship with her intimate partner Mary Rozet Smith is included in “To Believe in Women: What Lesbians Have Done For America” by Lillian Faderman.

Also at the 1915 conference was Mabel Hyde Kittredge, author, social reformer -- and great-aunt of Jesus in Love founder Kittredge Cherry. Mabel was the beloved intimate friend of Lillian Wald, activist nurse and founder of the Henry Street Settlement in New York City. One of the books that discusses their relationship is “Lillian D. Wald: Progressive Activist” by Clare Coss.  And there are many more examples waiting to be told.

The WILPF is a secular organization that brings together women of different faiths, but making peace is itself a spiritual activity. As Jesus said, “Blessed are the peacemakers: for they shall be called the children of God.” (Matthew 5:9)

For updates on the current peace conference, visit their website womenstopwar.org.

This Day in History: International Congress of Women opens at The Hague - Apr 28, 1915 - (HISTORY.com)

____
This post is part of the LGBT Calendar series by Kittredge Cherry at the Jesus in Love Blog. The series celebrates religious and spiritual holidays, holy days, feast days, festivals, anniversaries, liturgical seasons and other occasions of special interest to lesbian, gay, bisexual, transgender and queer people of faith and our allies.

Posted by Kittredge Cherry at 9:02 PM