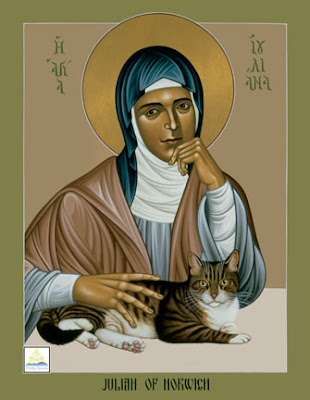 “Julian of Norwich” by Brother Robert Lentz, OFM, TrinityStores.com
Julian of Norwich is a medieval English mystic who celebrated “Mother Jesus.” It’s not known if Julian herself was queer, but some of her ideas were. Julian is often listed with LGBT saints because of her genderbending visions of Jesus and God. Her feast day (May 8) always falls near Mother’s Day (May 10, 2015).

Her discussions of Jesus as a mother sound radical even now, more than 600 years later.  Her omnigendered vision of the Trinity fits with contemporary feminist and queer theology.

Julian is considered the first Catholics to write at length about God as mother. Her profound ideas speak powerfully today to women and queer people of faith. “As truly as God is our Father, so truly is God our Mother,” Julian wrote. 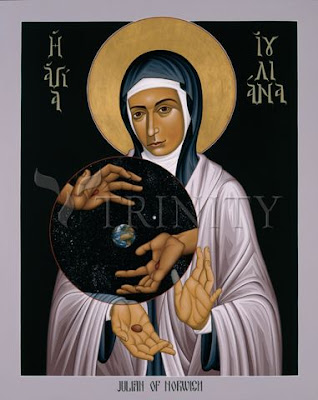 “Dame Julian’s Hazelnut” by Brother Robert Lentz, OFM, TrinityStores.com
The sacred feminine is just one of the many revelations that have endeared Julian to the public. She also uses objects from ordinary life to illustrate God’s loving, forgiving nature. For example, in one vision God shows Julian a small object like a hazel-nut in the palm of her hand. Julian writes:

“I looked at it and thought, 'What can this be?' And the answer came to me, 'It is all that is made.' I wondered how it could last, for it was so small I thought it might suddenly disappear. And the answer in my mind was, 'It lasts and will last forever because God loves it; and in the same way everything exists through the love of God'.” (Chapter 5)
A longstanding legend tells of Julian’s friendship with her cat companion, depicted in the paintings at the top of this post. As an anchoress, Julian probably lived alone. It is said that the only other being to share her room was a cat -- for the practical purpose of keeping it free from rats and mice. 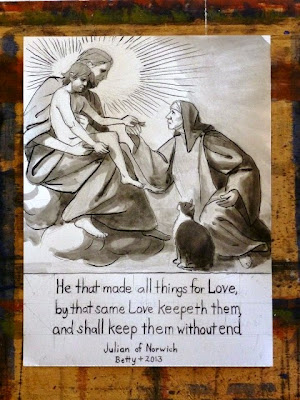 “Julian of Norwich,” a memorial drawing for his cat Betty, by Douglas Blanchard
New York painter Douglas Blanchard shows the saint with the artist’s own cat Betty in a drawing done as a memorial tribute to a beloved feline companion who died in 2013. He includes a favorite quote from Julian:

“He that made all things for love,
by that same love keepeth them,
and shall keep them without end.”

Blanchard is best known for his epic series “The Passion of Christ: A Gay Vision,” which is now available as a book. He teaches art and art history at the Bronx Community College of the City University of New York

Another icon of Julian and her cat was created by Robert Lentz, a Franciscan friar based in New York. Known for his innovative icons, he was rebuked by the church for painting LGBT saints and God as female.

Posted by Kittredge Cherry at 8:24 AM