A queer black man was the first non-Jewish convert to Christianity, according to progressive interpretations of the Ethiopian eunuch’s story in the Bible. The term translated as “eunuch” probably included a variety of sexual minorities that today would be called LGBT or queer. The account of the eunuch’s conversion in Acts 8:26-40 will be read in many churches this Sunday (May 3).

The nameless Ethiopian eunuch was a triple outsider -- a gender-variant foreigner from a racial minority -- and his experience shows that the early Christians welcomed all kinds of outcasts, regardless of race, gender identity or other differences.

Divine intervention plays a big role in the eunuch’s story from the start. It begins when an angel gives some surprising advice to Philip the deacon. He is in the midst of a successful evangelistic campaign in Samaria, but the angel interrupts with an order to leave and take a lonely desert road through the wilderness from Jerusalem to Gaza.

On the road Philip meets a stranger in a chariot reading aloud from the Book of Isaiah on his way home from worshiping in Jerusalem. The man is described as an Ethiopian eunuch (“eunouchos” in Greek), an important official in charge of all the treasury of Candace, queen of the Ethiopians. 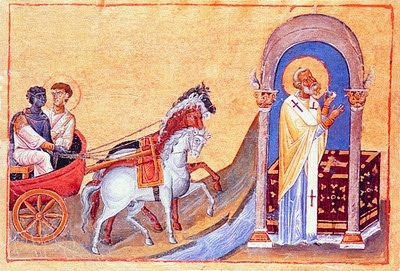 Philip and the Ethiopian Eunuch from the Menologion of Basil II, an 11th-century illuminated manuscript (Wikimedia Commons)

In contemporary usage a “eunuch” is a castrated man, but it had a broader definition in ancient times. Literally meaning “the keepers of the bed,” the eunuchs served and guarded the women in royal palaces and wealthy households. Their employers had to be certain that the eunuchs would not get sexually involved with the women they were supposed to protect, so many eunuchs were castrated men, homosexual men, and intersex folk. Many, but not all, were both castrated and homosexual. Eunuchs were trusted officials who often rose to senior posts in government.

Jesus himself used eunuch as an ancient term for LGBTQ people when he declared in Matthew 19:12: “There are eunuchs who were born that way.” (The traditional interpretation of this scripture is that Jesus was speaking of voluntary celibacy.)

When Philip sees the eunuch on the road to Gaza, the Holy Spirit again takes the initiative, urging him to run to join him in his chariot. Soon the two men are absorbed in conversation about the scripture that the eunuch was reading: Isaiah 53:7-8. The passage describes the humiliation and injustice experienced by God’s suffering servant.

The eunuch probably chose this scripture because he had just faced rejection from religious leaders when he worshiped at the temple in Jerusalem. Eunuchs were sexual outcasts in Jewish religious society, much like LGBT people in the church today. First-century Jewish law condemned homosexual acts and forbid converting eunuchs to Judaism. Deuteronomy 23:1 says bluntly, “No one whose testicles are crushed or whose penis is cut off shall be admitted to the assembly of the Lord.”

Philip used the prophecy of God’s rejected servant to tell the eunuch about Jesus as they traveled together in the chariot. Maybe he pointed out Isaiah’s prophecy that comes a few chapters later:

To the eunuchs who keep my Sabbaths,
who choose what pleases me
and hold fast to my covenant —
to them I will give within my temple and its walls
a memorial and a name
better than sons and daughters;
I will give them an everlasting name
that will endure forever.
--Isaiah 56-4-5


As the chariot passes by some water, the eunuch raises a question that LGBT people today ask as well: “What can stand in the way of my being baptized?”

There was no reason to prevent the eunuch from receiving full membership rights in the church. Philip shows no concern about the eunuch’s sexual orientation or race. Philip simply replies, “If you believe with all your heart, you may.”

The pair goes down into the water and Philip baptizes the eunuch then and there. Mission accomplished, the Holy Spirit suddenly takes Philip away. The men did not see each other again after that, but the Bible reports that the eunuch “went on his way rejoicing.” 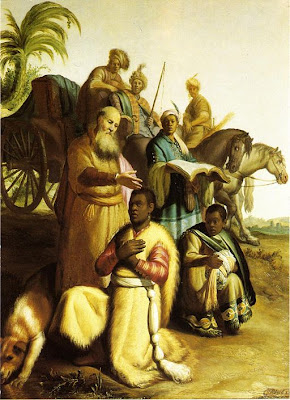 “The Baptism of the Eunuch” by Rembrandt, 1626 (Wikimedia Commons)

Many authors explore the implications of the Ethiopian eunuch for LGBT people today in books such as:

“Sex Difference in Christian Theology: Male, Female, and Intersex in the Image of God” by Megan K. DeFranza.

Jesus, the Bible, and Homosexuality, Revised and Expanded Edition: Explode the Myths, Heal the Church

,” a historical novel by Mary Renault.

Over the centuries many artists, including Rembrandt, have painted the Ethiopian eunuch’s conversion and baptism. The image of of Philip and the Ethiopian eunuch at the top of this post is from the Menologion of Basil II, an 11th-century Byzantine illuminated calendar manuscript now in the Vatican library.  It presents a beautiful image of harmony between men of different races and sexual orientations. Unfortunately a lot of other historical paintings of the Ethiopian eunuch have an undertone of racism, showing the Ethiopian as exotic or childlike.

Philip, the deacon in the story, is often confused with the apostle Philip whose feast day falls on May 1 or May 3. However St. Philip the Deacon (sometimes called Protodeacon) is honored on Oct. 11 in the Catholic and Episcopal churches and on June 6 in the Orthodox Church. Whatever the day, his example of unlimited welcome for a queer black man is an inspiration for today.
__
Related links:

Sermon on Philip and the Ethiopian Eunuch (Queeremergent)

Can Size 14 Heels Keep You Out of Heaven? (Kathy Canyonwalker)

"Born Eunuchs": Homosexual Identity in the Ancient World (Faris Malik)
____
This post is part of the GLBT Saints series by Kittredge Cherry at the Jesus in Love Blog. Saints, martyrs, mystics, prophets, witnesses, heroes, holy people, deities and religious figures of special interest to lesbian, gay, bisexual and transgender (LGBT) and queer people and our allies are covered on appropriate dates throughout the year.

Posted by Kittredge Cherry at 11:02 AM