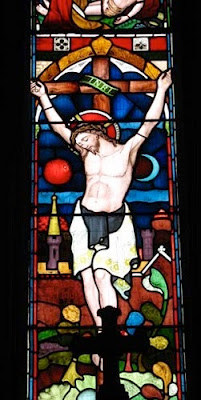 “Queer lives are not just about negotiating sin but have often been places of spiritual and physical heroism,” he says in the following interview with Kittredge Cherry, publisher of the Jesus in Love Blog.

The book opens with a chapter on Cardinal John Henry Newman as a queer martyr suffering for Christ in the ecclesiastical closet. Janes goes on to examine liturgical expressions of same-sex desire, the role of Victorian monasteries and other religious institutions in forming queer families, and how the Biblical story of Jonathan and David became a model for same-sex partnerships.

Janes writes that Christianity has ongoing significance in modern homoerotic works such as the films of Derek Jarman and the literature of Oscar Wilde. The book focuses primarily on male same-sex desire, but includes discussion of lesbian author Radclyffe Hall.

About 50 illustrations are featured in the book. They include the alluring stained-glass Jesus at the top of this post. This little-known gem was photographed by the author himself at the Parish Church of St. John the Baptist in Frome, a town in Somerset, England where accused heretic W.J.E. Bennett served as vicar in the 19th century. His incarnational theology provoked officials into putting him on trial for heresy.

Janes is professor at the University of the Arts in London, and a reader in cultural history and visual studies at Birkbeck College, University of London. His other books include “Picturing the Closet: Male Secrecy and Homosexual Visibility in Britain.”

Dominic Janes: Martyrdom in the Christian tradition has sometimes been about being killed, but it has also been used at various times to refer to states of exemplary suffering. I use the term queer to refer not only to same-sex desire but also to alternative traditions within religious practice. This book is about ‘visions’ of ‘queer martyrdom. In other words it is about the ways in which various figures have been seen as suffering in the context both of religious belief and of same-sex desire.


KC: What kind of impact has Christianity had on the evolution of homosexual/LGBTQ culture?

DJ: I have found in my own life that many Christians are wary of LGBTQ people and vice versa. This wariness sometimes extends to the notion that there is something incompatible about the two realms. I, however, think that aspects of the lesbian and gay liberation movement emerged from Christian environments that offered tacit if not explicit support for lives of witness to Christ on the part of lesbians and gay men. What those surroundings did not do, however, was to support same-sex relationships that were overtly sexual.


KC: Your book examines “a British cultural tradition that centered on an iconic image of Christ as an unmarried, suffering, beautiful, queer martyr.” Please give an example.

DJ: Eucharistic theology played a key role in the Anglo-Catholic tradition that emerged from the Oxford Movement for catholic revival in the nineteenth-century Church of England. One chapter of my book explores some of the ways in which the Mass offered worshippers contact with the perfect body of Christ. In particular I examine a heresy prosecution against W.J.E. Bennett, an Anglo-Catholic priest who wrote that for him the perfect form of Christ became visible in the Eucharist. Adorned with highly aestheticized crucifixes and other images of Christ certain churches became places where men could experience intense encounters with Jesus not only as a symbol, or as flesh, but as a perfect and (homo)eroticized body.


KC: Many Jesus in Love readers are fans of John Henry Newman, but he’s not generally considered a martyr since he died of natural causes in old age. In what way is he a queer martyr who is important for LGBT people today?

DJ: The introductory chapter of the book is called ‘The bitter tears of John Henry Newman’. This does not pronounce on whether Newman was, to use a later nomenclature, ‘homosexual’. What it does do is to look at some of the ways which he has been viewed not simply as a queer Christian but also as one who lived a life that encompassed great emotional suffering. This, it can be argued resulted from his struggles to accommodate his personal tastes within the institutional demands of the contemporary Church. As a major thinker, and indeed a Roman Catholic saint, who was buried with his best male friend, his witness is of huge importance to many members of the LGBTQ community today.


KC: British film director Derek Jarman is also popular on my blog, especially with readers in the United Kingdom. Why did you include him in a book on queer martyrdom?

DJ: The book begins in the mid-nineteenth century but I wanted to make clear that the earlier cultures that it explores continue to influence contemporary forms of art and belief. Derek Jarman was not religious in a conventional sense, but he was deeply preoccupied with Christian ideas and cultural heritage. He not only included images of martyrdom in many of his films but was held to be a queer martyr by many people because of his life of witness to LGBTQ values in the context of his premature death as a result of AIDS.


KC: You teach visual art history, so what is your favorite artwork depicting Christ as a queer martyr?

DJ: My understanding of images of Christ is that they obtain their meaning when they are viewed and appreciated. In other words if you look for Jesus as a queer martyr you will quickly find him in images that are not afraid to call attention to his suffering and to his humanity as including a sexual dimension that is open to appreciation by everyone.


KC: How does your understanding of the queer martyrs affect your own life and spiritual journey?

DJ: Queer martyrdom calls attention to the ways in which LGBTQ lives have frequently involved huge sacrifice and suffering. This is not to say that anyone should seek to suffer, let alone to die for the truth, including the sexual truths of a diverse world. However, paying attention to those who have done so can help us appreciate that queer lives are not just about negotiating sin but have often been places of spiritual and physical heroism. Thinking about queer martyrdom has been of huge importance to me in helping to bridge the gap between my Christian heritage and my personal desires.

___
Image credit:
Stained glass Christ figure by Clayton and Bell in the chancel at the Parish Church of St. John the Baptist at Frome in Somerset, England. (Photo by Dominic Janes)

Posted by Kittredge Cherry at 5:02 PM