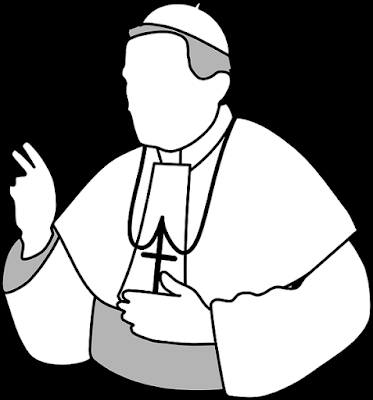 On the bright side, the Pope brought great personal warmth and a welcome focus on justice for the poor and protection of the environment. A native of Argentina, he spoke Spanish and obviously connected with many of America’s poor Latina/os. His speech to Congress was impressively intelligent, highlighting a diverse group of four Americans: Martin Luther King, Abraham Lincoln, and two Catholics who were once censured for their prophetic views: Dorothy Day and Thomas Merton. How refreshing to hear that after speaking to Congress, he turned down lunch invitations with politicians and instead dined with the homeless. A scripture reading during the Pope’s Mass at Madison Square Garden was done by openly gay comedian/journalist Mo Rocca. I also enjoyed the rare burst of positive religious coverage in the national news.

This is the same Pope who eased the Vatican’s anti-LGBT position when he took office three years ago by asking “Who am I to judge?” But the Papal visit did not always give LGBT Christians a reason to cheer.

The Pope’s most direct references to LGBT people came today in a speech to bishops gathered at St. Charles Borromeo Seminary. Criticizing same-sex marriage, he urged them not to ignore “the unprecedented changes taking place in contemporary society, with their social, cultural -- and now juridical -- effects on family bonds…. Until recently, we lived in a social context where the similarities between the civil institution of marriage and the Christian sacrament were considerable and shared. The two were interrelated and mutually supportive. This is no longer the case.”

The Pope compared the changes in family life to consumerism and the switch from neighborhood stores to supermarkets. He urged the bishops not to respond with blame and condemnation, stating, “Gratitude and appreciation should prevail over concerns and complaints.”

[Update on Sept. 30: Pope Francis undermined his own message of tolerance by meeting secretly with Kim Davis, the Kentucky clerk who refused to issue same-sex marriage licenses. On Sept. 30 the Vatican confirmed that the meeting occurred. “The news that Pope Francis met privately in Washington, DC with Kim Davis throws a wet blanket on the good will that the pontiff had garnered during his U.S. visit last week,” Francis DeBernardo, executive director of New Ways Ministry, said in a statement.]

[Update on Oct. 2: In another surprising turn of events, the Vatican responded to the controversy over his meeting with Kim Davis by announcing that Pope Francis met Davis only briefly and did not intend to endorse her views. His only "real audience" was with a gay former student (Yayo Grassi) and a few others, including his partner of 19 years. This news story -- and the mixed messages -- just keep coming!

The first sign of trouble came even before the Pope arrived, when news reports surfaced that the Pope’s advance team objected to having LGBT Christian leaders on the guest list for the White House Welcome Ceremony Sept. 23. They feared these unwanted guests would be photographed with the Pope, and the photos used as an endorsement of their activities. Dozens of LGBT church leaders were invited to the event, but the reports singled out Gene Robinson, the first openly gay bishop in the Episcopal Church and Mateo Williamson, a transgender Catholic activist. They also targeted Sister Simone Campbell, founder of the “Nuns on the Bus” movement.

In the end the conservative effort to dis-invite LGBT church leaders failed, while the Vatican Press Office denied ever making such statements.

With all this fuss I imagined the Welcome Ceremony in a room where everyone could see each other, similar to prayer breakfasts that I have attended. Silly me. It was on the White House lawn with literally a cast of thousands -- 11,000 guests. As far as I can tell, none of the LGBT church leaders got anywhere near close enough for a photo with the Pope.

On the same day that the Pope arrived, pioneering gay priest John McNeill died. For me it was a reminder of how the Vatican silenced him and expelled him from the Jesuit order for coming out and promoting LBGT rights. The timing of his death spared McNeill the pain of seeing the US media glorify the Pope while he slighted the suffering and needs of LGBT people.

The Pope gave uplifting and well-crafted speeches on universal values of justice, the dignity of all human life, and responsibility for the earth. But his broad generalizations were open to multiple interpretations and included some conservative code words that could easily be missed.

LGBT Catholic leaders were upset when he condemned “unjust discrimination” during his remarks at the White House.  It sounds good at first, but the phrase comes from a key Catholic teaching against homosexuality and has been used by US Catholic bishops to argue that there are just forms of discrimination against LGBT people.

“It is a term that has dangerous ramifications for LGBT people,” Dignity Executive Director Marianne Duddy-Burke told Buzzfeed News. She sat in the VIP section at the White House during the Pope’s remarks. “To any well-tuned LGBT ear, or anyone listening, it is support for a position many U.S. Catholic bishops have taken — which is against same-sex marriage, the right to fire married gay employees or transgender employees, the right to exclude LGBT people from adoption, and to deny LGBT people foster-care services.”

The Pope spoke repeatedly of “religious freedom,” which is fine except that this is the justification used by to defend anti-LGBT actions such as county clerk Kim Davis’ recent decision to break the law and deny marriage licenses to same-sex couples. What about the religious freedom of LGBT people of faith?

Many saw implied criticism of LGBT rights in Pope’s Sept. 25 speech to the United Nations when he said that “promoting social progress” risks becoming “an ideological colonization by the imposition of anomalous models and lifestyles which are alien to people’s identity and, in the end, irresponsible.”

In his address to the US Catholic bishops on Sept. 23, Pope Francis emphasized the need for dialogue. Indeed it would be an improvement over the Catholic hierarchy's usual harsh, one-sided condemnations of LGBT people. As a veteran of several Protestant “dialogue committees” on religion and homosexuality at the US National Council of Churches, I have grown weary of dialogue. It is a frustrating process for both sides, with change occurring slowly if at all. But even I felt renewed by the eloquence of the Pope’s words:

‘And yet we are promoters of the culture of encounter. . .Dialogue is our method, not as a shrewd strategy but out of fidelity to the One who never wears of visiting the marketplace, even at the eleventh hour, to propose his offer of love (Mt 20:1-16)’. . .

In introductory remarks before the Pope’s arrived to speak at Independence Hall on Sept. 26, Philadelphia Mayor Michael Nutter told the crowd of about 40,000: “In America, everyone has rights. Our lesbian, gay and bisexual citizens continue to fight for equality. Keep fighting for your rights. It’s a collective fight, and there are many others fighting with you.”

The Pope led Mass on Sept. 27 at the Catholic church’s huge World Meeting of Families, where the only session on LGBT families (led by celibate gay Ron Belgau and his mother, Beverley) was moved at the last minute without explanation from a room seating 10,000 to one seating only 1,000.

The Pope departed on Sept. 27 with much left unsaid. During the Interfaith Prayer Service at the 9/11 memorial, he never mentioned Father Mychal Judge, the Catholic priest and “gay saint” who died there while serving as chaplain to the New York City firefighters. He never spoke out explicitly against violence towards LGBTQ people, even though this is an international issue.

There was also cause for hope in what he did not say. He avoided condemning the marriage equality movement, as the US bishops have done. While the bishops have used "religious liberty" as a divisive argument against marriage equality, the Pope used it instead to call for mutual respect in a way that may partially satisfy both sides of the debate. In his Sept. 26 address to the Hispanic community on religious liberty, he said:

In a world where various forms of modern tyranny seek to suppress religious freedom, or, as I said earlier, to try to reduce it to a subculture without right to a voice in the public square, or to use religion as a pretext for hatred and brutality, it is imperative that the followers of the various religious traditions join their voices in calling for peace, tolerance and respect for the dignity and the rights of others.

The New Ways Ministry Blog (called Bondings 2.0) is providing daily in-depth analysis of the Pope’s treatment of LGBT issues during his visit, which ends Sunday, Sept. 27.

Posted by Kittredge Cherry at 9:14 AM

At the Interfaith Prayer Service at Ground Zero, I was hoping he would make reference to Fr. Mychal Judge who was among the first to perish on 9/11. I was disappointed that he didn't.

Diplomacy prevents the Bishop of Rome from speaking outrightly against same-sex unions. The nuances are, however, evident in his speech. It would have been wonderful if Francis spoke out EXPLICITLY against violence towards LGBTIQ persons, particularly for countries like Malaysia and many African and Middle Eastern countries, where staying safe and battling discrimination take precedence over fighting for the right to get married to our partners.