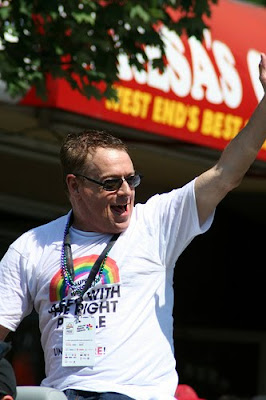 Gay rights activist Cleve Jones spoke at one of the most powerful worship services that I ever experienced -- on Gay Freedom Day 1989 at Metropolitan Community Church of San Francisco.

“There’s a huge struggle ahead of us, but we must never, ever lose sight of the reservoir of goodness that exists out there, and most especially of our own power as individuals to reach people and find that goodness and DRAG it out of them,” Jones said.

I listened to the whole service again recently while duplicating MCC-SF worship tapes for a history project. Exactly 21 years later, it’s still inspiring -- perhaps even more so because the emotions of the AIDS epidemic seem so raw in retrospect. It was especially eerie to hear the prayers spoken by friends who died two decades ago. I am sharing highlights from that service here to celebrate this year’s Lesbian, Gay, Bisexual and Transgender Pride Month.

A packed audience sang enthusiastic praise songs, even though most of the church faced many obstacles. Most of the congregation was HIV-positive, there was no effective treatment for AIDS, and many were dying. More than 500 MCC-SF members died of AIDS from 1982-97. Maybe those obstacles actually gave us a reason to sing our hearts out.

Jones spoke in detail about how he founded the Names Project and built the AIDS Memorial Quilt. He got the idea after being beaten in a gay bashing, diagnosed as HIV positive, and grief-striken by a friend’s death from AIDS. Inspired by a quilt that his grandmother made, he created the first panel in 1987. The quilt was an immediate sensation. It was nominated for a Nobel Peace Prize and has been seen by more than 14 million people worldwide.

The service sticks in my memory not only because of the sermon, but because it was probably the biggest and most enthusiastic crowd that I ever experienced in my years at MCC-SF. The sanctuary was packed with hundreds of LGBT people who were exhilarated from a day at the Gay Freedom march and festival.

I was on the clergy staff as program director at the time. I felt honored at the chance to meet Jones in the pastor’s office right before the service began. Pastor Jim Mitulski invited Jones to choose a reading to accompany his sermon. I was surprised by Jones’ Bible literacy as he immediately chose this scripture:

“Some of them have left behind a name and people recount their praiseworthy deeds; but of others there is no memory, for when they ceased, they ceased…Yet these also were godly people whose virtues have not been forgotten.”

The pastor knew right away that the quote came from Sirach 44. I had the privilege of reading this scripture aloud and introducing Jones at the service.

Music is another highlight of the tape. Music director Jack Hoggatt-St. John leads the congregation in rousing praise songs, including “Great Are You God,” “Bless Our God” and “We Are Standing on Holy Ground.” We used to sing these every week. Listening to them again 21 years later, I thought, “No wonder we loved these songs!”

There’s also a powerful version of “We Are the Church Alive,” a hymn that St. John wrote with David Pelletier. There’s nothing like hearing a church full of men with AIDS, back when there was no effective treatment, sing out,

We are the church alive, Our faith has set us free;
No more enslaved by guilt and shame, We live our liberty.

___
This post is part of an occasional series on great sermons from Metropolitan Community Church of San Francisco. Click here for the whole MCC-SF history series.

Posted by Kittredge Cherry at 2:55 PM