Remembering Hands Around the God Box 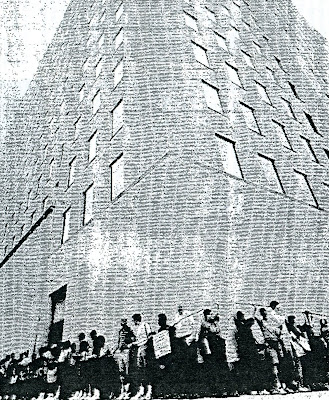 Hundreds of LGBT Christians form a ring around New York’s Interchurch Center to protest religious exclusion in Hands Around the God Box. This photo was published in the Washington Post on June 25, 1994.  More photos below.

A new version of this article is available at: https://qspirit.net/hands-around-the-god-box/

Hands Around the God Box was an interfaith prayer vigil to end religious homophobia. It was held at the Interchurch Center in New York City on June 24, 1994.

More than 500 people from 15 lesbian and gay religious groups joined hands and were linked by a rainbow ribbon that completely encircled the Interchurch Center at 475 Riverside Drive. The box-shaped building housed the headquarters of the National Council of Churches (NCC) and many other religious agencies. We are highlighting this historic event here as part of our celebration of Lesbian, Gay, Bisexual and Transgender Pride Month.

I came up with the idea for Hands Around the God Box and organized it as national ecumenical officer for Metropolitan Community Churches (MCC). I will never forget the solemn power of our combined prayers as LGBT Christians and our allies joined hands at the God Box. The building is huge, covering an entire city block, and our group of 500 barely managed to surround it -- with help from a super-long rainbow ribbon. The need for churches to accept LGBT people is just as true now as in 1994. Our prayers for full inclusion continue.

The peaceful demonstration began at noon Fri., June 24, with a short worship service. “Today 475 Riverside Drive is our Stonewall Inn. We need to turn the tables on the religious ‘police’ of our day, and fight back,” said Rev. Nancy Wilson, MCC's chief ecumenical officer.

Hands Around the God Box was coordinated by myself (Kittredge Cherry) as MCC national ecumenical officer and Kim Byham of Integrity. It was held on the 25th anniversary of the Stonewall Rebellion that launched the LGBT liberation movement. 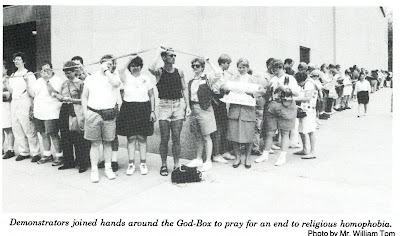 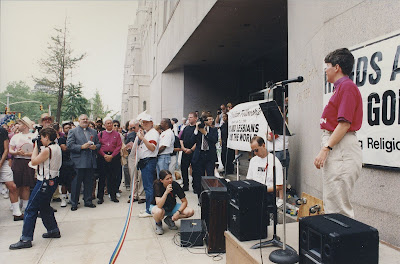 Kittredge Cherry speaks at Hands Around the God-Box, a prayer demonstration to end homophobia in the church. MCC founder Troy Perry is clearly visible in the crowd. Standing next to him is Otis Charles, Episcopal bishop who came out as gay in 1993. 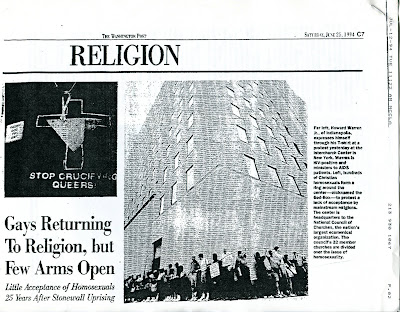 The Washington Post covered Hands Around the God Box in an article titled “Gays Returning to Religion, but Few Arms Open” on June 25, 1994.
Online references:
More Light Update, a publication of Presbyterians for Lesbian and Gay Concerns. March 1994.
http://www.mlp.org/news/update/03.94