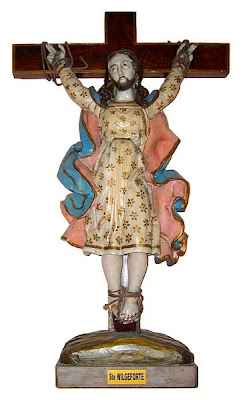 Saint Wilgefortis statue in the Church of Saint Nicholas in Pas-de-Calais, near Wissant, France (Wikimedia Commons)
“Santa Wilgefortis” from “Queer Santas” series by Alma Lopez
Saint Wilgefortis prayed to avoid marriage to a pagan king -- and her prayers were answered when she grew a beard! This gender-bending virgin martyr has natural appeal for LGBT people. Her feast day was July 20 (tomorrow) until she was removed from the Vatican calendar in 1969.

For a new version of this article, click this link to Qspirit.net:
Saint Wilgefortis: Holy bearded woman fascinates for centuries


Wilgefortis remains in standard Catholic reference works, and images of her as a bearded woman on a cross are plentiful across Europe and in Latin American folk retablos.

She probably originates more in popular imagination than in history, but Wilgefortis continues to be an object of devotion in folk religion, a favorite character in pop culture and an inspiration in queer art.

Contemporary readers have come up with many theories about Wilgefortis. She has been interpreted as the patron saint of intersex people, an asexual person, a transgender person, a person with Polycystic Ovary Syndrome or a lesbian virgin.

Legend says that Wilgefortis was the teenage Christian daughter of a king in medieval Portugal. She had taken a vow of chastity, but her father ordered her to marry a pagan king. She resisted the unwelcome marriage by praying to be made repulsive to her fiancé. God answered her prayers when she grew a beard.

Unfortunately her father got so angry that he had her crucified and Wilgefortis joined the ranks of virgin martyrs. The church has promoted “virgin martyrs” as examples of chastity and faith, but lesbians and other queer people recognize them as kindred spirits who do not engage in heterosexual activity. 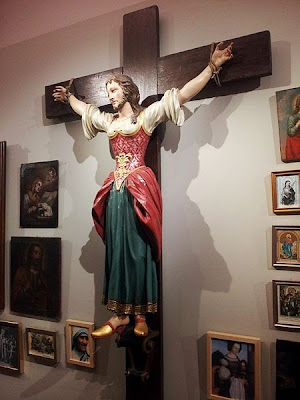 Saint Wilgefortis in the Museum of the Diocese Graz-Seckau in Graz, Austria, 18th century (Wikimedia Commons)
Her veneration began in 14th century Europe and grew until the 16th century, when her story was debunked as fiction. People continued to worship her despite frequent opposition by church officials. She was honored all across Europe, and in some places her popularity rivaled the Virgin Mary. Wilgefortis stayed on the official Vatican calendar until 1969. Scholars suggest that her legend arose to explain the Volto Santo of Lucca, a famous Italian sculpture of the crucified Christ in a long tunic that medieval viewers thought was a woman’s dress.

The history is explored in the book “The Female Crucifix: Images of St. Wilgefortis Since the Middle Ages” by Ilse E. Friesen., professor of art history at Wilfrid Laurier University in Canada. She traces the emergences of increasingly female crucifixes over the centuries, focusing on the he German-speaking regions of Bavaria and Tyrol, where the veneration of Wilgefortis reached its peak.

The name Wilgefortis may come from the Latin “virgo fortis” (strong virgin). In Spanish she is Librada -- meaning “liberated” -- from hardship and/or husbands. She also goes by a bewildering variety of other names. Her alternate English name Uncumber means escaper. In addition, she is known as Liberata, Livrade, Kummernis, Komina, Comera, Cumerana, Ulfe, Ontcommen, Dignefortis, Europia, and Reginfledis. In Barcelona (Spain), local people honor Múnia de Barcelona, a legendary saint who is similar to Wilgefortis. Her feast day day is Feb. 28.

The saint speaks for herself in singer-songwriter-pianist Rebecca Clamp's song, “St. Wilgefortis.” Clamp is originally from Cambridge, England, and moved to Helsinki, Finland. She engages in a sweetly quirky dialogue with the saint in a song and concludes:

The saint is presented in two incarnations -- as Wilgefortis and as Liberata -- in the “Queer Santas” series by Chicana artist Alma Lopez. The series grew out of the artist’s insight that female martyrs may have protected their virginity to the death not so much out of faith, but because they were lesbians. Lopez paints Wilgefortis/Liberata as masculine women in crucifixion poses. They look like butch lesbians, liberating themselves by rejecting feminine appearance and traditional gender roles.

, a graphic novel by Linda Medley, features a nun from the order of St. Wilgefortis, an entire convent full of bearded women! 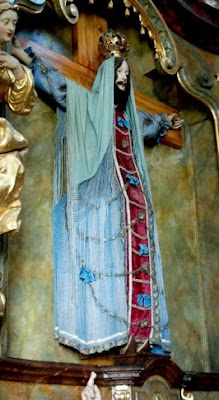 St. Wilgefortis in the Chapel of Our Lady of Sorrows at the Loreta Sanctuary in Prague, Czech Republic. Photo by Curious Expeditions.
___
Related links:

Thank you for letting us know about this very interesting saint! It's too bad that hir historicity is questionable at best, but that doesn't make the story itself any less delightful.

(It can be a good thing for the Catholic Church to, ah, "officially retire" saints of dubious historicity. St. Catherine of Alexandria is a good example -- she's pretty clearly a co-option of the real historical person Hypatia of Alexandria. The story of Catherine is that she was a Christian murdered by an angry mob of pagans, while the real Hypatia was a pagan murdered by an angry mob of Christians. So retaining St. Catherine of Alexandria erases a real person and conveniently blames the evils committed by some Christians on The Other.)

Wednesday, your comparison to St. Catherine of Alexandria is interesting. I share your regret that Wilgefortis is probably not a real historical figure, but she certainly seems to be a popular archetype in the human heart.

I revised the text of this post by adding the possibility that Wilgefortis was asexual after reading a comment about that over at Patheos.com, where this post was highlighted. There are so many possible explanations for the mysterious bearded lady… all of them shedding light on different aspects of human sexuality and gender!

I am inclined to think St Wilgefortis was a real person, and most probably intersex. There are numerous encounters in history where the 'establishment' has hidden away queer and 'unhealthy' people - but countered by local communities who have accepted the outcast, and at times elevated them to honour and even sainthood. It should be remembered that in earlier Christianity the 'cult' of sainthood was invariably a very local affair.

I appreciate the reminder that saints originally rose from the grassroots and were recognized only on a local level. May Saint Wilgefortis bless your work on behalf of intersex people!

What an interesting figure.

I think it's quite likely that Wilgefortis was an intersex person. She might have been a genetic boy affected with severe hypospadias or other ambiguous genitalia. I speculate that she was assigned to the female sex at birth. She would have been raised as a girl, but gone on to develop male pubertal characteristics in her teenage years, which would coicide with her unwelcome marriage and prayers for deliverance. It's a theory which could fit the facts, though I have to say that the Wikipedia theory, that the earliest depictions of her were actually supposed to be Jesus, takes some beating.

There is no reason whatever why intersex people should be any less spiritual or devotional than "ordinary" people. What makes Wilgefortis so interesting is that there seems to be a relative paucity of such people in Christian hagiography.

I am interested in who might be the patron saint of male crossdressers. Why should it be considered highly laudable for Joan of Arc to dress and adopt the role of a man? Every French village has a cafe named after her. Why doesn't she have a male counterpart?

Personally, I can seriously identify with scholarly figures who would spend hours in quiet contemplation, illuminating manuscripts or translating scriptures. On the other hand, while that would satisfy the intellectual (and spiritual) sides of my brain (and my work is something like the modern equivalent), it would do nothing whatever for my emotional side.

Your theories on Saint Wilgefortis are scientifically believable, Vivienne. No, there’s no reason why intersex people should be less spiritual. In fact, there is a reason that they should be more spiritual -- because they don’t fit in easily so they are forced to reflect more on life.

As far as crossdressing saints, there are certainly more women who dressed as men than the reverse. Perhaps it’s because women had fewer rights and had a greater need to pass as men in order to escape gender constraints. I will say that some of the traditional attire for male priests and monks does have a distinctly feminine quality.

Here’s a link to info on crossdressing saints, although as I mentioned they are mostly FTMs.

Hi Kittredge. Thanks for your reply, and the link, which I followed. You're right, of course, that all the saints mentioned are women who adopted the male role. I wholly agree with you that the likeliest reason for this is the enormous social gap between women and men throughout much of human history (which still prevails in many parts of the modern world).

I also agree that vestments do indeed have a feminine element to them: one of the traditional fabrics in the attire of Cardinals is lace. But even to a lesser extent, "ordinary" church vestments often consist of rich, heavy, tactile fabrics. I heard a BBC radio interview with a vicar choosing new vestments where he seemed a tad more enthusiastic than I would have expected about his new acquisitions. I suppose they don't call them "men of the cloth" for nothing!!

My theory is that she was genetically male and had 5-alpha-reductase deficiency. Such affected individuals are phenotypically female at birth and then at puberty, the hormone surges cause rapid development into a male phenotype. The so-called guevedoces of the Dominican Republic are excellent examples of people affected by this syndrome.