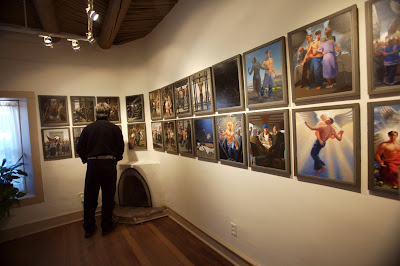 Doug Blanchard’s gay Passion series fascinated viewers. (Photo by Dorie Hagler)
Art can reach people where rational discussion can’t—especially when it comes to Jesus Christ.
A gay version of Christ’s Passion was the hit of the recent National Festival of Progressive Spiritual Art in Taos, NM. (Update in April 2011: Click here to see the whole series online now.)
Opening-night crowds jammed around the gay Passion series, which shows Jesus as a contemporary gay man jeered by fundamentalists, tortured by Marine look-alikes and rising again to enjoy homoerotic moments with God and friends.
The art exhibit was based partly on my new book Art That Dares: Gay Jesus, Woman Christ, and More. It is filled with color images by 11 contemporary artists from the U.S. and Europe, and many of the artists were in the opening-night crowd.

The Passion of Christ: A Gay Vision by New York painter Douglas Blanchard provoked thoughtful discussions and impressed art collectors at the Taos show. He became the festival’s top seller, with almost half of the panels in his 24-part Gay Passion series snapped up by collectors.
The success of the festival proved to me that many people are hungry for progressive Christian images, even though conservatives have tried to censor them. Art that dares to show Jesus as gay or female has been censored or destroyed. That’s why I gathered these 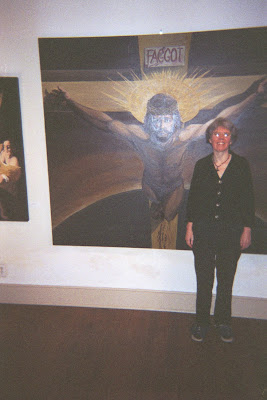 beautiful, liberating, sometimes shocking images into a book—to ensure that they would be available. The crowds and sales at the festival were a real affirmation.


Art sales set a new one-day record for JHS Gallery on opening night, when at least 350 people jammed into the gallery while the Taos Gospel Choir sang. A local newspaper editor declared it to be the biggest art opening to hit Taos in the last 10 years. Among those who covered it was the New York Sun.
More than half of the 11 artists featured in Art That Dares were on hand for the opening. In addition to Blanchard, I got to reconnect with Atlanta painter Becki Jayne Harrelson, whose notorious “faggot crucifixion” was on display, and three artists who use female Christ imagery: Sandra Yagi of San Francisco, Jill Ansell of New Mexico and Janet McKenzie of Vermont.
Thanks to curator Jodi Simmons of JHS Gallery, the Taos exhibit showcased many other artists in addition to those in Art That Dares. The book focused on queer and gender equality, while the exhibit addressed the full range of progressive issues including war, racial justice and technology.
While I was in New Mexico, many people urged me to do a blog on queer spirituality themes. I've been wanting to blog for a long time, but I didn’t want to start until I was ready to keep it up on a regular basis. Now the time has come. I plan to post once or twice a week.
A new online gallery of images from the book and exhibit is online now at the author’s website, JesusInLove.org.
I’ll be posting more photos and stories from the Taos Art Festival, as well as commentary on current events, spiritual reflections, and updates on my future projects. Check back again soon!
Posted by Kittredge Cherry at 9:05 PM

This blog is wrong in so many ways...a better use of your time would be reading your Bible.

Found your site on Google Search, looking for artwork, comicbook illustrations, and this page caught my eye.--- signed up for your newsletter.